Several weeks ago I had an opportunity to revisit the shores of Lake Marion, a large impoundment of the Santee River about 50 - 60 miles west of Charleston. I was stunned to 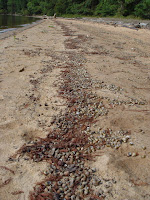 discover the sandy beaches covered by wracks composed almost entirely of millions of viviparid shells (figure at left). The shells were a striking mixture of approximately 95% Viviparus subpurpureus and 5% V. georgianus. This is, to my knowledge, the first report of V. subpurpureus in an Atlantic drainage, as well as the first report that this species can be invasive.

Lake Marion and its sister, Lake Moultrie, were impounded for hydroelectric purposes in the early 1940s. I have visited them casually every couple years since the early 1980s, and had no observations of viviparids through the mid-1990s. I first noticed Viviparus georgianus in Lake Moultrie in 1997, but didn't think too much about it. Georgianus is a fairly well known invader, distributed from Florida up to Quebec according to Clench & Fuller (in Burch), but "mainly in the Mississippi River system."


Viviparus subpurpureus is a similar animal, although its shell has more flatly-sided whorls and appears more triangular in outline than globose. Subpurpureus is very rarely banded, while the shell of V. georgianus almost always bears color 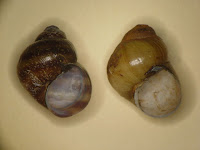 bands. Shells of the two species are compared at right. Burch quotes Clench & Fuller's range for V. subpurpureus as including the Mississippi River system north to Iowa, plus several river systems in Texas, Louisiana & Mississippi.


The co-occurrence of both viviparid species in a single lake is rather spectacular. Mr. Larry Woodward of the USFWS Santee National Wildlife Refuge on the north shore of Lake Marion is a native of the area, and does not recall seeing snails (of any sort) until the lakes suffered record low water in the summer of 2002. At that point, living snails were very common on exposed aquatic vegetation. Large volumes of dead shell only began materializing on the beaches this summer, apparently related to the rise in water level that has occurred over the last 12 months. Mr. Mike Spivey, the Manager of Santee State Park on the south shore of Lake Marion, also first noticed snails in the summer of 2002, and similarly attributes the current abundance of dead shell to the rise in lake levels.


Although most individuals in the small sample of V. georgianus I collected in 1997 were around 30 mm standard shell height, essentially all the beach shells I observed earlier this month, of both species, were in the 13 - 20 mm range. This seems consistent with a year of growth. All were quite clean and beginning to bleach a bit, apparently dead for several months. Both Lakes Marion and Moultrie have suffered serious aquatic weed problems in the recent past. Hydrilla was first discovered in the 1980s, and by the mid-1990s covered more than 40,000 acres of the 156,000 lake system. I think the best hypothesis is that viviparids may have been introduced to the lakes along with the weeds in the early to mid-1990s, but that their population densities remained below detection. Some aspect of the severe drought of 2002, followed by the high waters of 2003, caused viviparid populations to explode to the point that they have called attention to themselves.


To be complete, I should also mention that the large viviparid Bellamya japonica has also been

reported in South Carolina recently. My colleague Jim Glover of the SC Department of Health & Environmental Control sent me a specimen collected in June from Lake Greenwood, an impoundment of the Saluda River about 40 miles west of Columbia. Although this was my first record of Bellamya in SC, Jay Cordeiro has called my attention to a 1996 record from the Jonesville Reservoir near Spartanburg.


Bellamya (above, 64.5 mm) reaches a much larger adult size than Viviparus and is another famous invader, native to the orient and apparently spread by "water garden" hobbyists. It is often referred to the genus "Cipangopaludina," but I agree with Doug Smith [Nautilus 114: 31-37] that Bellamya has priority.


I don't know of any obvious adverse environmental consequences attributable to viviparid invasion, and it's tempting to write off big impoundments like Lakes Marion and Moultrie as disturbed environments in any case. But I would be curious to hear from any of my colleagues regarding your observations on invasive viviparids in other regions of the country, especially any other records of V. subpurpureus invasion.

Posted by Rob Dillon at 6:10 PM No comments: