Just One Species of Ferrissia

Editor's Note:  A substantial fraction of the material in this essay was subsequently rendered obsolete by the 2010 research of Walther and colleagues.  See my post of [8Dec10] for more.

I'm pleased to report the publication of a paper by J. J. Herman and myself in this month's Journal of Freshwater Ecology, "Genetics, shell morphology, and life history of the freshwater pulmonate limpets Ferrissia rivularis and Ferrissia fragilis (1)." In this work we offer evidence that populations of the two most widespread limpets in North America reproduce entirely by self fertilization, and that the shell morphological criteria by which they have been distinguished are the result of ecophenotypic plasticity. We suggest that the nomen Ferrissia fragilis is a junior synonym of F. rivularis. 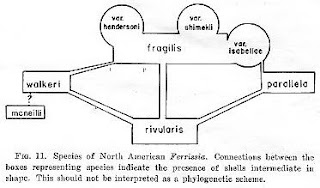 The modern taxonomic history of the North American Ancylidae has been one of consolidation (2). Basch (3) recognized five species of Ferrissia (rivularis, fragilis, parallela, walkeri and mcneilli), noting as he did that "ecological phenotypes are numerous, and plasticity of shell form has been remarked upon many times." (See Basch's charming figure above). More recently Andrea Walther's sequence data have suggested just two Ferrissia lineages, which she has correlated with the rivularis and fragilis phenotypes and life habits (4).

But our discovery of asexual reproduction voids the biological species concept, and necessitates a retreat to the morphological. And since there seems to be no heritable component to the shell characters conventionally used to distinguish rivularis and fragilis (see figure below), it would appear that a single-species model fits the situation best. 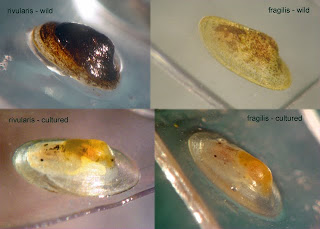 I gather that Andrea and her advisor Dairmaid O'Foighil prefer to retain the two species model, under one of the many species concepts based on gene trees. But the limitations of the various phylogenetic and cladistic species concepts are well known (5).

The situation with Ferrissia in North America seems biologically analogous to that of the better-studied Ancylus fluviatilis in Europe. A phenotypically plastic response of shell height and shell thickness to current and substrate has been well known in A. fluviatilis populations for years, and Städler and colleagues (6) documented asexual reproduction in the mid-1990s. More recently Pfenninger and colleagues (7) have reported that 103 populations of A. fluviatilis sampled from across Europe can be grouped into four DNA clades. Yet European workers seem content to identify all their limpet populations by the same nomen, Ancylus fluviatilis.

If there were a reliable correlation between Andrea's gene trees and any criterion by which rivularis and fragilis have been distinguished in the past, an argument could be made for retaining both nomina as labels for asexual lineages. But Andrea misclassified the samples we sent her in 2007 from our North Saluda River population as F. fragilis, even though they were collected from a rocky stream and bore robust, acutely conical shells. One species of Ferrissia it would seem to be.

(2) See the FWGNA archives of July '07, "Phylogenetic sporting" in the genus Laevapex.

(4) Although I have seen some data from Andrea's recent Ph.D. dissertation at the University of Michigan, I have not seen the work itself. This is from my personal communication with Andrea and her advisor, together with the abstracts of talks she has given in recent years.