About five or six years ago my family gave me a modest kayak as a Christmas present, and shortly thereafter I began carrying it with me on field trips. The first thing I learned was, "Paddle upstream." 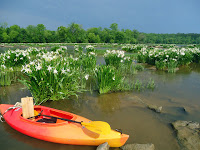 The second thing I learned was, if at all possible, do not try to collect freshwater snails from a kayak. There is almost no space inside, and freedom of movement is very constrained. And even such an elementary operation as, “to pick up a submerged stick” without at least two fixed points against which to pick is a genuine education in basic physics.

But much of the freshwater habitat around Charleston is not really “wadeable.” And it is amazing how rarely the portions of large rivers that are readily accessible by motorized vehicle constitute especially productive freshwater snail habitat. And how often the spot just across the river, upstream 100 meters, looks absolutely perfect, at least staring at it from a boat ramp, with one's hands on one's hips. So I have found my kayak quite useful simply as a mode of transportation, to carry me somewhere better, so I can get out. 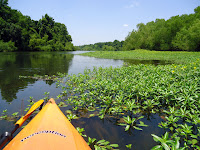 That being said, there are some habitat types that are indeed conveniently sampled by kayak. Swampy areas with soft and flocculent bottoms come to mind, and especially aquatic macrophytes, either the submergents like Elodea and Hydrilla, or floating emergents like water lilies, pondweeds, and Ludwigia (above). Mats of such vegetation can sometimes float over treacherous bottoms, and I can't think of any better method to sample the little pulmonates and hydrobiids they often shelter unless from a low, shallow-draft boat like a kayak.

The idea of tying a dipnet onto the stern of my kayak was pretty obvious. I took a triangular kick net off its pole because it fit under those big black cargo bands on the stern of my particular brand of kayak, but I suppose a D-shaped net head would have advantages as well.

When I brought my first net samples into my kayak, however, I discovered that there was really no place to sort through them except in my lap. And if I was holding my net with one hand and picking through its contents using forceps with the other, where 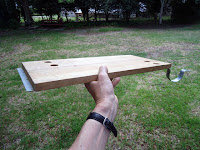 would I perch the little vials I was trying to transfer my little pulmonates and hydrobiids into? And what to do with my paddle?

So I cut myself a 20” sorting table out of 1x10” board, and drilled a couple holes in it to hold 21x70 mm vials. On one edge of the board I attached a metal flange, which hooks under the lip of my kayak. And on the other corner I attached a metal bracket, which holds my paddle.

The paddle is actually supported both by the bracket on the corner of my sorting table and by a coat hanger I’ve bent into a hook and attached to the bow of my kayak (visible in the Ludwigia shot above - click for larger). Thus the weight of the paddle on the one edge of my table keeps the metal flange on the other edge firmly hooked under the kayak lip.

The picture below shows the sorting table in place, counter-weighted by the paddle (click for larger). I keep extra vials in an ice cube tray underneath my seat. I always wear forceps on a string around my neck, regardless of whether I am on land or sea. When I’m not sampling I slide 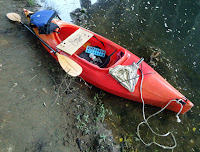 the sorting table behind my seat, where it doubles as a backrest. (I took the factory-installed backrest out of the kayak several years ago.) The nice photo of spider lilies on the Catawba River at the top of this post shows the table in its stowed position.

That's really all the advice I've got, except for the usual, generic reminders about a life jacket, a hat, and sunscreen. Oh, and paddle upstream first. I'm serious about that.
Posted by Rob Dillon at 8:53 PM 1 comment: