The Clean Water Act at 40

I was born and raised in the Shenandoah Valley of Virginia, in a geographical oddity known as Waynesboro, 100 miles from everywhere.  But near enough, by happy fortune, to the South River (a tributary of the South Fork Shenandoah) as it cascaded freshly down from the Blue Ridge, and slowed upon entry into the verdant valley below [1].  And I spent some of the happiest days of my youth swimming, fishing, rafting, and grabbing everything slick and squirmy I could grab out of those gentle waters, from snakes and turtles to crayfish, bugs, and (of course!) snails.

In the riffles the benthic macrofauna was dominated by the pleurocerid Leptoxis carinata, with Physa common in the pools, limpets occasional and Helisoma anceps rare.  I remember being frustrated, even at the age of twelve, that I could not identify the freshwater snails of the South River.  I had a tremendous infatuation with the natural world around me, and could find guidebooks to help with the birds and reptiles, the trees and the wildflowers, and most shells – certainly the marine ones.  But not the freshwater snails.

In any case, the economy of Waynesboro was not as agricultural as I have made it sound above.  During the 1920’s two major textile-related plants joined a number of smaller factories already humming in the town – DuPont (manufacturing acetate fibers such as nylon, orlon & lycra) and Crompton (corduroy, velveteen & nylon velvets).  The attractions of this otherwise rural setting included cheap land, an eager work force, good rail transport, and (alas!) the South River to dump crap into.

The DuPont and Crompton plants (and several others, to be fair) stretched by the river for about a mile along the east side of town.  DuPont discharged large quantities of elemental mercury in among a witch’s brew of other chemical wastes generated as a consequence of routine manufacturing processes, over quite a number of years.  The several Waynesboro plants also featured very tall smokestacks that dumped huge amounts of black smoke into the sky.  I didn’t like it – nobody did.  But waste seemed like an inevitable consequence of economic prosperity [Photo below, Note 2]. 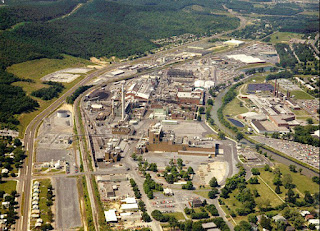 By now you will have gathered that The Dillons lived upstream from the DuPont plant.  My friends and I occasionally rafted inner tubes a mile or so downstream to the Hicks Bridge, at the south entrance of the plant.  I don’t remember any signs specifically warning us of hazardous conditions further downstream – I think this was generally understood.  But in any case, had I ventured to gather any personal observations regarding the benthic macrofauna of the South River below the Hicks Bridge at any time in my young life, my mother would have found out quite promptly, which would have been hazardous enough, to my backside.

The Clean Water Act was signed into law on October 18, 1972.  I was a senior in high school by that time, and the next summer off to college at Virginia Tech, never to live in Waynesboro again.  Although my wife and I still have family in the area, I have lost that intimate connection I developed with the South River in my youth, carried away by other rivers less gentle.

The rebirth of the river downstream from the Waynesboro plants, in my absence, has been astonishing.  Mercury contamination was discovered in fish samples taken from the South River in 1976, precipitating a legal battle between DuPont and the state ultimately resolved in 1984.  As part of the settlement DuPont agreed to fund a “South River Science Team” [3] to serve as a focal point for technical and scientific issues concerning mercury contamination.  By 1989, the water quality had improved to such an extent that the state began stocking the South River at Waynesboro with brown and rainbow trout.  Waynesboro is now home to two annual celebrations of the South River, the Virginia Flyfishing Festival and the Waynesboro “Riverfest” [4].

Last summer I launched my kayak at the Apple Acres bridge near my childhood home and paddled through the entire City of Waynesboro, passing the DuPont site and the sites of several other industries only slightly less spectacular [5], emerging to call my brother-in-law at Bridge Avenue, about five miles downstream.  The most memorable features of my trip were the fly fishermen quietly angling in the shadows of the industrial smokestacks.

The river looked pristine to casual inspection – Leptoxis carinata uniformly abundant through the river section I paddled.  Downstream from Waynesboro I pulled out and collected six species: Leptoxis, Physa acuta, Ferrissia fragilis, Helisoma anceps, H. trivolvis and Lymnaea humilis.  So in addition to the four species that have likely recolonized from upstream refugia, we seem to have added two species from downstream.  The freshwater gastropod fauna of the South River is today indistinguishable from that of any other similar-sized river in the upper Shenandoah Valley.

The Clean Water Act worked.  Sometimes I fear that the environmental community has earned a reputation for shrillness – always focusing on impending disaster, prophesying the end of the world.  It might help our credibility a bit if we acknowledged the real successes of the last 40-50 years and admitted, as bad as things might look today, we have seen worse.

This past summer I spent a couple weeks surveying the freshwater gastropods of New Jersey.  So prior to my departure I mapped a grid of sample sites to cover the various physiographic regions and drainages of The Garden State, mixing lotic and lentic habitats, large and small.  I paid attention to access, of course, preferring boat ramps, parks, and public spaces if possible.  Water quality concerns did not, however, enter my mind.

And so the afternoon of September 11, 2012 found me at a public park on the bank of the Raritan River in Manville, NJ.  The water was clear, apparently clean, and inviting.  The luxuriant macrobenthic fauna included 11 gastropod species, making it the second-richest site I was to visit that entire week.  Only a subsequent conversation with a passing fisherman reminded me of the history of that place, the site of the former Johns-Manville manufacturing facilities for asbestos insulation [6].

[1] The black & white photo above is a 1966 image of the South River as it enters Waynesboro.  That’s the old “Apple Acres” bridge in the background.  Scanned from Massie, E.S. and C. Skinner (2009)  Images of America: Waynesboro.  Arcadia Publishing.

[5] The Crompton plant went out of business in 1984, and has now largely been demolished.  DuPont sold its Waynesboro plant to the InVista Corporation a few years ago, and manufacturing operations continue at a reduced scale.

[6] I don’t have any independent knowledge of the Johns-Manville situation on the Raritan River in New Jersey, but here’s a link to the Wikipedia entry [html].
Posted by Rob Dillon at 4:36 PM No comments: