Looking back on my long and checkered career as a malacologist, I think I first developed my mental image of Pleurocera ebenum on a brief side trip to the Falls of the Cumberland in the summer of 1988.  There in the Kentucky State Park, above the falls only – not below – I found the rocks covered with pale, large-bodied pleurocerids bearing heavy, triangular shells that I assumed must be P. ebenum [1].  See the example at far right below.

Well, they certainly matched Figure 370 [2] in Burch [3], second from left below.  And Burch must have Goodrich’s collections at his fingertips for reference, yes?  And Goodrich [4] specifically listed “Cumberland River above the Falls” in the range of Goniobasis (aka Elimia, aka Pleurocera) ebenum, yes?

So the FWGNA Project began our initial surveys of the Cumberland drainages about ten years ago, and in the last couple years, as we have sewed up the Green River and the Kentucky River further north, The Cumberland has increasingly come into focus.  Branson [5] promised us that P. ebenum would be “common” in Kentucky, publishing the (rather shabby) figure 27 third from left in the figure above.  And this is the description Branson provided in his key to identify it [6]:

So indeed, as our survey has progressed, we have found populations of pale, large-bodied pleurocerids bearing heavy shells “obtusely conical, smooth, spire relatively short” in mid-sized rivers and streams all over the Bluegrass State, and Middle Tennessee as well.

And almost everywhere we found populations of P. ebenum, we discovered smaller, darker-bodied populations of Pleurocera simplex in small creeks upstream, bearing gracile shells with higher, more slender spires, convex even to the point of being teardrop-shaped in their outline.  Scroll down to Figure J at the bottom of last month’s post to see a typical example.  Upon careful study, we simply have not been able to draw a line between simplex populations upstream and ebenum populations downstream, anywhere.  It has become apparent that the simplex/ebenum relationship must be yet another case of cryptic phenotypic plasticity (CPP), and that ebenum (Lea 1841) is best considered a subspecies [7] of simplex (Say 1825), following the model laid down for us in the Duck River Lithasia by Goodrich [8].

It was only very recently, quite late in the entire process, that I actually read Isaac Lea’s 1843 description [9] of Melania [10] ebenum:

The “habitat” Lea gave surprised me, a bit: “Robinson County, Tenn. Dr. Currey.”  Tennessee has no constituent “Robinson” County, but a Robertson County was organized in 1796 about ten miles north of Nashville.  The county lies on a plateau draining west to the Red River, entering the Cumberland at Clarksville, about 65 miles downstream from Nashville.  There isn’t much mid-sized riverine habitat especially suitable for P. ebenum in Robertson County.

I was also surprised by Lea’s remarks that his M. ebenum were “very dark-coloured” with “convex” whorls and “usually purplish on the whole of the inside of the aperture.”  Those characters sound much, much more like typical Pleurocera simplex to me.

Did Lea have pale, triangular, heavily-shelled specimens on his desk when he described his Melania ebenum in 1841 [9]?  That would make the taxon a subspecies of P. simplex today.  Or were Lea’s specimens indeed dark, gracile, and teardrop shaped?  Is it possible that Lea’s ebenum is just a simple synonym of P. simplex today, rightly consigned to the dustbin?

So the evening of 15May19 found me checking into a cheap motel in Goodlettsville, north of Nashville, with big plans to find Isaac Lea’s type locality on the morrow.  The “Dr. Currey” referred to by Lea must have been Dr. Richard Owen Currey (1816 – 1865), the prominent Nashville physician impeccably credentialed with a Presbyterian heritage and University of Pennsylvania degree.  So, my plan was to survey the rivers and streams of southern and eastern Robertson County first, closest to Nashville, then expand my search area north and west as necessary.

The morning of 16May19 dawned crisp and clear.  And I enjoyed lovely field conditions surveying the pretty little springs and streams of southern Robertson County, taking three good swings, striking out.  So I headed west, and on my second at-bat, made solid contact in Springfield, the county seat (M, above).   I found three species of pleurocerids inhabiting Sulfur Fork at the US 431 bridge in Springfield, although none common: P. laqueata, P. troostiana, and (sure enough) P. simplex of triangular, heavily-shelled ebenum morphology [11].  Could this be Isaac Lea’s type locality?  If so, the subspecies hypothesis would seem justified.

The only misgivings I continued to harbor about the population at Springfield, however, were that the animals, in both shell and body, were pale brown, with white apertures, as (I have always assumed) typical for ebenum.  They were not the “very dark-colour” specified by Lea, nor did they sport “purplish” apertures nor “convex” whorls.  And Springfield is 30 miles north of Nashville.  Is that too far afield in 1841? 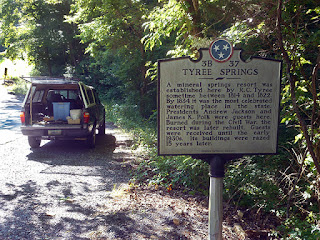 In any case, I turned my pickup back toward Nashville, with other field objectives now rising higher on my agenda.  And my route happened to take me south down TN 258, by an historic marker for Tyree Springs.  And there, at Site N, I stumbled upon a very attractive nominee for the type locality of Melania ebenum.

All I know about the history of the place you can read for yourself on the sign (click for larger).  There doesn’t seem to be any evidence of a resort at the site today – just second-growth forest and the little stream that runs under the road at far left in the photo above.  And the rocks of that little stream are covered with pleurocerids bearing thick, black shells, with obtuse spires, small sutures, whorls somewhat convex, and apertures rather large, ovate, and within purplish [12].  In other words, absolutely typical P. simplex.  If Tyree Springs is (indeed) the type locality of Lea’s ebenum, the simple-synonym hypothesis must prevail.

Tyree Springs is a comfortable day trip via horse-and-buggy from Nashville.  It is easy to imagine that a prominent physician such as Dr. Currey would be familiar with such a place in 1841.  There is just one problem.  Tyree Springs are not located in “Robinson” County nor even in Robertson County.  The springs are located in Sumner County.  The Robertson County line is another couple miles north up the ridge.
Tyree Springs drain south, through Drakes Creek into the Cumberland River above Nashville.  So more out of intellectual curiosity than anything else, I drove downstream to sample Drakes Creek at the little town of Shackle Island [13], marked O on the map above.  And there I found a sparse population of pleurocerids bearing the paler, heavier shells with flat whorls and white apertures I have always considered typical of the ebenum form.  The Drakes Creek population of P. simplex, from headwaters to mouth, demonstrates a textbook case of cryptic phenotypic plasticity.

As I pointed my pickup back toward home on the evening of 16May19, I admit to a bit of frustration.  I wasn’t any closer to answering my questions about Pleurocera ebenum than I had been at the dawn of that long, lovely day.  In fact, the picture was murkier.

And then it occurred to me that the taxonomic situation mirrored rather beautifully the biological situation.  The taxonomic validity of Lea’s (1841) nomen ebenum is precisely as clear as the morphological distinction of those pleurocerid populations to which the name has subsequently been applied.

In the end, I resolved to follow the rule of Sunday afternoon.  The subspecies hypothesis as forwarded to us by Tryon, Goodrich/Burch, and Branson is the call on the field.  Against which there is not enough evidence to overturn.

[1] Actually, the Pleurocera population at the Falls of the Cumberland is a mixture of P. ebenum and P. semicarinata.  And the two species are difficult to distinguish here.

[2]  The great majority of the figures in Burch [3] are obviously from the pen of Mr. John Tottenham, an accomplished scientific illustrator specifically engaged for the project.  But one of the mysteries of Burch’s work is why many of his pleurocerid figures, in particular, were borrowed from elsewhere.  Burch reproduced his figure of “Elimia” ebenum from Tryon’s (1865-66) Monograph of the Family Strepomatidae.

[3] This is a difficult work to cite.  J. B. Burch's North American Freshwater Snails was published in three different ways.  It was initially commissioned as an identification manual by the US EPA and published by the agency in 1982.  It was also serially published in the journal Walkerana (1980, 1982, 1988) and finally as stand-alone volume in 1989 (Malacological Publications, Hamburg, MI).

[7]  I would be most gratified if you purchased my FWGNA Volume III (Prosobranchs) [html] and read pp 77 – 91.  Or you might certainly take the easy route by clicking:
[8] Goodrich, C. (1934) Studies of the gastropod family Pleuroceridae - I. Occasional Papers of the Museum of Zoology, University of Michigan 286:1 - 17. For more, see:
[9] Isaac Lea published his brief, Latinate description of Melania ebenum in 1841: “New Fresh Water and Land Shells,” Proceedings of the American Philosophical Society 2: 11 – 15.  That paper he followed with a larger paper, offering more complete English descriptions, in 1843: “Description of New Fresh Water and Land Shells” Transactions of the American Philosophical Society 8: 163 – 250.

[10] Isaac Lea originally described ebenum in the genus Melania.  He created his genus Goniobasis in 1862, formally transferring ebenum and scores of additional pleurocerid species into it.  I subsumed Goniobasis under Pleurocera in 2011.  For more, see:
[11] Perceptive readers might note that in Springfield, a pale, robust, heavily-shelled population of the ebenum form seems to inhabit a mid-sized stream without a corresponding dark, lightly-shelled simplex population upstream.  Maybe there is, or was, and I missed it?  Or maybe the Springfield ebenum population has colonized Sulfur Fork from below?

[12]  In the interest of full disclosure, it looks to me as though at least 85% of the pleurocerid population at Tyree Springs are smallish, dark Pleurocera laqueata, and another 10% or so are smallish, dark P. troostiana.  And the apical sculpture on the shells of those two populations is not strong, in many cases.  And even I had a hard time distinguishing the Tyree simplex from the laqueata.  But I refuse to entertain the possibility that Lea’s ebenum might be a junior synonym of Say’s (1829) laqueata or anything else.  Not gonna do it.  Wouldn’t be prudent.

[13] To be only slightly more precise.  My site (O) was located in Drakes Creek at the perfectly-manicured campus of the most grotesque megachurch I have ever seen.  I counted a staff of 18 sweetly-smiling pastors and 3 directors on their website, not counting the office support, building and grounds staff, rock musicians and stagehands.