Mitochondrial Superheterogeneity: What we know

Editor’s Note – This essay was subsequently published as: Dillon, R.T., Jr. (2019c) Mitochondrial superheterogeneity: What we know. Pp 145 - 153 in The Freshwater Gastropods of North America Volume 3, Essays on the Prosobranchs.  FWGNA Press, Charleston.

Finally some decent sample sizes, thank heaven!  I remember thinking this to myself when the abstract of the recent paper in Zoologica Scripta by Nathan Whelan and Ellen Strong fell upon my eyes in January [1].  Perhaps now, after twenty years of bouncing around on the fringes of evolutionary science, the phenomenon we here define as “mitochondrial superheterogeneity” will finally attract the attention it so richly deserves.

A population can be said to demonstrate “mitochondrial superheterogeneity” when two or more of its members demonstrate 10% sequence divergence or greater for any single-copy mtDNA gene, not sex-linked.  The phenomenon was first documented (as far as I am aware) in 1996 by Thomaz, Guiller and Clarke in European populations of the land snail, Cepaea nemoralis [2].  It has now been reported at least three additional times in land snails [2], twice in populations of freshwater pulmonates [3], once in oriental pomatiopsids [4], three times in Old World cerithiaceans [5] and six times in populations of North American pleurocerids [6, 7].  But the new study by Whelan & Strong is by far the most thorough.

W&S sampled 20 individuals from each of 12 populations of pleurocerid snails collected from North Alabama, sequencing three genes from all 240 individuals [8]: (mitochondrial) COI, (mitochondrial) 16S rRNA, and (nuclear) histone H3.  Six of the populations sampled were of Leptoxis (identified as praerosa in Tennessee drainages or ampla in Alabama drainages) and six of the populations were of Pleurocera (identified as pyrenella in Tennessee drainages or prasinata in Alabama drainages).  The specific identities of these populations are a complicated question, which we will defer to a later essay.  But here are the important findings: 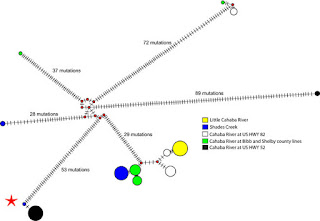 
For example, the COI results obtained by W&S from five of their Leptoxis populations are depicted above.  The 19 snails [8] sequenced from the Shades Creek population (shown in dark blue) had three strikingly different haplotypes: N=16 in the modal category, N=2 about 68 mutational steps (9%) different from the modal, and N=1 about 88 steps (12%) different.  Notice that the red intermediate points in the figure below are mostly quite distant from the branch tips and entirely hypothetical.

(2)  Peculiar patterns of interpopulation haplotype sharing.  Let us focus on that single Shades Creek snail demonstrating a 12% COI sequence divergence from its N = 16 associates, marked with a red star in the figure above.  That CO1 sequence (KT163940) is only 1% different from the sequence demonstrated by N=17 of the 20 snails sampled from the Cahaba River at the US52 bridge, 5 km downstream and then back up the main river about 20 km (e.g., KT164013).

Such results were first reported in 2004 by Dillon & Frankis [5], working with Pleurocera proxima in southern Virginia [10].  Our 2004 mtDNA sample sizes were very small – just three individuals from three P. proxima populations, plus single individuals of P. catenaria dislocata and P. semicarinata.  But we did sequence both the COI and 16S genes, giving us a total of 11 sequences for each gene.  All three of our P. proxima from Naked Creek matched in both sequences, and all three of our P. proxima from Cripple Creek matched in both sequences.  But the individuals we sampled from Nicholas Creek demonstrated superheterogeneity: the CO1 sequence of the (N=2) mode and the (N=1) minority differing by 16.9%.  And that same N=1 minority snail also differed from the (N=2) modal 16S sequence in Nicholas Creek by 14.1%.

(4)  No evidence of cryptic speciation.  Although the sample sizes of mtDNA sequence data in all three of my previously-published works on this subject have been quite small, all three have focused on pleurocerid populations for which I have tested Hardy-Weinberg equilibrium at multiple polymorphic allozyme loci with sample sizes of at least N = 30, and often much larger.  These are not weak tests, and if cryptic species had been present, I have reason to think that I would have found them [11].  But I have found no evidence of non-random mating in any population from which I have reported mitochondrial superheterogeneity [12].

Whelan & Strong have reinforced this result with some classical (i.e., entirely qualitative) studies of shell and radular morphology, pallial oviduct anatomy, and head-foot coloration in their 12 pleurocerid populations from North Alabama.  Their morphological observations are nicely illustrated and described in quaint, Victorian style (e.g., “Outermost denticle on each side delicate, flimsy, variable in position”).  Although W&S do note some intrapopulation variation in some morphological traits, none seemed to correspond with mtDNA clade.

(5) No evidence of NUMTs.  In some circumstances mitochondrial genomes or portions of genomes have been discovered transposed into the nucleus, yielding “NUclear MiTochodrial DNA” which, being “free to evolve,” can diverge greatly from the bona fide mtDNA genome.  W&S used a next-generation technique to sequence the entire mitochondrial genome of a Leptoxis individual from which they had obtained highly-divergent COI and 16S sequences with their standard (Sanger) methods.  The next-generation sequences matched the Sanger sequences, counter to the NUMT hypothesis.

(6)  No evidence of DUI.  Doubly-uniparental inheritance is the surprising situation where two highly-divergent mtDNA genomes have evolved within a single species, one transmitted through eggs and the other transmitted through sperm.  The phenomenon has been documented in a great variety of bivalve groups, including the freshwater unionids, but is unknown in gastropods.  And indeed, W&S could find no systematic differences in the mtDNA genomes isolated from the male and female samples of pleurocerids they analyzed.

So that’s what we know about mitochondrial superheterogeneity as of March 2016, and what doesn’t cause it.  But what, then, might a reasonable explanation be?  Are data such as these rudely yelling something important to us, in some language we do not understand?  Tune in next time!

[3] My good friend and colleague Amy Wethington documented a striking case of mitochondrial superheterogeneity (both COI and 16S) in a Charleston population of Physa acuta in 2003.  We never could get a separate paper through the reviewers, but the data were published in her (2004) dissertation.  Andrea Walther and colleagues had better luck with the reviewers in her (2006) paper on Laevapex fuscus.  For more, see:
[4] Wilke, T. et al. (2006)  Extreme mitochondrial sequence diversity in the intermediate schistosomiasis host Oncomelania hupensis robertsoni: another case of ancestral polymorphism?  Malacologia 48: 143-157.

I reviewed the Dillon & Robinson (2009) results in my blog post of March, 2009.  See:
[7] The note of Dillon & Robinson (2016) is a special case.  John Robinson and I first reported mitochondrial superheterogeneity in East Tennessee populations of Pleurocera clavaeformis and P. simplex in an oral presentation at the 2011 meeting of the American Malacological Society in Pittsburgh.  We uploaded our COI sequences to GenBank shortly thereafter, and drafted a manuscript entitled, “When cometh our reformation?  Molecular typology meets population genetics in the pleurocerid gastropod fauna of east Tennessee,” which we were ultimately unable to publish.  Our 2011 results have just this month become available as a note in Ellipsaria:

Dillon, R. T. Jr, and J. D. Robinson (2016)  The hazards of DNA barcoding, as illustrated by the pleurocerid gastropods of East Tennessee.  Ellipsaria 18: 22-24. [PDF]
More about this little work in a future post.

[10] In the first paragraph of their discussion, our good friends Nathan Whelan and Ellen Strong wrote, “We show for the first time in pleurocerids that there is complete congruence in phylogenetic signal between the COI and 16S mitochondrial genes.” They have completely neglected to cite the Dillon & Frankis (2004) paper, either here or anywhere else in their work, even though Dillon & Frankis was heavily-cited by Dillon & Robinson (2009), of which they obviously were aware.  I am sure this was just a simple oversight.

[11] In fact, we did find a cryptic species in the same (2011) allozyme survey that forms the basis of the recent note by Dillon & Robinson [7].  Put another bookmark here – we’ll come back to this later, as well.

[12] The primary reason it has continued to be so difficult (in our experience) to publish reports of mitochondrial superheterogeneity is the immediate (and passionate) objection of reviewers that we have overlooked cryptic species, despite our very good allozyme evidence to the contrary.  That climate now seems to be improving.

Posted by Rob Dillon at 4:41 PM No comments: