Freshwater snails have suffered a spate of bad press in the upper Midwest recently. Late last week our friend Henry Fieldseth sent us an article from the Minneapolis Star Tribune (6Nov07, pasted below) attributing the death of thousands of waterfowl in a local lake to infections by trematode worms, with the "banded mystery snail" (Viviparus georgianus) indicted as a co-conspirator. This is not the first mass murder rap to be pinned on a digenean trematode or an invasive gastropod henchman, nor will it be the last, I fear.

Massive late-summer mortalities of waterfowl attributable to trematodiasis have been reported at least since the 1960s, when thousands of ducks were apparently killed by mixed infections of the digeneans Cyathocotyle bushiensis and Sphaeridiotrema globulus in the St. Lawrence River south of Quebec. Hoeve & Scott (1) linked these deaths to ingestion by the ducks of the invasive European gastropod Bithynia tentaculata. In 1997, tens of thousands of coots were killed in Wisconsin's Shawano Lake by a third digenean worm, the European Leyogonimus polyoon, again carried by Bithynia (2). And since 2002, all three worms have been implicated in massive waterfowl mortalities around Lake Onalaska, a backwater of the upper Mississippi River near La Crosse (3). All three of these digenean trematodes, the introduced Leyogonimus as well as the natives.
.
Cyathocotyle and Sphaeridiotrema, display Type III life cycles – entering their ultimate (vertebrate) host by ingestion of an infected meal (4). The vertebrate host sheds eggs through 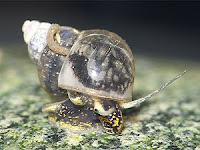 Trematodes do not typically kill their definitive hosts. The massive mortalities we have seen scattered through diverse waterfowl populations in the upper Midwest are most likely attributable to unusually high rates of snail ingestion as well as to double or exotic infections. So since the ducks (with their digenean parasites) disperse readily on continent-level scales, federal and state agencies have signaled their intent to focus their efforts to control the trematodiasis by controlling the snails (5).

Thus last week's discovery of the massive waterfowl mortality attributable to Cyathocotyle and Sphaeridiotrema in Minnesota's Lake Winnibigoshish is especially bad news. For if the initial reports hold up, here the first intermediate host of the worm is not Bithynia, but rather Viviparus georgianus (6). Viviparus georgianus is a native of the American southeast, and is much more widely distributed throughout the United States than Bithynia. And if the problem trematodes can infect Viviparus, they would also seem likely to be able to exploit Bellamya (Cipangopaludina) and Campeloma, and in so doing expand their potential ranges nationwide.

I am often asked about the potentially negative effects of artificially-introduced freshwater gastropod populations. My usual response has been that such effects are difficult to establish. Very few studies have ever demonstrated community or ecosystem effects attributable to exotic freshwater gastropods – they seem to invade environments that are already disturbed and compete rarely (if ever) with native populations.

But here splashed across our morning newspapers we read that "carcasses dropped by eagles hung in the trees on the island, and feathers littered the shore" (LaCrosse Tribune 28Oct07, link removed). This is a dramatic example of unfortunate environmental consequences directly attributable to the spread of exotic freshwater gastropods. And at this point I don't think that snail control will solve the problem. And I really wish I could think of any other alternative.

(4) See my Chapter 6 of Dillon (2000) for a more complete review of trematode life cycles, from the standpoint of the gastropod. Although most of that chapter (perhaps unsurprisingly) focuses on Type I Fasciola and Type II Schistosoma, there is a bit about Type III Echinostoma as well.

Nov. 6: Parasite has killed thousands of scaup
The deadly organism has infected snails at Lake Winnibigoshish and has been picked up by the ducks, who dive below water to feed. The DNR is concerned the parasite might spread to other lakes.
By Doug Smith, Star Tribune
Last update: November 08, 2007 – 4:49 PM

A parasite has killed thousands of ducks on Lake Winnibigoshish in northern Minnesota, and could kill many more before the fall migration is over."We picked up 1,000 dead scaup [also known as bluebills] on Saturday," said Steve Cordts, Minnesota Department of Natural Resources waterfowl specialist.

He saw many other scaup still alive but unable to fly, or to fly far. "You could boat right up to them," Cordts said. Perhaps 3,000 ducks, mostly scaup, and some coots have died in the past week. "I'm sure there's more dead birds," Cordts said Tuesday.The ducks apparently are dying from trematodes, a tiny 1-millimeter intestinal parasite or fluke that has infected snails in the lake. Scaup -- a duck that dives below water to feed -- eat the snails, then are infected. "They essentially bleed to death," Cordts said.

The parasite was confirmed in scaup and coots sent to the National Wildlife Health Center in Madison, Wis. Similar die-offs caused by trematodes have occurred spring and fall since 2002 on the Mississippi River near La Crosse, Wis., killing about 40,000 ducks and coots since then. Die-offs again are occurring there this fall.

Cordts said he's not sure how the trematodes made it to Winnie. They apparently have infected a snail called the banded mystery snail, which was first found on Winnie about eight years ago. They are infecting the faucet snail on the Mississippi.

Officials aren't sure how many ducks might eventually die on Winnie, or what impact, if any, it will have on the scaup population. But Cordts is concerned that the snails and parasites might spread to other Minnesota waters. Other duck species also could eat the snails and become infected, he said.

There is concern because the continental scaup population has been declining since 1984 and hit an all-time low last year at about 3 million. Hunters annually kill about 300,000. Minnesota hunters killed about 20,000 last year. Lake Winnibigoshish is a major scaup resting area during migration. "We could have 20,000 scaup show up on Winnie right now," Cordts said. "If that happens, they'd pretty much all be at risk."

Cordts plans to check the lake again today, but he won't collect any more dead ducks. Instead, carcasses will be left to decompose or be eaten by scavengers. The parasite apparently is not a threat to other species, including humans, but Cordts said hunters shouldn't eat sick waterfowl.