Editor's Note. Word has reached us of the death of Dr. George Ang Te, who passed away late last year in New Hamburg, NY at the age of 67 [1].  This is the second installment of a three-part series written to place his 1970s-era contributions to our understanding of the North American Physidae into perspective.  It was subsequently published as Dillon, R.T., Jr. (2019b) To identify a Physa, 1975.  Pp 173-180 in Freshwater Gastropods of North America Volume 2, Essays on the Pulmonates.  FWGNA Press, Charleston.

Those of you who bore with me through my (admittedly rather personal) essay last month [2] will not be surprised to learn that between the fall of 1973 and the spring of 1977, I spent most of my spare time loitering about the periodicals-currently-received section of the Virginia Tech library, waiting for the new issues of Nautilus, Malacologia, and Malacological Review to hit the news stands.  And when my eager eyes first drank in that (really rather beautiful) 1975 paper by a graduate student up in Ann Arbor named George A. Te [3], I knew I had found the man who could, at long last, scratch my Physa itch.

Looking back with the benefit of 40 years’ perspective, George Te’s “Michigan Physidae” may have represented the zenith of classical malacology in North America – impressively rigorous in its systematics, pristinely innocent of genetics.  His input data were 3,888 museum shell lots and 252 alcohol lots, cataloged under 34 specific or subspecific nomina.  He analyzed each shell lot subjectively but critically, developing an elaborate scoring system of about 30 characters, for example shell shape = elongate-slender, elliptical-subcylindrical, ovate-globose, and so forth.  A single individual from each alcohol lot was dissected to reveal the penial complex [4], which was scored by four additional characters.  His output data were a (much shorter!) list of 6 species and 8 subspecies confirmed from the waters of the state of Michigan, 7 nomina lowered into synonymy, and 13 nomina subtracted by correction of range or identification.

Among the strengths of Te’s 1975 work were his excellent historical review of the taxonomy of the Physidae [5], his extensive tabulations of the shell and penial character states for the 14 taxa he considered valid elements of the Michigan fauna, a plate of small (but serviceable) shell photos, and a (remarkably ambitious) dichotomous key to the shell morphology.  Perhaps his most significant contribution was a formal taxonomy for physid penial morphology, which still remains useful today [below, note 6]. 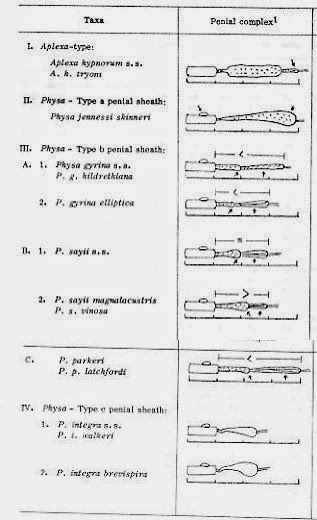 Those same 40 years of hindsight also make it easy to find fault with George Te’s paper on a number of grounds, however.  He studied “museum lots,” not populations.  There is (almost) no evidence that Te recorded any observations on the living creatures themselves, or indeed that he conducted any fieldwork whatsoever [7].  And Te’s species concept was rigidly typological, betraying no hint that he understood the concept of variance, either within populations or between them.  So (for example) the shell length for 623 museum lots of Physa integra was given as 12.7 mm.

The worst consequence of Te’s typological species concept – which would ultimately render his 1978 dissertation virtually useless – seems to have been that he did not feel it necessary to provide locality data (or equivalently, catalog number) for any specimen he ever examined [8].  I understand that if all 623 of his lots of Physa integra did indeed bear elongate-ovate shells 12.7 mm in standard length, it will not matter where any particular individual specimen of P. integra was collected.  But they didn't, and it does.  A lot.

Nevertheless, against the background of the medieval ignorance that prevailed regarding the North American Physidae prior to 1975, George Te’s Michigan paper was a tremendous advance.  Physids are the most widespread freshwater gastropod in the waters of eastern North America.  And all across this great country of ours, the environmental movement was dawning.  The National Environmental Policy Act was passed in 1970, the Clean Water Act in 1972 [9], and the Endangered Species Act in 1973.  Agencies and industries were suddenly being held accountable for environmental “impacts” of all sorts, but a secondary trade had not as yet arisen to meet the demand for environmental support and consultation.  So contracts for environmental work flooded into the universities, which were the only place where any technical expertise in addressing such questions resided.  Expertise that included, I suppose, that of a 20-year-old undergraduate biology major at Virginia Tech.

Meanwhile, back in southern Virginia, ten years of controversy had already swirled around Appalachian Power Company’s “Blue Ridge Project,” a double-dam, pumped-storage facility on the New River straddling the North Carolina line [10].  So in 1975, the Virginia Tech Center for Environmental Studies issued me a pair of boots, a pair of buckets, a kick-net and a pickup truck [11].  And off I went up the New River Valley, sampling 89 sites and ultimately identifying 6 unionid species, 4 pisidiid species, and (approximately) 10 species of freshwater snails.

By this stage of my young career I was familiar with Baker’s (1911) lymnaeid monograph [12] and his (1945) planorbid plates [13], as well as Basch’s excellent (1963) work on the ancylid limpets [14].  And now, just when I needed him the most, a promising young graduate student in Ann Arbor threw me a lifeline on the Physidae.

I first wrote George Te in March of 1976, inquiring whether he might be willing to examine my samples of physids from southern Virginia.  His reply was prompt, courteous, and affirmative.  And over the next five months, we exchanged a pleasant correspondence focusing primarily on the New River Physa, which he found most interesting.  He recognized two species – Physa hendersoni widespread throughout the upper (soft water) mainstem and tributaries, and Physa pomilia in scattered hard water sites downstream.  George Te considered the occurrence of P. hendersoni in the upper New River especially interesting, as “little is known about (its) range beyond its type locality in South Carolina.”  I accepted his identifications as gospel, of course, transferring both to my (1977) undergraduate honors thesis [15], and to the (1982) paper I published in Freshwater Biology with my adviser, E. F. Benfield [16].

In retrospect, I cannot imagine how George Te’s identifications of my New River Physa samples could have been more wrong.  The physid populations widespread in soft waters upstream are P. acuta, and the scattered hard water populations downstream are P. gyrina.  Physa hendersoni is a junior synonym of P. pomilia [17], and is entirely absent from the New River drainage, under all aliases, as far as is known today.

But science is not about being correct, it is about being testable.  And George Te’s 1975 Michigan paper, even without genetics, field observations, or indeed locality data, was the first scientific treatment of the North American Physidae since the dawn of the modern synthesis.  The photos, dichotomous key, and tabulations of character states it contained were sufficient to allow Amy Wethington and myself to return to Michigan in 2003 and re-identify multiple biological populations of the typological species Te recognized in 1975.  These we used to calibrate the genetic tools and breeding studies we were developing to conduct a fresh review of the family.   No, there are not six valid biological species of physids in Michigan [18].  But that is not important.

And George Te’s research contributions were by no means complete with his 1975 paper.  His higher-level taxonomy was still very traditional in 1975, all Michigan species referred to the large, inclusive genus Physa favored by Bryant Walker [19] and earlier workers, except the oddball Aplexa hypnorum.  Where did that unfortunate generic nomen “Physella” come from?  Tune in next time!

[4] Te’s (1975) paper did not include data on any aspect of the anatomy other than penial complex.  But he added (promisingly) that the types of penial sheaths “correlate with observations on differences in the renal complex, mantle digitations, mantle border, radula, and other anatomical structures (Te, unpubl).”

[5] Te’s thorough review of the decades of abject confusion surrounding the nomen “Physella” should be required reading for any taxonomist who has ever considered subdividing the Physidae.

[6]  The image with this month's post depicts Te’s 1975 diagrams of the four penial complex types: Aplexa-type, Type-a, Type-b, and Type-c.  The differences that Te perceived among the various "subtypes" are not significant.

[7] Well, that’s a bit unfair.  Te mentioned that he made “direct field collections” (locality unspecified) in his discussion of penial morphology, and thanked P. T. Clampitt “for helping me collect P. parkeri and P. integra at Douglas Lake” in his acknowledgements.  But any field observations he may have made apparently had zero influence on his 1975 paper.  In Table 4, for example, we read that the habitat preference of 171 “museum lots” of Aplexa hypnorum was “woods pool,” and the habitat preference of 343 museum lots of P. gyrina was “pools and ditches,” and so forth.

[10] APCO’s Blue Ridge Project was ultimately stopped in late 1976, when a 26.5 mile section of the New River in North Carolina was added to the National Wild and Scenic Rivers system.  Here’s an excellent thesis reviewing the controversy:
[11] Those were the glory days!  The peg board behind the desk at John Cairns’ Center For Environmental Studies must have held keys to at least 20 vehicles.  And even undergraduates could check one out, with a state gas card in the glove compartment.  But my adviser  Fred Benfield, said this: “If you wreck that truck, Boy, just keep going.  Never come back.”

[19]  Walker, B. (1918) A Synopsis of the Classification of the Freshwater Mollusca of North America, North of Mexico. Misc. Pubs., no. 6. Ann Arbor: University of Michigan Press.
Posted by Rob Dillon at 9:50 AM 1 comment: