This past December brought the publication of a brief paper by our colleagues Christopher Rogers and Amy Wethington synonymizing the federally listed “Snake River Physa” (Physa natricina) under the cosmopolitan P. acuta (1). How a local population of an invasive pest came to be protected under the Endangered Species Act is but one blunder in the sad history of fumbles and missteps that has characterized the record of American Malacology in the Snake River Canyon of southern Idaho. Can anything be learned to prevent such embarrassments in the future?

The misadventure began in the early 1980s, when Idaho Power Company proposed the construction of six new hydroelectric projects on the middle Snake River, perhaps to impound the last free-flowing reaches of a 122 mile section already tightly controlled by 11 dams. Environmental groups rose up in opposition (2), and I would freely confess sympathy for their cause. I have a visceral love of rivers and the lotic biota, and hate impoundments because they are ugly, stinking blights, all too rapidly infested with Bud-swilling bass fishermen.

But insults to the public aesthetic will never be as compelling to the permitting agencies as hydropower, irrigation, and jobs, no matter how egregious the choice of beer. Thus it is not a coincidence that within ten years of the announcements by Idaho Power, five species of endangered freshwater gastropods were discovered in the middle Snake River. Pyrgulopsis idahoensis, Valvata utahensis, Taylorconcha serpenticola, Physa natricina, and the undescribed "Banbury Springs lanx" were added to the federal list of endangered and threatened wildlife on December 14, 1992 (3). The Idaho Power hydro projects were shelved.

About "Pyrgulopsis idahoensis" we have written much in recent years (4). Although originally believed endemic to the Snake River, it proved to be a junior synonym of P. robusta, its actual range extending over four states. Far from being endangered, the Snake River population of P. robusta may be the largest single population of freshwater gastropods on earth. Taylorconcha and V. utahensis are also not rare, and are currently being studied for delisting as well (5). And now published is the paper by Rogers & Wethington sinking Physa natricina.

Physa natricina was described in 1988 by Dwight Taylor, a reclusive millionaire whose 44-page obituary will appear in the next Malacologia (6). Although perhaps better qualified as a paleontologist, Taylor often published on the modern terrestrial and freshwater malacofauna of the American West. He is best remembered for his fanciful treatments of the Physidae (7) and the Cuatro Cienegas hydrobiids (8), imagining more higher taxa than valid biological species actually exist to sort into them.

To be fair, Taylor’s 1988 work (9) conformed to the same 19th century standards of practice under which most elements of America's molluscan fauna have been described. He did distinguish his Physa natricina from P. gyrina, a strikingly different animal which is very common in the Snake River. But the brief comparison he offered between his new species and P. integra, the synonym for P. acuta most commonly applied in the upper Midwest, should have raised a red flag. Taylor wrote that the penial sac of P. integra "is more slender, with a kink near its distal end, and is not bent near the middle." Kinks and bends in mollusk anatomy? Was Taylor nuts? (10) One need not be a malacologist - one need only to have eaten an oyster - to realize that anybody who would distinguish the internal anatomy of a gastropod by reference to kinks and bends is simply unqualified for his profession.

Taylor's work was generally characterized by false precision. For example, in his introductory description of the (entire!) subgenus Physa, he stated that the "spawn capsule...is up to about 10 mm long with 20 eggs." But even under controlled conditions here in my laboratory, we commonly record individual Physa egg masses ranging from over 100 embryos to fewer than 1. Meanwhile, about truly important matters Taylor seems to have been careless at best. His statement that the natricina holotype was deposited in the Los Angeles County Museum ("LACM 2256") seems to have been a fabrication. Christopher Rogers was finally able to track down Taylor's P. natricina holotype at the California Academy of Sciences, where it was not deposited until 1999.

And here's another red flag - the hypothesized rarity of the new species. Taylor's original description was based on but two live-collected animals, "despite arduous effort" to obtain more. But species do not exist as individuals - they exist in populations. Any generally-trained biologist might well wonder how a population as sparse as P. natricina seems to have been for over 20 years could remain viable.
. 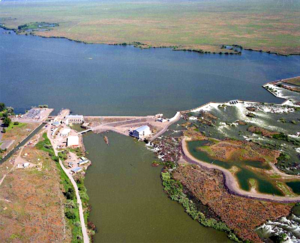 In late 2005 I was pleased to accept an invitation from the Bureau of Reclamation to visit the Minidoka Dam (photo above) on the Snake River east of Rupert, Idaho, for a Physa strategy meeting. Also present were our colleagues Amy Wethington, John Keebaugh, Steve Lysne, and several others. The product of that meeting was a consensus that a sequencing project should be undertaken as soon as the next fresh P. natricina individual might be recovered from the river – a day which never arrived (11). But on the basis of what I was able to learn about that elaborately managed river system, together with my own limited observations of the environment and my general experience with the biology of physids, I offer the following hypothesis (12).

I suggest that the two individual P. acuta from which Taylor described his “Physa natricina” in 1988 may have been flushed into the main Snake River from irrigation ditches. In addition to power generation, many of the Snake River dams serve to divert irrigation water to the surrounding farm land. This is done seasonally, and both the peak diversions and the peak release flows back to the river can be high. I suggest that irrigation waters may sporadically carry elements of the canal-dwelling macrobenthos into the Snake River, including occasional individual Physa acuta.

Science is a self-correcting process. It is gratifying to see two of our own, Rogers and Wethington, designing the research program and publishing the paper that has turned us back from our 20-year blunder. But at such a cost! Literally millions of dollars have been wasted monitoring, managing, and protecting a snail that anyone on six continents could find in the ditch behind his local McDonalds, licking special sauce off the hamburger wrappers. Can we avoid even the first step down such paths in the future?

Yes, if we watch for red flags. And the biggest red flag waving over the Physa natricina blunder was not the vacuous description, the false precision, or the biological implausibility of the phantom snail's very existence. The biggest red flag was that this entire research program was motivated, from its very inception, by water resource politics.

You have heard me preach this sermon before - science and politics do not mix. When the two worldviews collide, compromises must be made, and it's always the science that suffers, in my experience. Malacology was corrupted at least four times by water resource politics in the middle Snake River 20 years ago. And science continues to be corrupted in our professional organizations, from the AAAS to the NAS, on matters ranging from global climate to stem cells. But when we see that red flag fly, we must stop.

(11) See the Bureau of Reclamation's web site for the "Physa Amendment" to its "2004 Biological Assessment and Opinions for Operations and Maintenance of Reclamation Projects in the Snake River Basin above Brownlee Reservoir." There's also an (8/05) "Implementation Plan for Proposed Snake River Physa Surveys" available toward the bottom of the page.

(12) I don’t remember who first advanced this hypothesis – it was very likely in existence long before my introduction to the matter. And I’m pretty sure I’m not the only one who holds it, but I wouldn't presume to speak for anybody else.
Posted by Rob Dillon at 1:59 PM No comments: