I am once again indebted to Dr. Julian Harrison for calling my attention to a previously unconfirmed element of the South Carolina gastropod fauna, the little planorbid Promenetus exacuous. This brings the list of South Carolina freshwater gastropods up to 28 taxa.

Julian has collected Promenetus from lentic environments in two areas of the South Carolina coastal plain, one near Drayton Hall Plantation on the current outskirts of Charleston, the other by the Edisto River about 90 km inland. But the meat of the species’ range is much further north - generally above the glacial maximum. Promenetus does occur in coastal regions of North Carolina, increasingly scattered as one proceeds south. See the map below. 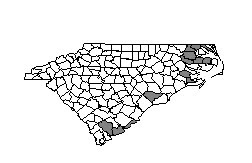 Julian Harrison also gets the credit for discovery of the limpet Hebetancylus excentricus in South Carolina. The distribution of Hebetancylus here is similar to that of Promenetus - it occurs in a few scattered coastal plain ponds. But Hebetancylus is a more southern species, the meat of its North American range extending from Florida to Texas. See map below.
. 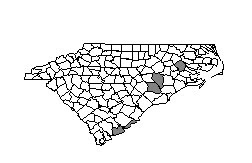 The common factor in the occurrence of both Promenetus and Hebetancylus in South Carolina, other than that both were called to my attention by Julian Harrison, is that both occur in habitats frequented by migratory waterfowl. Charleston and the Carolina lowcountry lie directly beneath the Atlantic flyway, visited twice annually by millions of ducks, geese, and other migratory water birds. (An interesting radiotelemetric study has been published by the Atlantic Flyway Pintail Project.) All the ponds from which Promenetus and Hebetancylus have been collected here are certainly visited. In fact, the pond from which Hebetancylus was first reported is an ornithological research site. Both gastropods are small and clingy. Although the evidence is circumstantial, I think that Promenetus and Hebetancylus may owe their existence in South Carolina to dispersal through the air.

Broadening our discussion a bit, the distributions of Planorbula armigera and Valvata bicarinata in North Carolina look very similar to that of Promenetus in South Carolina - scattered coastal habitats associated with waterfowl. It is tempting also to attribute the single South Carolina population of Biomphalaria to aerial dispersal, although the import of aquatic vegetation may be a more likely explanation here.

To those interested in learning more about the aerial dispersal of mollusca, I would recommend the charming (1965) paper of W. J. Rees. Rees collected several anecdotes connecting freshwater gastropods to both birds and insects. The experiments of Malone (1965 a,b) and Boag (1986) are also interesting in this regard. References below.

In summary, one often sees the adjective “accidental” used in bird books to describe the occurrence of particular avian species outside their normal ranges. I would suggest that “accidental” might just as aptly be applied to certain occurrences of freshwater gastropods as well.


References
Posted by Rob Dillon at 3:39 PM No comments: