The fancy landscape at the office park near my home in Charleston features a narrow pond, perhaps three meters deep and over 100 meters long, with concrete lining and a natural earth 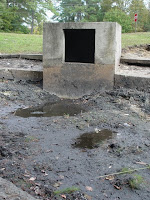 base. It is inhabited by our three local pulmonate weeds (Physa acuta, Helisoma trivolvis, and Lymnaea columella) as well as by mosquito fish, tadpoles, and a variety of macrophytes both submerged and emergent. This pond has long served as the water source for my laboratory cultures of pulmonates, and as such I have visited it approximately every two weeks for 6 - 8 years.

About a month ago the pond was drained for cleaning. A crew subsequently spent quite a few days shoveling leaves, mud, vegetation and organic debris from the basin, leaving a few shallow pools scattered on a clean mud bottom. The photo at left above shows the drying pond at its lowest end, with the concrete standpipe that ordinarily regulates water depth in the background. A high-resolution close up of one of the drying pools with Helisoma trivolvis (both the living and the dead) much in evidence, can be downloaded [here]. As the figure below illustrates, the individual Helisoma were exceptionally large.
. 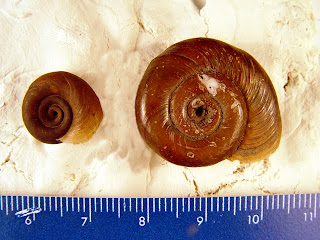 A similar phenomenon also seems to occur occasionally in the Physa acuta population inhabiting the main pond at Charles Towne Landing State Park. I have many years of casual observations on this population, which has served as my source of control snails for experiments on the reproductive biology of Physa since 1988. In culture, P. acuta from this population reach maturity at about 6 mm shell length (seven weeks post hatch), and have never grown larger than about 12 mm when reaching the end of their life at 12 - 13 months of age (Wethington & Dillon 1993, 1997). For years I never saw an individual larger than about 12 mm in the wild. But on a casual visit in March, 2001, I discovered that the population was comprised almost entirely of gigantic individuals, 15 - 20 mm in shell length (below). 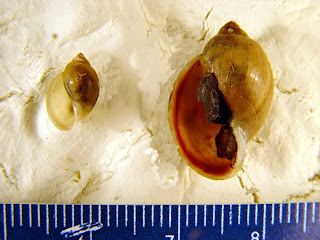 What might cause such sporadic cases of gigantism? Growth is indeterminate in all the basomatophoran pulmonates of which I am aware. But since growth rate slows dramatically at onset of reproduction, maximum size effectively becomes a function of size at maturity. Following Charnov and similarly minded evolutionary biologists from the 1980s and 1990s, I have suggested that size at maturation in pulmonates may be a function of survivorship schedule (Dillon 2000: 140 - 149).


In both my local Helisoma population and my local Physa population, gigantism appeared in the fall or winter and was not associated with parasitism. Both populations seemed stressed by low water, and probably severe temperatures. But neither population appeared to be starving, at least in the long term. And perhaps most strikingly, in neither population were eggs or juveniles in evidence. It is my hypothesis that gigantism in pulmonates may be prompted by some environmental perturbation postponing, perhaps even canceling, reproductive maturity.

Such a perturbation, although perhaps ongoing as gigantic individuals are observed, must have begun earlier in the season, when maturation would in an ordinary year have taken place. Its effect would be to improve survivorship above expected levels, perhaps through an unusual reduction in predation, parasitism, or disease. Did something kill the predators that ordinarily live in the ponds with my gigantic pulmonate populations without adversely affecting the snails themselves, triggering a growth spurt?

And do systematic malacologists have a history of being fooled by gigantism? About 300 km up the coast from where I write this essay is the home of Helisoma ("Planorbella") magnifica, a pulmonate of truly gigantic proportions (Figure below from plate 96 of Baker). Long feared extinct, a couple scattered populations of H. magnifica were re-discovered in 1988 near Wilmington, North Carolina, by Bill Adams and Andy Gerberich. The subsequent history of this species, tragic and comic by turns, is a tale best left for another day, and another teller. I know that a sample of H. magnifica was held in culture for a number of years, and that at least occasionally, magnifica adults bore offspring subsequently identified as H. trivolvis, with which magnifica co-occurs. The morphology of H. magnifica does not suggest simple gigantism of H. trivolvis, however, the magnifica shell being much more boxy and broad than the trivolvis shells shown above. The extent to which the shape of the pulmonate shell may be influenced by environmental cues is another topic upon which we might chew in the future. 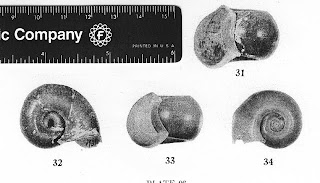 For what its worth, our colleague Art Bogan and his colleagues (2002) reported mtDNA sequence divergence in the 4 - 9% range between a sample of four H. magnifica and sample of 9 H. trivolvis collected in Union County, a couple hundred kilometers west of Wilmington. Given Art's observation that sequence divergence within conspecific Helisoma populations ranged over 3%, however, a comparison of magnifica to a trivolvis population with which it co-occurs would have been much more cogent. But regardless of the status and fate of H. magnifica, the existence of great phenotypic plasticity in shell morphology should remain foremost in the minds of all of us struggling with the taxonomy and classification of freshwater pulmonates.

References
Posted by Rob Dillon at 1:25 PM No comments: