Updated Maps for the FWGNA Project

We are excited to announce that a fresh set of pdf maps detailing the ranges of all the freshwater gastropod species inhabiting Atlantic drainages from Georgia to the New York line are now available for download from the FWGNA site.  This is the first significant update of FWGNA mapping coverage since ever.

As our legions of loyal users will fondly recall, the oldest sections of the FWGNA website featured downloadable pdf dot maps showing the detailed distributions of freshwater gastropods in South Carolina (2005), North Carolina (2005), Georgia (2006) and East Tennessee (2011).  But neither our Virginia site (2011) nor our Mid-Atlantic site (2013) ever featured pdf dot maps.  And our maps of Georgia and Carolina distributions have gone obsolete in the interim. 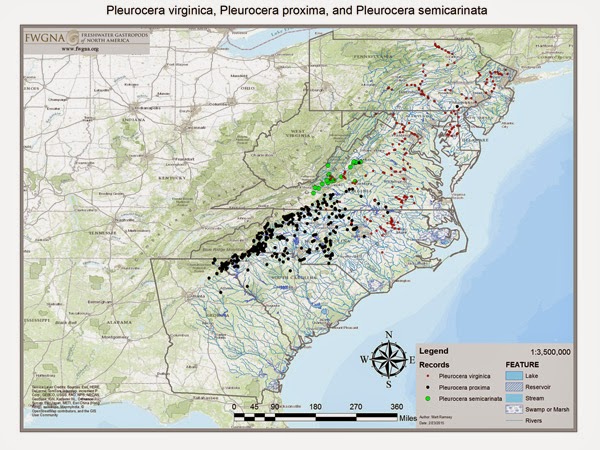 So the fresh set of range maps now available for download integrates seamlessly with the version of the FWGNA site we rolled out in October of 2013, based on 11,471 records of 68 freshwater gastropod species and subspecies inhabiting the Atlantic drainages of nine states [1].  These 68 taxa have been divided into 26 sets of two or three related species each (in most cases), and mapped in sets as a tool for the exploration of potentially interesting joint distribution patterns.

As an example, click on the thumbnail above to download a pdf map comparing the distributions of Pleurocera proxima, P. virginica, and P.semicarinata.  You will see very little overlap between these three widespread pleurocerids, proxima ranging throughout small softwater streams of the Blue Ridge and upper Piedmont from Georgia to Virginia, semicarinata inhabiting small hardwater streams in the Great Valley of Virginia, and virginica in the streams and rivers of the lower North Carolina Piedmont, spreading northward.

By way of contrast, click on the thumbnail below left to compare the ranges of the hydrobiids Littoridinops tenuipes, Notogillia sathon, and Spilochlamys turgida.  While populations of Littoridinops demonstrate specialization on a unique (freshwater tidal) habitat up the entire length of the Atlantic Coastal Plain, Notogillia and Spilochamys are positively associated, very strikingly tending to occur together in a narrow patch of central Georgia. A complete set of updated maps every bit as interesting as these are available today from the FWGNA site for the entire freshwater gastropod fauna of US Atlantic drainages.  Visit any of the 68 separate species and subspecies covered, scroll down to the “Supplementary Resources” heading, click on the “Atlantic drainages” link, and enjoy!

We are pleased to acknowledge a great debt of gratitude to Mr. Matt Ramsey, an undergraduate archaeology student here at the College of Charleston with a bright future ahead of him.  Great job, Matt!