I'm pleased to report that an illustrated Key to the Pleuroceridae of Virginia, recently developed by Brian Watson, Tim Stewart and myself, is now available on the FWGNA site. The resource includes notes on habitat, distribution, ecology, life history, taxonomy and systematics for all 12 pleurocerid species inhabiting the Commonwealth. It was made possible by a contract from the Virginia Division of Game and Inland Fisheries, and is part of our larger "Freshwater Gastropods of Virginia" project currently ongoing.

The focus of the VDGIF contract was on the diverse Goniobasis populations that inhabit the Tennessee River tributaries of southwest Virginia, a taxonomically difficult fauna about which some conservation concern has been raised. Our survey of the genetic divergence among 12 populations at 11 allozyme-encoding loci confirmed three species in the region - Goniobasis clavaeformis, G. simplex, and G. arachnoidea (1). We combined our fresh data on the Tennessee drainage pleurocerid fauna with previously-accumulated observations from the New River and Atlantic drainages to construct the statewide key that is now open for business.

The most interesting result of the VDGIF genetic survey was the extreme shell-morphological variation we documented in G. clavaeformis. Typical G. clavaeformis, as described in February of 1841 by Isaac Lea, bear rather vanilla shells of moderate thickness and rounded whorls. Goodrich (2) realized, however, that upstream populations can have more slender shells with a pronounced mid-whorl carination, a form that was originally described as "G. acutocarinata" by Lea, two pages after he described clavaeformis. Interestingly, it was acutocarinata that Pilsbry & Rhoads chose as the type of the genus Elimia, since that nomen appeared first in the alphabetical list of odd-lot taxa gathered into the genus by H. & A. Adams (1854). That acutocarinata was subsequently recognized as a synonym of clavaeformis by Goodrich had no bearing on the taxonomic controversy that ensued (3).

Although I was well aware of the acutocarinata/clavaeformis connection, I must admit to being fooled by the dazzling variety of shell phenotypes that met my eye when I first peered into the clear, cold waters of Indian Creek, a tributary of the Powell River in Lee County, at the southwestern tip of Virginia. I honestly thought I could distinguish six pleurocerid species. In the headwaters I recognized G. carinifera in addition to G. simplex and G. arachnoidea. Further downstream I found Leptoxis praerosa and Pleurocera unciale. And Goniobasis clavaeformis appeared to range throughout Indian Creek, headwaters to mouth, in all manner of shapes and sizes.

The gels soon showed that there was no genetic difference between samples I'd originally identified as G. carinifera and G. clavaeformis. In retrospect, I'm not sure what led me to draw a distinction between carinifera and Goodrich's acutocarinata. But a much greater surprise greeted me when I examined the gels run on samples taken from the mouth of Indian Creek, where it joins the Powell River just over the border in Claiborne County, Tennessee. There is no genetic difference between Goniobasis clavaeformis and downstream samples of Pleurocera unciale (PDF available at Note 4).

The shells borne by snails described as Pleurocera unciale by Haldeman in October of 1841 are broader and heavier than those of G. clavaeformis, their whorls marked with a prominent anterior angulation. Nineteenth-century taxonomists considered such an anterior angulation (and the notch it creates in the shell aperture) so significant that the genus Pleurocera was erected to contain any species distinguished by it. That two samples appearing to represent distinct genera of snails might in fact comprise a single randomly-breeding population seems improbable in the extreme.

But it has been reported before. Last month we reviewed the life and work of Calvin Goodrich, whose 20-year study of pleurocerid diversity in the American South led him to a modern understanding of evolutionary biology much earlier than almost any of his contemporaries (5). And it will be recalled that between 1934 - 1941 Goodrich published a series of papers entitled, "Studies of the Gastropod Family Pleuroceridae," describing extensive intraspecific variation in shell morphology along stream gradients. 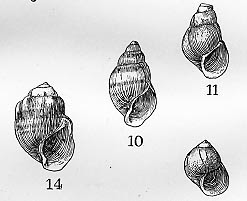 In "Studies" Number I (6), Goodrich documented a striking gradient in shell "obesity" (measured as the maximum shell diameter divided by the length of the last two whorls) in the Lithasia geniculata population of the Duck River in central Tennessee. Populations of the typical subspecies L. geniculata geniculata (#14 above) collected downstream showed high obesity, populations from middle reaches (subspecies fuliginosa, #10 above) demonstrated intermediate obesity, and populations from the headwaters (subspecies pinguis, #11 above) were quite slender. In fact, such pinguis populations differed in their shell morphology so greatly from typical Lithasia that they were originally placed by George Tryon in the genus Anculosa.

Here I offer a new term, "Goodrichian Taxon Shift," and define it as intraspecific variation in freshwater gastropod shell morphology along an environmental cline of such magnitude as to prompt the erroneous recognition of multiple nominal taxa. And as Exhibit A, I offer the G. clavaeformis population of Indian Creek (see image at Note 7, below). I predict that many additional examples of Goodrichian taxon shift, likely ecophenotypic in origin, will come to light as modern genetic techniques are applied to natural populations of freshwater gastropods in all groups. And I think that Calvin Goodrich would hardly have been surprised.