My faithful readership may recall a review I posted last December on the ever-intriguing phenomenon of passive molluscan transport entitled, “Freshwater gastropods take to the air, 1991 [1].”  That essay was focused entirely on unpublished material I developed for my (2000) book over 20 years ago.  What have we learned since then?

A lot, actually.  But before training our intellectual laser beams on recent research progress in the avian dispersal of freshwater gastropods in detail, I should spend a paragraph to acknowledge a pair of more general reviews contributed in the mid-2000s by Figuerola and Green [2].  The F&G reviews are especially useful to place our admittedly-narrow focus on mollusks into the larger perspective. Most research published on the broader subject of avian dispersal in recent decades has been directed toward protozoans and microcrustaceans, as well as algal and plant propagules.  The charming review of Rees [3] was skipped over entirely by F&G, although they did cite the works of Boag [4] and Malone [5].  I found it interesting that across the entire subdiscipline of avian dispersal, more attention seems to have been directed toward internal transport in the gut passage than to external hitchhiking. 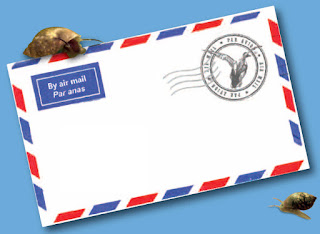 So in 2012 I was pleased to find the PhD thesis of a promising young scientist from The Netherlands named Casper van Leeuwen delivered to my snail-mail inbox.  That beautifully-printed 175 page work, with the whimsical cover illustration reproduced above, turned out to be a treasure trove of research on the avian dispersal of freshwater gastropods.  Some of the material in its eight chapters had just been published elsewhere as of 2012, other material was still on editor’s desks around the world.  Casper’s entire thesis, as well as the five journal articles it ultimately yielded, are all available from his professional website, see note [6] below.

Casper opened his studies with a general introduction, and a meta-analysis of 81 previously-published papers on the gut transport of macroinvertebrates and seeds, updating and refining the work of Figuerola & Green.  He got down to business in Chapter 3.

Casper reported the results of a set of feeding experiments involving mallards and four small species of aquatic gastropods common in The Netherlands: the little planorbid Bathyomphalus contortus and the hydrobioids Hydrobia ulvae [7], Potamopyrgus antipodarium, and Bithynia leachii.  The birds were fed 100 – 300 living snails and their feces collected for 24 hours.  Casper’s observations confirmed those of Malone, zero survivorship for Bathyomphalus, Potamopyrgus, or Bithynia.  But Casper did recover approximately 21 viable Hydrobia individuals, of 6,600 fed to the ducks.  Given the vast flocks of ducks that must visit the coastal marshes of Europe, the vast populations of Hydrobia that inhabit those marshes, and the vast expanses of time ducks have been eating snails, flying elsewhere, and pooping along the way, even a 0.32% survival rate is not negligible, I suppose.

The ducks Casper used for his Chapter 3 studies were all held in individual pens for the 24 hours following snail ingestion.  So in Chapter 4, he reported the results of an experiment to examine the effects of subsequent locomotion. Six mallards were fed 300 Hydrobia ulvae each and their feces collected during one of the three treatments that followed: isolation, wading, or swimming.  The entire experiment was repeated four times, for 4 x 3 x 300 = 3,600 snails ingested.  Casper recorded a total of 29 (0.81%) Hydrobia surviving the experiment, marginally better than his Chapter 3 results, but still “too low to compare between treatments.”  My eyeball impression of his Table 4.S1 suggests to me, however, that swimming was more harsh on the gut contents than wading, and wading more harsh than isolation.  Which makes me wonder if both of Casper’s estimates of survivorship, 0.32% and 0.81%, might be biased above their natural values.

As unlikely as all these highly-unlikely events most certainly are, I really think transport of viable freshwater gastropods on the outside of birds is less unlikely than their transport on the inside.  So in Chapter 5, Casper reported results from several experiments designed to evaluate the likelihood that snails might adhere to the feet, feathers, and bills of ducks and survive their subsequent dehydration.  The most interesting of these experiments involved three small European pulmonates: Lymnaea peregra (aka “Radix balthica” [8]), Gyraulus albus, and Anisus vortex.  Casper constructed cages with shallow removable trays in the bottom, into which he introduced a mixture of aquatic macrophytes and snails at four densities [9].  Individual mallards were placed in these cages for 60 minutes, totaling 48 ducks over 4 days.  Each duck was then released to walk through a 3 meter tunnel, washed and brushed, and given a final inspection.

The bottom line was that snails were transported out of the cages in 34 of the 48 trials – more of the little planorbids than the Lymnaea.  Casper reported that most snails were shed off the birds during their tunnel walk, but that some remained attached through brushing and washing to final inspection [10]. 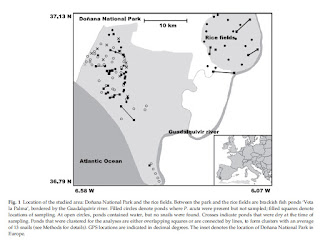 In his Chapter 6 Casper flew the barnyard for the field, picking up his genetic tool box as he flapped out the back gate.  The Donana National Park is a protected wetland region in southwest Spain, featuring marshes, dunes, shallow streams, and over 3,000 hydrologically-isolated ponds.  Roughly half of these ponds dry during an ordinary summer, and roughly half of those remaining are inhabited by populations of Physa acuta.

The nearest source for all these hundreds of isolated Physa populations is the Guadalquivir River, and especially a set of rice field connected to the river, 10 km east of the park.  Here’s a thought-experiment.  How could you distinguish vector-mediated dispersal from dispersal by sheetwater flooding in such a situation using a microsatellite survey?

Casper and his colleagues sampled the Physa populations at 21 sites, including 16 in the isolated ponds of Donana Park and 5 in the rice fields of the Guadalquivir River and estimated genetic variability using six previously-published microsatellite markers.  And as you might expect regardless of dispersal mechanism, the 16 park populations showed significant subdivision, while the 5 rice field sample sites did not.

But here’s the key.  Casper was able to distinguish two types of Physa ponds within the park, those that were often visited by large mammals (primarily cattle) and those that were rarely visited [11].  The high-cattle ponds showed less genetic subdivision than the low-cattle ponds.

The graph below shows a measure of genetic divergence plotted as a function of distance across all 16 populations [12] in the park.  These are all-pairwise distances, so the data are not independent.  But a Mantel test returned a significant correlation between geographic distance and genetic divergence in the low-cattle ponds, not in the high-cattle-ponds.

This observation has two implications.  Most importantly, it suggests that dispersal has been vector-mediated, since there is no reason to expect sheetwater dispersal to differentiate high-cattle ponds from low-cattle ponds.  It also suggests that at least sometimes, large mammals [13] transport Physa. 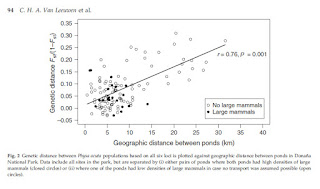 These results are reminiscent of a similar study Amy Wethington and I published back in 1995 involving 10 Physa acuta populations sampled here in the South Carolina lowcountry [14].  We documented a similar correlation between genetic divergence and simple overland distance across local “sea islands,” despite intervening brackish tidal creeks.  And extrapolating the results of Van Leeuwen and his colleagues about as far as you can go, they also remind me of my dissertation research on 25 populations of Pleurocera proxima in the Southern Appalachians, published way back in the dark ages [15].

The correlation between genetic divergence and simple geographic distance overland was strong for P. proxima too, over a 200 km study area extending into three states, completely independent of drainage system or mountain ranges.  Of course, levels of genetic divergence among pleurocerid populations are much more profound than among physids, and the duration of isolation must be far longer.  I continue to think my P. proxima populations evolved tens, if not hundreds of millions of years ago, possibly at the Appalachian orogeny, and have been diverging since [16].  But I also think this isolation has been punctuated by very rare, but nevertheless significant, airlifts of individual wildebeest into the bison herds [17].

As if all the research reviewed above weren’t enough to earn Casper a Ph.D. four times over, he actually finished his thesis with a Chapter 7 survey of ITS1 rDNA sequence divergence in Lymnaea (Galba) truncatula sampled over four continents.  But let’s defer that study to another day, shall we?  I feel as though the time has come to sum up.

That freshwater gastropods most certainly can be passively dispersed over extensive distances overland has been established for at least 50 years, indeed longer [18].  More recent generations of scientists have shifted our research focus away from the whether, and increasingly toward the how.  Birds can plausibly serve as vectors for the transport of viable freshwater snails over substantial distances, more likely on their outsides than their insides.  Genetic markers suggest that dispersal across terrestrial barriers, probably by birds but sometimes by other agents, has significantly influenced rates of interpopulation divergence in freshwater gastropods.  I, for one, have become increasingly intrigued by observations of their absence than their presence.

[6]  Casper’s professional website is www.caspervanleeuwen.info/  From there pdf downloads are available for:
[7] Hydrobia ulvae is not a freshwater snail.  But sometimes we bend the rules in this blog, a little bit.

[8] See footnote [6] here:
[9] Casper did not count the snails in these experiments.  The four densities were created using four different volumes of mixed weed, assuming uniform distribution of the three pulmonate populations (by ratio) within.

[10] It is difficult to estimate the actual numbers of snails transported from Casper’s graphs.

[11] Casper and his colleagues evaluated the intensity of large mammal visitation using the densities of “droppings” surrounding each pond.  This is the third time my essay has touched on the subject of poo.  A new record.

[16] Dillon, R T. and J. D. Robinson (2009)  The snails the dinosaurs saw: Are the pleurocerid populations of the Older Appalachians a relict of the Paleozoic Era?  Journal of the North American Benthological Society 28: 1 - 11.  [PDF]  See:
[17]  This is the “jetlagged wildebison” model I proposed last spring:
[18] Charles Darwin, Freshwater Malacologist [25Feb09]
Posted by Rob Dillon at 11:40 AM 2 comments: 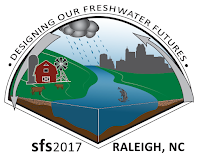 This is just a quick note to alert all my colleagues in the Society for Freshwater Science that I am planning to attend this year’s meeting in Raleigh June 4 – 8.  Come visit me under the “Gastropoda” sign at the taxonomy fair, and bring all your vials of tiny beat-up Physa.  I’m also offering a first glimpse of our next big survey, The Freshwater Gastropods of The Ohio.  Evans, Pyron, Watters, Reeves, Kungblenu, Bailey, Whitman and I have logged over 4,500 records from an eight-state area, recording 64 species and subspecies.  Some other than Physa.  See you in Raleigh!
Posted by Rob Dillon at 8:48 AM No comments: