The Freshwater Gastropods of The Ohio!

We are excited to announce the grand opening of a major new web resource, The Freshwater Gastropods of The Ohio, by Martin Kohl, Ryan Evans, Mark Pyron, Tom Watters, Kevin Cummings, Will Reeves, Jeff Bailey, Mike Whitman, and myself.  Check it out:
http://www.fwgna.org/FWGO/

Here we report the results of a comprehensive freshwater gastropod survey conducted over all waters draining into the Ohio River above the mouth of the Tennessee/Cumberland, an area of some 144,000 square miles.  Roughly 37% of the 5,250 records the team gathered were from museums, 35% from natural resource agencies, and 26% from original field collections.  We identified 70 species and subspecies of freshwater gastropods inhabiting this vast study area, providing a dichotomous key, a photo gallery, range maps and ecological notes for each. 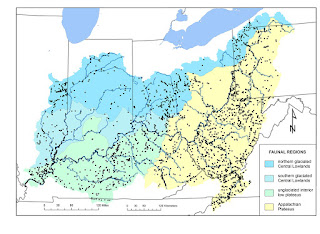 With the addition of the Ohio fauna to the faunas of the Atlantic and Tennessee drainages previously documented, the overall coverage of the Freshwater Gastropods of North America web resource has expanded from 89 to 113 species and subspecies, inhabiting all or part of 15 states.  The main FWGNA site now features an updated “Synthesis 3.0” in which every element of this diverse and far-flung fauna is ranked and classified into quartiles by incidence, using the Gaston system we pioneered back in 2013.

The entire site has been spruced up and polished to a fine sheen.  Even the bibliography has been updated, now featuring 268 entries.  Visit us again, for the first time!
Posted by Rob Dillon at 7:15 AM No comments: