The Lymnaeidae 2012: Tales of L. occulta

Editor's Note. This essay was subsequently published as Dillon, R.T., Jr. (2019b)  The Lymnaeidae 2012: Tales of L. occulta.  pp 29-35 in The Freshwater Gastropods of North America Volume 2, Essays on the Pulmonates.  FWGNA Press, Charleston.


We last reviewed the classification of the Lymnaeidae on 28Dec06 (1).  And faithful readers may remember that I am a big fan of Bengt Hubendick's 1951 work of genius, demonstrating that the worldwide Lymnaeidae "possesses great morphological uniformity, while there is a wide range of variation within the various species (2)."  Hubendick recognized about a dozen species in North America, which he saw no reason to subdivide (3), placing them all in the typical genus "Lymnaea."  Meanwhile other workers have continued to carry 50-60 North American lymnaeid species over from the era of Frank Collins Baker, recognizing as many as seven genera.  The system we have adopted for use in the FWGNA project is a compromise, accepting Hubendick's broad concept of the genus, while retaining the seven intermediate-level taxa as subgenera.

Has there been any progress since Hubendick?  The quick answer is yes, but not much here. 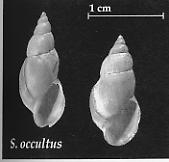 In a career spanning over 50 years, Poland's Maria Jackiewicz made a significant contribution to our understanding of the European Lymnaeidae (4).  And it materializes that the large, dark, marsh-dwelling populations which Hubendick lumped under the name "Lymnaea palustris" in Europe may comprise as many as five cryptic species, distinguishable by detail of reproductive morphology.  Jackiewicz rescued several names from synonymy under palustris and described one species afresh in 1959, "Galba" occulta (Figured above left, 5).  Her thinking on the higher classification of the Lymnaeidae has continued to evolve over the years, but as of 1998 she had three of these cryptic species (including palustris and occulta) in a subgenus Stagnicola and two of these species grouped with L. stagnalis in the (typical) subgenus Lymnaea (6).

In 2008 an important asterisk was added to the work of Jackiewicz by Vinarski & Gloer (7).  They demonstrated that populations previously referred to L. occulta in northern Europe range across Russia from the Baltic Sea to the Bering, and that the species seems to have first been described from Siberia as L. terebra (Westerlund, 1885).  All the way to the Bering land bridge, but not over it?  Indeed?

Meanwhile, back in North America, Hubendick was not able to distinguish any of our dozens of nominal species of dark, skinny, marsh-dwellers from European L. palustris either, but he did separate our pale, broadly-shelled inhabitants of exposed environments as either L. catascopium (Say 1817) or L. emarginata (Say 1821).  And H. J. Walter (1969) could not distinguish emarginata from catascopium (Right below, 9).  In an 102-page tour-de-force, Walter (8) disassembled a large sample of Michigan L. catascopium all the way down to the nuts and bolts, polished each part to a lustrous sheen, and re-assembled the whole into a sparkling wonderland of basommatophoran imagery.

And in a brief sidebar that I think may prove stunningly prescient, Walter wrote, "A lymnaeid recently discovered in Poland, and described as a new species (Lymnaea occulta Jackiewicz, 1959), undoubtedly is of advanced stagnicoline character (like L. catascopium); one may suspect that it is an American species introduced into Europe."  So the pale, broadly-shelled, inhabitant of exposed environments we call L. catascopium here in North America is anatomically indistinguishable from the dark, slender-shelled inhabitant of marshes called L. occulta in Europe and L. tarebra across Siberia? Indeed?

But despite the contributions of H. J. Walter, research on the lymnaeid populations generally referred to Stagnicola (at the full genus rank) here in North America has, well, stagnated.  J. B. Burch reverted to the Baker system in his 1982 "North American Freshwater Snails," recognizing 5 nominal species in his dark-skinny "Stagnicola elodes group" and 16 nominal species in his pale-broad "Stagnicola catascopium/emarginata group (10)."  And that’s where we’ve sat for 30 years.

Which is not to say that no research has been published.  The first gene trees were constructed for the Lymnaeidae in 1997 by the North American researchers Remigio & Blair (11), and I’ve tossed at least twenty additional papers onto the stack with Remigio in the last 15 years, almost entirely European in origin, many of them execrable, beneath citation.  The phylogeny suggested by a gene tree is not a predictor variable; it is a response (12).  Do we know enough about the biology of the lymnaeid snails to make sense out of all the sequence data published in recent years by Remigio, Bargues, Mas-Coma, Pfenninger, Streit, Jarne, Pointier, and others?

We will address that question more fully in a future post.  But for now I will introduce just one little snippet from an ML tree based on a concatenation of 16s, ITS-1 and ITS-2 published by Correa and colleagues in 2010 (13).  The sequence divergence across all seven North American stagnicoline samples shown above - including Michigan elodes, catascopium and emarginata - is less than 5% (Click to see the whole tree).  And no more than a few percent distant from the North American stagnicolines is a sample of L. occulta from Poland (14).  Correa and colleagues hypothesized that "L. occulta was actually introduced in Europe from North American populations."  Indeed?

(1) The Classification of the Lymnaeidae [28Dec06]

(3) Hubendick did consider the limpet-shaped North American taxon Lanx sufficiently distinct to warrant recognition at the genus level.  But Walter (Ref 8) wrote, "the limpet-like lymnaeids are more closely related to some species of "Stagnicola" than are some species of "Stagnicola" to each other, and therefore I must reject the taxa Lancinae and Lanx."

(4) Jackiewicz has probably published at least 10 -15 papers on the European stagnicolines in her career, but the most accessible to a North American audience is probably:
Jackiewicz, M. (1998)  European species of the family Lymnaeidae (Gastropoda, Pulmonata, Basommatophora).  This was published as a stand-alone volume of Biologica Silesiae, but is usually cited as a serial, Genus 9: 1 – 102.

(9) This specimen of L. catascopium was collected from Oneida Lake in upstate New York.

(10)  J. B. Burch's North American Freshwater Snails was first published in 1982 by the U.S. Environmental Protection Agency, then as a serial in the journal Walkerana, and then finally (1989) as a stand-alone book.  (Malacological Publications, Hamburg, MI).

(14) None of the eight sequences on this particular branch of the tree is original with Correa et al.  The North American sequences are from Remigio and the L. occulta sequence is from M. D. Bargues and colleagues.
Posted by Rob Dillon at 6:34 PM 1 comment: