Malacological Mysteries I: The type locality of Lymnaea humilis

Editor's Note. This essay was subsequently published as Dillon, R.T., Jr. (2019b)  Malacological mysteries: The type locality of Lymnaea humilis.  pp 13-21 in The Freshwater Gastropods of North America Volume 2, Essays on the Pulmonates.  FWGNA Press, Charleston.

Lymnaea humilis (Say, 1822) was among the first North American lymnaeids to reach formal description. Thomas Say's terse, one-paragraph effort was quite vague (1), no figure was provided, and the type specimens have been lost. But the diminutive shell size that Say specified, “seven-twentieths” of an inch (9 mm), was sufficiently diagnostic for subsequent authors to connect his nomen “humilis” to an extremely common and variable species widespread through most of the United States and Canada. Hubendick (2) listed at least 18 junior synonyms of L. humilis (3), and there are certainly more.

Say's type locality has always been given simply as "South Carolina," my vastly triangular home of 83,000 km2. Thus I was a bit daunted last week, but not especially surprised, to receive a request for topotypic Lymnaea humilis from a parasitologist affiliated with the World Health Organization, Prof. Dr. Dr. h. c. Santiago Mas-Coma of Valencia, Spain. Lymnaea humilis is a potential host of the liver fluke Fasciola, primarily a parasite of livestock but occasionally infecting man (4).

This post is an open reply to Prof. Dr. Mas-Coma. Here I report the rediscovery of a population of lymnaeids from the Charleston area that may plausibly have served as the basis for Thomas Say's 1822 description, review subsequent developments through which the concept of L. humilis seems to have shifted from the Charleston-area species to a second species ranging further north, and propose that the type locality of L. humilis should not continue to be given as "South Carolina," but rather restricted to a site on the Susquehanna River in New York.

Identification of the precise point of origin for the 9 mm lymnaeids on Thomas Say's desk in 1822 presents a bit more than the usual challenge. It seems clear that the sample was sent to him from Charleston. The author's acknowledgement of a "Mr. Elliott" in the species description was certainly a reference to the noted Charleston naturalist, Stephen Elliott (1771 – 1830), primarily a botanist but with a wide variety of interests. Elliott's collected papers at the Gray Herbarium Library contain an 1822 letter from Thomas Say with identifications for a box of shells.

The problem, however, is that suitable habitat for small, amphibious lymnaeids is not common in the Charleston area. Such snails are typically found on mud or exposed surfaces above the water’s edge. But throughout the Carolina lowcountry and coastal plain, fresh waters have indistinct and variable margins, choked with aquatic and semi-aquatic vegetation. Lymnaea humilis does not seem well adapted for life on the leaves and stems of macrophytes.

In his 1911 monograph, F. C. Baker (5) cited two Charleston-area collections of L. humilis courtesy of W. G. Mazyck, "a low lot in Alexander Street, now filled up and destroyed," and "Sullivan's Island, four miles from the city." Recently our former student and colleague Bryan England has redirected our attention to the freshwater gastropods of Sullivan's Island, and especially to the unexpectedly abundant fauna inhabiting the vernal ponds that form behind dunes and formerly dunal areas.

Sullivan's Island has a long and interesting history. Colonel William Moultrie built a palmetto-log fort on its western end in 1776, from which he successfully repelled an amphibious assault by the British. A brick and masonry fort bearing Moultrie’s name was constructed on the site in 1809 to defend the eastern approach to Charleston Harbor. Among its famous residents have been the Seminole chief Osceola and Edgar Allen Poe, who was posted to Sullivan's Island in 1827-28.

Access from Charleston to Sullivan's Island in the 19th century should have been very convenient, through the regular ferries and packets supplying Fort Moultrie. Stephen Elliott could easily have taken advantage of such transportation to explore the great variety of habitats that must have been available outside the immediate vicinity of the Fort, ranging from farm to maritime forest to marsh. 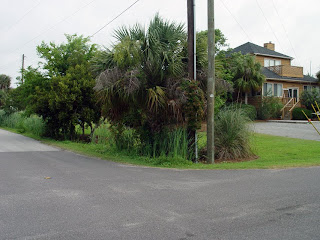 Today most of the island is residential, crisscrossed by roads and drainage ditches. Such ditches are vernal, with a muddy sand base, and typically vegetated with cat-tails and alligator weed (Above, Note 6). And on the exposed margins of the shallow water that fills these ditches after a spring rain, one can find small lymnaeids matching Say’s 1822 description (Below, Note 7). The complication is that, using modern criteria, these little snails would not be identified as Lymnaea humilis today, but rather as Lymnaea cubensis (Pfeiffer, 1839). Click the photo below for an enlargement. 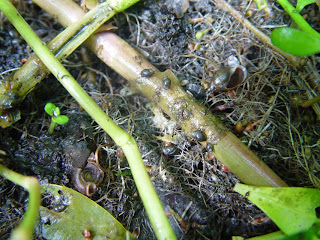 I believe it was F. C. Baker (1911) who published the first systematic observations on the radula of the Lymnaeidae (5). He did not have access to South Carolina humilis (ss), which he assigned to the genus "Galba," but he did publish observations on two taxa he considered subspecies, G. humilis modicella and G. humilis rustica, both of which bore three cusps on their first marginal teeth (Below, Note 8). At the same time he also observed that the radula of Galba cubensis bore bicuspid first marginals. 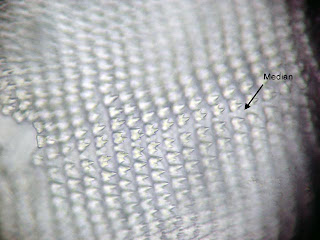 By 1928, Baker (10) had discarded "Galba" in favor of "Fossaria" as a genus to contain small amphibious lymnaeids of this sort. Tricuspid species he kept in the subgenus Fossaria (ss), and the bicuspid species (Below, Note 9) he separated to a new subgenus "Nasonia," which was subsequently emended to "Bakerilymnaea" (11). See my post of Dec '06 for a review of the tortuous history of the classification of the Lymnaeidae. 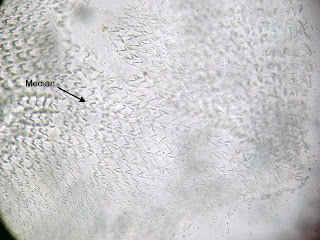 In any case, the association of the name humilis with tricuspid populations persisted. Hubendick (2) collapsed all the little "fossarine" lymneids of North America down to four: tricuspid truncatula in Alaska (12), tricuspid humilis through Canada and most of the United States (including South Carolina), bicuspid bulimoides west of the Mississippi River, and bicuspid cubensis ranging only as far north as Florida, Louisiana, and Texas.

But Say specified nothing about the radula in his original description. His three brief sentences referred only to the shell, and would fit bicuspid and tricuspid taxa equally well. And recent field observations suggest that bicuspid populations are widely scattered through coastal areas of South Carolina and into North Carolina as well. But the nearest population of small, amphibious lymnaeids with tricuspid first-marginals to Charleston seems to be by the Catawba River in Lancaster County, about 250 km north.

At this point in the history of American Malacology, the nomen humilis has become firmly associated with the tricuspid populations common through most of the United States and Canada. It would be a great disservice to workers in the field today to reapply Say's 1822 name to the southern bicuspid populations now known as L. cubensis, leaving one of 18 younger names for the tricuspid. I therefore propose that the type locality of L. humilis be reassigned.

The concept of the "type locality" did not exist in the early 19th century. And fortunately, Thomas Say mentioned a second locality in his 1822 description of Lymneus humilis. He wrote, “It differs much from any other species I have seen; a variety of it, sometimes quite black, was found by Dr. M'Euen at Oswego on the Susquehanna." I interpret this comment to mean that, although Say's description did in fact initially state, "inhabits South Carolina," the author considered that his Lymneus humilis ranged throughout much of North America. Hence it is within the discretion of subsequent workers to "restrict" Say's type locality, under Recommendation 72E of the International Code of Zoological Nomenclature, to some more precise spot.

The present essay is not a publication for purposes of the ICZN. But I have gotten the impression from our colleague Prof. Dr. Mas-Coma that he is currently working on such a publication, and that the specimens from Sullivan's Island I am packing to send him this week will figure in it. So in the final analysis, this post is an informal appeal to him, and to all workers who may follow us into posterity. Let us restrict the type locality of Lymnaea humilis (Say 1822) to the banks of the Susquehanna River, where the little amphibious lymnaeids are entirely tricuspid.

There is yet one final complication. In 1825, Say formally described the population "found by Dr. M'Euen at Oswego, on the Susquehanna River" as Lymneus modicelles. It was this taxon that Baker (1911) lowered to subspecific rank, as Galba humilis modicella, noting as he did that Say misspelled the name of the town. The locality is correctly spelled Owego, not "Oswego."

In conclusion, let us resolve henceforth that the type locality of Lymnaea humilis shall not be "South Carolina," but rather Owego, Tioga County, NY, on the Susquehanna River. And I plan to write "Lymnaea cubensis" on the label of the vial I'll be packing for Valencia tomorrow.

(4) There's a fairly complete introduction to the biology of Fasciola, from the snail's point of view, in Chapter 6 of my book: Dillon, R. T. (2000) The Ecology of Freshwater Molluscs. Cambridge University Press.

(6) Cat-tails mark the ditch at the NE corner of Atlantic Avenue and Station 26.5. The use of "station" rather than "street" in Sullivan's Island harkens back to the days when there was regular trolley service from Charleston.

(7) The habitat close-up shows quite a few small, amphibious lymnaeids, as well as the dead shells of Physa acuta and a land snail. For scale, the Physa shell is 10.2 mm standard length.
.
(8) Radula of L. humilis, collected by the James River in Botetourt Co, Virginia. The median row is marked with an arrow. Examine the rows immediately to the left and right of the median row to see the tricuspid first marginals.

(9) Radula of Sullivan's Island lymnaeids. Again, the arrow marks the median row – look to the left and right for bicuspid first marginals.

(12) Lymnaea truncatula (Muller 1774) is a holarctic species common throughout Europe and Asia. Hubendick wrote, "It is a matter of some doubt whether L. humilis in North America is a distinct species or is specifically connected to L. truncatula." This would be a fertile ground for future inquiry.
Posted by Rob Dillon at 4:31 PM No comments: