I am pleased to report the rediscovery of Gillia altilis in South Carolina, the 26th freshwater gastropod taxon confirmed living in the state today. This discovery, in addition to its value as an item of general good news, has strengthened a couple of convictions I've held for some time, perhaps of some broader interest, perhaps now worth sharing.


But first, a bit of biological background. Faithful correspondents may remember an essay I posted on 26May04 admitting my own long standing confusion regarding Gillia, Amnicola, Lyogyrus and Somatogyrus, four hydrobiid genera of the southern United States bearing similarly plain shells. That essay featured a photo comparing the four taxa that may be worth revisiting [Somatogyrus in the Southeast].

In any case, Gillia is much larger than any of these other hydrobiid genera, and is really quite unmistakable, now that I've held one in my hand. The Figure Below shows a 7.8 mm individual crawling in a beaker. The collection I made earlier this month was comprised entirely of adults ranging from 6 - 8 mm in shell length, twice the size of typical adults from either Amnicola or Somatogyrus, three times that of Lyogyrus. The shell is intermediate in thickness between the lightly-shelled Amnicola, more characteristic of lentic environments, and the heavily-shelled Somatogyrus, an inhabitant of rocky riffles. 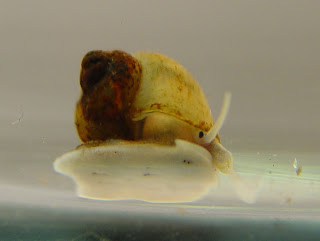 Gillia altilis was first described by Lea (1841) using specimens sent him from the Santee Canal, an 1800 - 1850 passage between the port of Charleston and the Santee River 40 miles north. Only remnants of that canal remain today. The Charleston Museum holds two nineteenth-century lots of Gillia, one labeled simply "Santee Canal" and the other "Lynch's Creek."
.
I rediscovered the species Tuesday, January 11, at the US 52 bridge over the Lynches River 8 miles south of Florence, where I'd stopped on a whim. We'd had two weeks of unusually mild weather here in the southeastern US, and very little rainfall. The Lynches River was very low, and the morning so warm and bright, I pulled off the road primarily to stretch my legs and enjoy the fresh air. The water was black (as normal) but clearer than usual. I found Gillia altilis moderately common on the riprap used to stabilize the banks directly under the bridge. Individuals were also grazing on hard-packed clay. Three other freshwater gastropods were also present: Physa acuta, Goniobasis catenaria catenaria, and Amnicola limosa. Sometimes it seems to me that hydrobiid populations are positively associated - the occurrence of one species making a second more likely.

Here's the first moral I have derived from this experience - the value of revisiting sample sites. I had previously made collections at this site at least three or four times in the past under good conditions and had never found a trace of Gillia. Certainly, I had no previous observations from the winter, nor had I previously sampled water conditions quite this low. But I feel certain that Gillia is a perennial, and as common and conspicuous as the things were earlier this month, it's hard to believe I missed them entirely four times. I was tempted to subtitle this essay, "Humbled by hydrobiids again."

I've had similar experiences many times in the past. There's a spot on the Combahee River at Yemassee about 50 miles south of Charleston, for example, I've sampled at least annually for eight years. It's the type locality of Physa hendersoni, which we've been using for experiments on reproductive isolation in pulmonates. Prior to last March I had catalogued five pulmonate species from the site, generally collected during the course of my hunts for P. hendersoni. Last March, however, I found every stick and rock in the Combahee River covered with Amnicola granum, a species of which I had no prior record, and the five pulmonates had almost vanished. Freshwater gastropod populations are flashy. Revisit your sites.

The second moral of this story is never to underestimate the hidden potential of crappy rivers. The Lynches River arises in the lower piedmont of South Carolina, and on its roughly 150 mile journey to join the Pee Dee River passes through a watershed characterized by intensive row crop farming. Erosion and sedimentation have certainly been major problems for over 300 years, and who knows what sort of chemicals they spray on that cotton. Yet Goniobasis is very common in several of its upstream tributaries, and (again, as faithful readers may remember) the only modern record of Lioplax in South Carolina is also from the Lynches, about 40 miles upstream from the US 52 bridge (See my post of 26Aug04). To appreciate the biodiversity value of any river, one needs much more than a glance at a map and a few casual visits.

The web page I posted on 9Mar04 to report the results of my (510 record) survey of the Freshwater Gastropods of South Carolina is now badly out of date. In the section on "recommendations" I wrote:

"The status of Gillia altilis in South Carolina, its type locality, is worrisome. Burch & Tottenham (1980) quote the range given by Walker (1918): 'Atlantic drainage from New Jersey to South Carolina,' although populations apparently live as far north as Vermont and west to Lake Ontario (Jokinen 1992). I have seen fairly recent collections of Gillia from the Waccamaw River of southern North Carolina, but have to date been unable to confirm its modern occurrence here."

The modern occurrence of Gillia in South Carolina is now no longer in doubt. It is the continued existence of the species here that becomes the question. Gillia should shoot right to the top of our state list of aquatic species of concern.

Posted by Rob Dillon at 2:01 PM No comments: