Springsnails of The Blue Ridge

Editor’s Note – This essay was subsequently published as: Dillon, R.T., Jr. (2019c) Springsnails of the Blue Ridge.  Pp 211 - 215 in The Freshwater Gastropods of North America Volume 3, Essays on the Prosobranchs.  FWGNA Press, Charleston.

I was born and raised in Waynesboro, Virginia, where the Chamber of Commerce likes to advertise that “The Skyline Drive meets the Blue Ridge Parkway.” The Skyline Drive runs 105 miles north from Waynesboro through the Shenandoah National Park to Front Royal, generally at 1-2,000 ft. elevation. South from Waynesboro the Blue Ridge Parkway extends another 412 miles through the mountains to Asheville, North Carolina, at elevations rising to 6,000 feet.
. 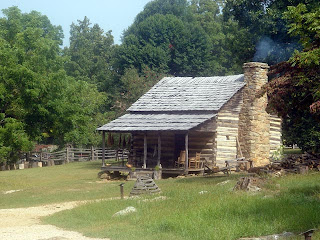 I spent many a lazy summer day in my youth picnicking with family on the SKD and the BRP, and not a few warm evenings at the overlooks with my girlfriend. One of my favorite spots was the visitor center at Humpback Rocks (BRP mile 5.8), where latter-day pioneers live in an authentic log cabin and farm the rocky hillside (Photo above). The tiny, hand-hewn springhouse on that property must have stood unchanged for 200 years (Photo below).
. 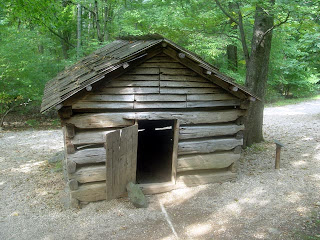 No surface water enters or leaves the springhouse at BRP mile 5.8. Water seeps up through the rocks, travels in complete darkness for about 3 feet, then seeps back into the earth and disappears. (A narrow PVC pipe has been installed to keep the path from becoming muddy.) But if you crawl through the door, grab a wet rock, pull it out into the sunlight and turn it over, you may be lucky enough to discover a scattering of tiny white hydrobiids, Fontigens orolibas (Hubricht), the spring snail of the Blue Ridge (The white snail below).
. 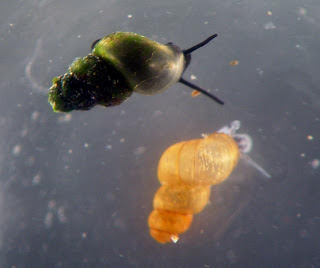 My attention was first called to this remarkable animal by the wonderful 1990 monograph of Hershler, Holsinger, and Hubricht, “A revision of the North American freshwater snail genus Fontigens” (Smithsonian Contrib. Zool. 509). To tell you the truth, I don’t know which is more amazing – the fieldwork of Leslie Hubricht, the scholarship of Bob Hershler, or the biology of the snails they have teamed up to document. The authors reviewed nine Fontigens species in their work, including four species from the Commonwealth of Virginia, meticulously documenting hundreds of remote and scattered populations.

So one fine morning not too long ago I set off up the Skyline Drive in my pickup truck, HH&H monograph in my lap and topo maps on the seat beside me, determined to visit as many populations of F. orolibas as I could before the sun went down. The habitats I sampled ranged from proper springs with good water flow down to wet seeps in grassy or marshy high meadows many miles from the nearest permanent water. The photo below shows a typical spring, at a visitor cabin operated by the National Park Service down the mountain below SKD mile 81. I found snails only on the underside of rocks very near such springheads, never in any abundance. 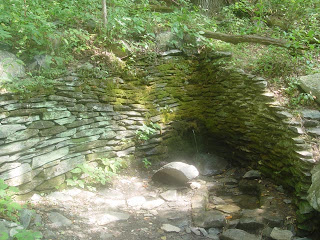 The animals themselves are typically no more than a couple millimeters long and essentially colorless. The figure above shows a 2.9 mm F. orolibas (below) crawling with an individual F. nickliniana, a widespread species found throughout the eastern U.S. in valley springs and spring runs. Fontigens nickliniana does not share the retiring habit of F. orolibas, and seems unafraid to crawl about quite brazenly on the open streambed. The body color difference is striking.

I was ultimately able to visit seven of the sites listed by HH&H as habitats for Fontigens orolibas – a pretty full day, but only 20% of the total sites they recorded. And I’m pleased to report successful collections of F. orolibas from five of them. The other two sites had been capped and the water diverted. But given the ephemeral nature of natural snail populations and their habitats, I think the confirmation of 5/7ths of any list of historical freshwater snail records is reassuring.

The little boy from Waynesboro who played hide-and-seek in the springhouse at Humpback Rock forty years ago knew, even then, that he wanted to be a professional biologist when he grew up. I’m not sure why, but a combination of “Wow, how interesting!” and “Man, that’s pretty!” played a big role. Spending a warm summer day hunting tiny populations of mysterious animals, scattered across the crest of the ancient Blue Ridge, it’s not hard to feel the wonder again.

Keep in touch,
Rob
Posted by Rob Dillon at 3:58 PM No comments: