Editor's Note.  This essay was subsequently published as: Dillon, R.T., Jr. (2019b)  The heritability of shell morphology in Physa H^2 = 0.819!  Pp 207-211 in The Freshwater Gastropods of North America Volume 2, Essays on the Pulmonates.  FWGNA Press, Charleston.

That’s the headline in the most recent edition of PLoS ONE, fresh on the news stands Monday morning.  Read all about it from the link below [1].

To place this remarkable statistic in perspective, animal breeders typically consider heritability in the range of 0.2 – 0.4 to be moderate, and heritabilities above 0.4 to be high.  The heritability of egg production in poultry is approximately h^2 = 0.10, milk yield in cattle about h^2 = 0.35, and weight gain per day in swine h^2 = 0.40 [2].  My colleague Stephen Jacquemin and I reviewed scores of estimates for the heritability of various aspects of gastropod shell morphology (marine, freshwater and terrestrial) in 14 peer-reviewed papers published since 1965, finding but one single value greater than h^2 = 0.819 ever reported [3].   For freshwater gastropods, the highest value reported to date (in a much smaller literature!) is h^2 = 0.30 [4].  How did Stephen and I arrive at our an eye-popping result? 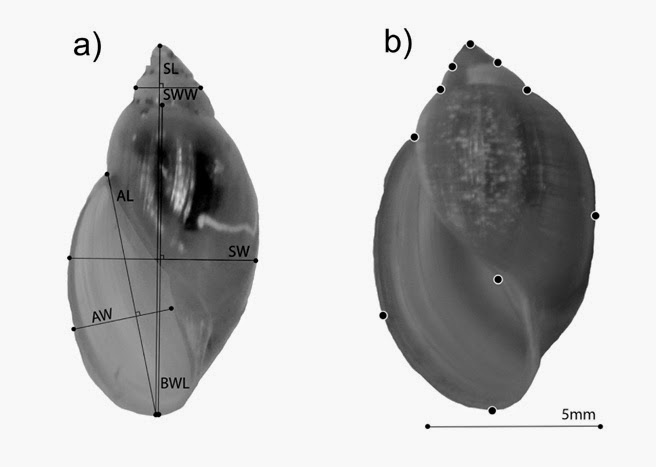 I should imagine that most of my readership will be familiar with the shell morphology of the cosmopolitan invasive Physa acuta, figured at right above.  The shell of Physa carolinae, the recently-described [5] inhabitant of southeastern coastal plains figured at left, is distinctly more slender and fusiform by comparison.  The two species hybridize readily, although the F1 are almost entirely sterile [6].

Stephen and I crossed four pairs of acuta, four pairs of carolinae, and four axc hybrid pairs, rearing all 24 parent animals in standard conditions to age 20 weeks.  We then raised 5 F1 progeny from each of these 12 crosses to age 20 weeks in identical conditions.  And for the entire set of 24 parents plus 60 F1 offspring we took six “classical” linear measurements of the shell and digitized 11 landmark points. 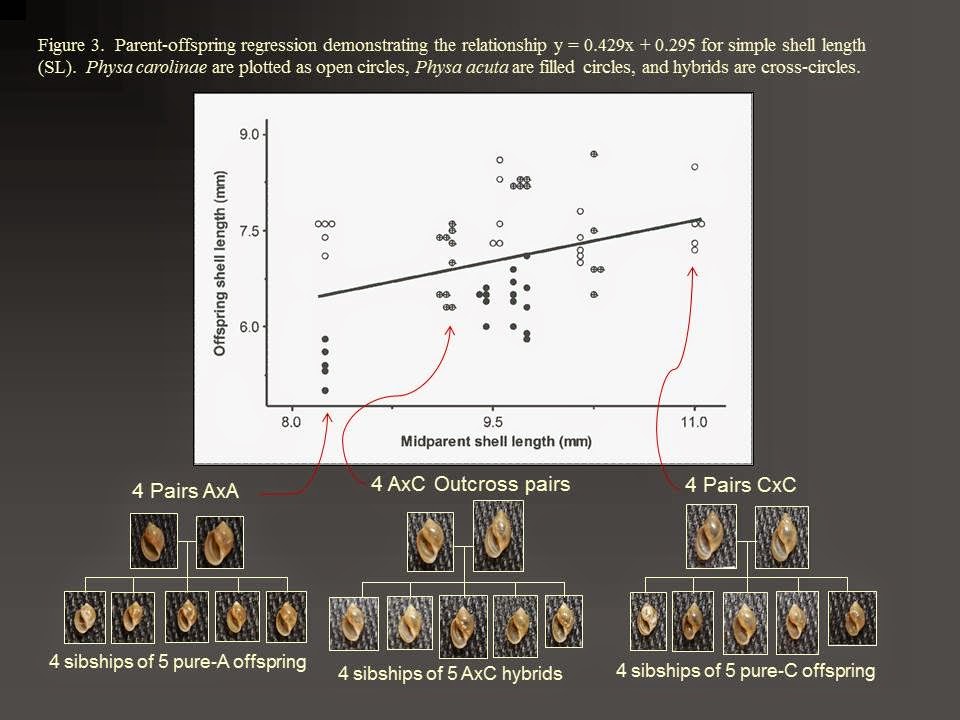 Stephen and I performed similar calculations for our five other simple linear measurements, the first and second principal components extracted from both the correlation and covariance matrices of these measurements, scores on the first three relative warp axes from a geometric analysis, and centroid size.  The heritability estimates for all 14 of these variables, with their p-values adjusted for multiple comparisons, are shown in Table 2 of our paper downloadable below.  And our headline estimate of h^2 = 0.819 (s.e. = 0.073) is for variance on the first relative warp axis (RWA1).

Now if overall “shell size” is defined as the summed distance from each of the 11 landmarks to their joint centroid, variance on RWA1 is significantly correlated with shell size at the 0.001 level.  So are almost all of the other 12 variables we measured (see Table 1 of our paper).  This implies that, as strikingly heritable as variance on RWA1 most certainly is, such variance may not be especially useful for inferring evolutionary relationships among natural populations of freshwater gastropods, which are inevitably composed of mixed ages.

Thus the second-most interesting result reported in the paper by myself and my buddy Stephen may not be the heritability of RWA1, but the h^2 = 0.312 (s.e. = 0.123) we estimated for score on RWA2.  This variance is not apparently correlated with overall shell size, and hence might (with some disclaimers) find application to populations of freshwater gastropods sampled from the wild.

And what might our first-most interesting result be?  I think it is the fact that Stephen and I were able to uncover any significant heritability in any aspect of freshwater gastropod shell morphology whatsoever.  The phenomenon of ecophenotypic plasticity is so pervasive in populations of freshwater gastropods as to warrant a separate heading in the blog index at right above, with 13 entries to date.  My stack of peer-reviewed papers documenting plasticity of shell morphology in freshwater snail populations stands 35 deep.  So quoting directly from the concluding paragraph of this our most recent addition to the literature, “Against such a background, the results reported in the present work can be viewed as providing a small measure of balance.”