Two Dispatches from the Pomacea Front

In May we reported the discovery of a population of South American apple snails (Pomacea insularum) in a residential subdivision near Myrtle Beach, South Carolina, extending the range of that invasive pest about 500 km north. This month we update our report with both good news and bad. We also report another surprise addition to the fauna of South Carolina, the native Florida apple snail (Pomacea paludosa), not typically considered to be an invasive species.

"I Was Scared for The Kids"

The bad news is that our Pomacea insularum introduction in the Myrtle Beach area has turned out to be much more extensive and longstanding than we originally reported, with several additional populations discovered in residential areas during the months of June and July, as well as on a golf course. As of 8/1/08, biologists from the SC Department of Natural Resources had found evidence of infestation in 35 ponds and water bodies (PDF map). The good news is that the DNR has moved promptly and efficiently to eradicate the snails, and we are fairly confident of success. 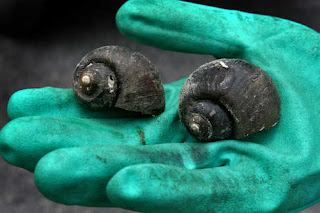 Media attention seems to have played an important role in mobilizing public sentiment. In late June, an invasion by "harmful snails" or "worrisome snails" was the subject of several television news stories and reports in the Myrtle Beach Sun News (1), and at least one article in The State (2) newspaper in Columbia. Reports specifically mentioned a threat of meningitis, and included quotes like, "There's thousands. They're all over," and "I was scared for the kids." Notice the heavy rubber glove on the hand holding the snails in The Sun News photograph at left. This seems to have prompted the general citizenry of the Myrtle Beach area to inspect all the local ponds and ditches, and to contact the DNR with requests for eradication. Our colleagues at the South Carolina Aquatic Nuisance Species Program have responded with an aggressive program of copper sulfate application, and we do hope that the problem is coming under control. 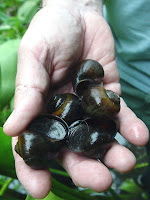 Yes, it's true! Earlier this week our DNR colleague David Knott and I visited Spring Island, a private golf and country club community south of Beaufort, SC, at the invitation of Dr. Chris Marsh of the Spring Island Trust. Thanks also to Tony Mills for serving as tour guide. We confirmed small but apparently well-established populations of the native Florida apple snail, P. paludosa, in two golf course ponds. That's David bravely bare-handing a sample at left. Note that the egg masses of P. paludosa are much whiter (and the individual eggs much larger) than those produced by the South American species introduced near Myrtle Beach (See the PDF flier from the SCDNR for several nice illustrations.)

Pomacea paludosa is primarily an inhabitant of the Florida Everglades, ranging as far north as springs by the Flint and Ocmulgee 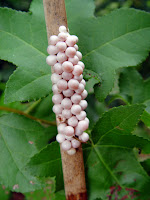 Rivers in south Georgia (3). It has never been considered "invasive." In fact, populations of P. paludosa seem to have been declining for years, as water flows have been disturbed, wetlands drained for development, and genuinely invasive species (such as P. insularum) spread through Florida. But Chris thinks it most likely that the Spring Island population of P. paludosa was introduced on aquatic vegetation when the golf course was constructed in the early 1990s. This does call into question the meaning of the word, "invasive," doesn't it?

(1) "Worrisome Snail Spreading to Two More Horry Subdivisions" Myrtle Beach Sun News, 3July08.If the direct link to the newspaper site above doesn't work, a copy of the article is available from the FWGNA.

(2) "Harmful Snails Invade South Carolina" The State (Columbia) 22June08.If the direct link to the newspaper site above doesn't work, a copy of the article is available from the FWGNA.