Mrs. Lori Schroeder manages her husband’s dental practice in Bardstown, Kentucky.  She is also a skilled and dedicated malacologist, who in recent years has expanded her interests from seashells to land snails and into the freshwater fauna.  Back in 2009 she volunteered to lead a “Bioblitz” survey of the land snails of the Bernheim Arboretum and Research Forest south of Louisville [1], collaborating with our good friends Harry Lee, the late Henry McCullagh and Bill Frank [2].  And several years ago I was blessed to strike up a correspondence.

Lori’s favorite method of surveying land snails is to pick through samples of forest litter, such as are often deposited along the courses of the several creeks and streams running through the 15,000 acre Bernheim property.  So it is not surprising that she occasionally finds freshwater gastropods mixed with her land snail collections.  I received my first emails from her in 2013 regarding the pleurocerids and physids of Bernheim, which I was pleased to entertain.

And I was pleased to receive another email from Lori this past January.  She sent to my attention a jpeg photo of a small planorbid, requesting guidance on the difference between Menetus and Gyraulus.  And, as an afterthought in some follow-up correspondence, she mentioned, “I also have a tiny unidentified hydrobiid species from the same lot.”

My antennae raised immediately.  I replied, “What’s this I hear about a tiny unidentified hydrobiid?  I’d be curious to see a photo of that one as well.”  And on 1 February 2017, this is the jpeg Lori sent me: 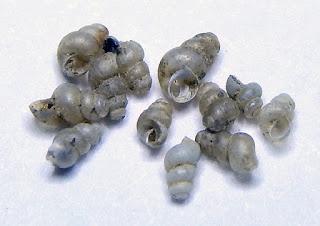 My antennae raised even higher.  Clearly a little pile of Fontigens, that diminutive inhabitant of springs, spring runs, and caves scattered widely throughout the Eastern and Midwestern United States.  I reached to the shelf beside my desk and pulled out my well-thumbed copy of the monograph by our good friend Bob Hershler and colleagues [3].  And here is the reply I sent Lori, under the subject line “OK, now you’ve got my attention:”

The jpegs attached to your message of earlier this afternoon appear to depict a hydrobiid population of the genus Fontigens.  My first guess would be the most common species, Fontigens nickliniana.  But upon closer examination, they might look more like published photos of Fontigens aldrichi, which I’ve never personally seen on the hoof.

The genus Fontigens was marvelously-well monographed by Bob Hershler and colleagues (1990).  And among the many surprises is that Hershler did not report any records of Fontigens of any species in Kentucky, period.  F. nickliniana is widespread in the Great Valley of Virginia, spreading up to Pennsylvania, and also in western Michigan, so one might assume that they range through Kentucky.  A lot of secondary references do indeed list F. nickliniana in your state.  But I myself have never seen a F. nickliniana population in Kentucky, and don’t know of any reliable record.

All that said, the flat nuclear whorl doesn’t really look like F. nickliniana.  Picture-matching to the other eight species recognized by Hershler, they look more like Fontigens aldrichi or Fontigens antroecetes.  But those species are not known outside of Missouri.

Bottom line.  Those shells were all dead-collected, am I right?  It would be great if you could find the living population, and send a preserved sample to Bob Hershler at the USNM.  Fontigens populations are often narrowly-restricted to springs and spring runs.  There’s a lovely, clean, clear, coldwater spring right upstream from your collecting site, am I correct?  Lots of watercress, I’ll bet?  You should find your big population of Fontigens at that spring head, covering the cress and every square inch of bottom.  Go look and tell me if I’m right.  Take a Nalgene bottle or something to collect in.

And here is Lori’s immediate reply:

I've been down the hydrobiid road with Dr. Lee and Dr. Fred Thompson at the Florida Museum previously [4].  I failed miserably to locate any living specimens.  That being said, I am more than willing to give it a second go.

It subsequently materialized that my speculations about a spring head with “lots of watercress” and “Fontigens covering every square inch of bottom” were very, very wrong.  And the situation much more complicated than I initially imagined.

Lori had found her little pile of Fontigens shells sorting through debris deposited along Harrison Creek by a catastrophic flood that ravaged the area in January of 2016.  Harrison Creek washes down through a lovely valley of old fields flanked by mixed hardwoods.  Yes, there are (indeed) small springs and caves on the ridges surrounding, but most issue water only in wet weather.

A further complication was that Lori had actually found Fontigens shells in similar circumstances along three different streams on the Bernheim property during the course of her extensive studies of the area, all in dry debris deposited by floodwaters, none downstream from any spring or other obvious source of groundwater.

And on 3 February 2017 Lori sent me another set of more detailed jpegs, giving a standard shell length of just 2.1 mm.  Adult F. nickliniana reach 3 – 4 mm, in my experience.

Broadly speaking, there are two categories of Fontigens in North America, which (given my Presbyterian heritage) I think of as being either “black” or “white” [5].  The black species, such F. nickliniana, F. morrisoni and F. bottimeri, are usually somewhat larger and live above ground.  The white species, such as F. orolibas, F. tartarea and F. turritella, are usually smaller and subterranean.  The shell photos Lori sent us on Feb 3 struck me as depicting a white species – not something we might expect to find at the surface.

Undaunted, Lori and her husband Jeff set out on what she called a “full-on blitz attack,” ultimately extending over several months and involving Andrew Berry, Forest Manager at Bernheim.  And I cannot remember ever witnessing, first-hand or second, a more earnest or comprehensive survey of any patch of the earth for any mollusk population, of land or sea.  Lori and colleagues surveyed every spring or cave or hole in the ground actually, potentially, or historically upstream or in the vicinity of every location where any Fontigens specimen had ever been recovered from Bernheim.  They also installed mesh traps over the openings of several culverts draining into Harrison Creek.  And the results, to quote Lori directly, were “Nothing.  Nada.  Zilch.”

From what dark recesses of central Kentucky knobland might Lori’s tiny little snails be emanating? Indeed, what might be their identity?  And will Lori Schroeder surrender her quest?  Tune in next time!

[1] The Bernheim Arboretum and Research Forest was originally developed in 1929 and endowed by the German philanthropist Isaac W. Bernheim “as a gift to the people of his new homeland.”  It is open to the public during regular daylight hours, with a small admission charge on the weekends.
Website: [html]

[2] The Kentucky land snail list is available at [Jaxshells-Kentucky].
Photos of many elements of the Bernheim freshwater gastropod fauna are also available from the jaxshells.org website, if you try the search button at the bottom of the front page.

[4] Yes, it materialized that the 2016 specimens were not the first Fontigens Lori had found in her nine-year survey of Bernheim.  Several years previous she had corresponded briefly with Fred Thompson about the little snails, but Fred was not interested unless she could find live material, and the matter dropped.

[5]  For an illustration of the striking black/white dichotomy see: