The Lymnaeidae 2012: Tales from the cryptic stagnicolines

Editor's Note. This essay was subsequently published as Dillon, R.T., Jr. (2019b)  The Lymnaeidae 2012: Tales from the cryptic stagnicolines. pp 37-43 in The Freshwater Gastropods of North America Volume 2, Essays on the Pulmonates.  FWGNA Press, Charleston.


Kip Brady is a Teacher of Science at New Philadelphia High School in eastern Ohio, and an all around nice guy.  In 2008 he hooked up with our good friend Andy Turner of Clarion University, initially attracted by the potential of freshwater gastropods as tools for the classroom.  Soon Kip became involved with Andy on an NSF "Research Experience for Teachers" study of freshwater gastropods and leaf litter processing at the Pymatuning Laboratory of Ecology (1).

But their study involved several populations of dark, marsh-dwelling stagnicoline lymnaeids that have proven extremely difficult to identify (Above, 2).  The variety of Lymnaea elodes that Andy & Kip consider "typical" in NW Pennsylvania has a rather slender shell, with an estimated mean adult width: height ratio around 0.37.  But in Hartstown Marsh (east of Pymatuning Reservoir) they found a "robust" variety V2, demonstrating a mean adult shell W:L ratio around 0.44 (3).

Andy and Kip showed samples of these two varieties to me at the 2009 NABS meeting in Grand Rapids, but I'm afraid I wasn't much help.  The difference in the body whorl was more striking to my eye than the W:L ratio, but both shell types seemed within the normal range of variation one sees in populations called L. palustris in Europe or L. elodes here.  I suggested breeding studies, which in retrospect wasn't very practical advice.

So Kip decided to try a simple common garden experiment, carrying pure populations through multiple generations in a uniform environment.  He collected four populations of dark, marsh-dwelling lymnaeids from northwestern Pennsylvania differing in their W:L ratios, divided them into twelve 300-gallon cattle tanks, cultured them for three years, and re-examined the second generation born in the tanks.  While three of Kip's populations converged on a uniform shell morphology (Conley, Osgood, and Killbuck), the robust V2 population from Hartstown Marsh remained distinct (Below, 4). 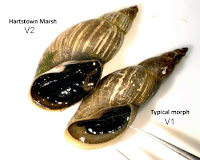 Let's recap, shall we?  Had we asked Frank Collins Baker back in 1911 to estimate the number of stagnicoline species in North American waters, he would have suggested about 14 dark, skinny marsh-dwellers and 25 pale, fat river & lake dwellers.  But in 1951 Hubendick lumped all our dark/skinny marsh-dwellers under the European nomen L. palustris, and our pale/fat lake-dwellers under L. catascopium, with L. emarginata as a question mark (5).  Then in 1959, Maria Jackiewicz distinguished as many as five cryptic species under European L. palustris on anatomical grounds, one of which she described as L. occulta.  The range of that species (under the name L. terebra) has recently been shown to extend across the top of Europe and Asia to the Bering Land bridge.  And recent DNA sequence data reflect striking genetic similarity between an individual L. occulta/terebra sampled from Poland and individual L. elodes, L. emarginata, and L. catascopium sampled from Montana, Michigan, and Ontario (6).

Now comes the news that at least two cryptic species of dark/skinny marsh-dwelling stagnicolines are lurking in the marshes of Northwestern Pennsylvania.  Maybe this isn't news at all?  Maybe this is exactly what we should have expected had research in America kept pace with research in Europe?  Might one of Andy and Kip's varieties be L. palustris, as Hubendick suggested 60 years ago, and the other L. occulta/terebra?  If that's true, there must be twenty names here in North America, including elodes, catascopium and emarginata, that would have priority over the European nomina occulta and terebra.

So maybe F. C. Baker was right about the diversity of our stagnicoline fauna way back in 1911, and we should never have looked to Europe at all?  No, I don't think so.

At left is a detail from Plate XXVI of Baker's 1911 monograph, showing shells he labeled "Galba palustris."  The similarity between this image and the photo above is striking, isn't it?  If you click the image you can see Baker's entire plate (7), showing shells from six populations of nominal G. palustris, numbered 17 - 37.  While most of the 21 shells depicted look like robust-V2 individuals, to my eye figures 17, 22, 23, 29, 33 and 35 appear to show typical-V1.  And figures 20, 26 and 34 are getting very close to L. catascopium, aren't they?  Many of Baker's other stagnicoline plates look similarly mixed, to my eye, including his plate XXXIV of "Galba" elodes.

Thumbing through the 162 pages of text and 18 plates that F. C. Baker dedicated to his 39 nominal species of stagnicolines, I just don't think we here in North America have ever caught a clue about the lymnaeid fauna that covers half our continent.

So now it's the 21st century.  Might modern DNA sequence data cast some light on this question?  Tune in next time...

(2) This montage made from photos kindly provided by Dr. Andy Turner.

(3) Statistical inference on ratios like this is real funky.  I understand that Andy & Kip are planning to re-run their analyses using ANCOVA.

(4) This image courtesy of Kip Brady.

(5) The Classification of the Lymnaeidae [28Dec06]