The headline news at the AMS meeting in Pittsburgh late last month was the rediscovery of two populations of the rare limpet genus Rhodacmea, together with a reawakening of our collective consciousness regarding this peculiar element of the North American freshwater gastropod fauna. A formal report by Diarmaid O’Foighil and his collaborators in Michigan, Alabama, and Kentucky was published on May 31 in PLos One (1).

In recent years we have often taken note of the excellent research on ancylid limpets issuing from our good friends in Ann Arbor: Diarmaid, Taehwan Lee, Jack Burch, and (until recently) Andrea Walther. Faithful readers will remember the columns we posted in 2007 and 2010 regarding their work on Laevapex and Ferrissia, respectively (2). And just as was the case with those latter genera, the best way to put the new Rhodacmea results into perspective is to back up to the 1963 monograph of another worker with Ann Arbor roots, Paul Basch (3).

Rhodacmea is the most distinctive of the North American ancylids, bearing a shell Basch described as “strangely indented” and a “peculiar” radula with heavy inner cusps as well as the usual (more delicate) outer ones. Basch asserted, “The genus in North America undoubtedly represents a branch of the basic Ancylus stock, related to European Ancylus fluviatilis,” a hypothesis that modern molecular data seem to bear out. He recognized three species: R. filosa (tall, ribby and thin - Basch's figure above), R. eliator (tall, smooth and robust - Basch's figure below), and R. hinkleyi (with a lower apex, not important for our story here). The historic ranges reviewed by Basch centered all three species in big rivers of the Alabama and Tennessee systems, although eliator was originally described from the Green River of Kentucky.


“The genus is undoubtedly approaching extinction as more and more fast-flowing, larger streams and rivers in the southeastern United States are rendered unsuitable as habitats by dams and pollution… I have collected in dozens of streams in these areas and have located living Rhodacmea only in the Cahaba River near Helena, Alabama.”

Seen in that light, the biggest news from Pittsburgh may have been the rediscovery of viable populations of Rhodacmea in Choccolocco Creek (a Coosa tributary about 100 km east of the Cahaba) by our colleague Paul Johnson, and in the Green River by our colleague Ryan Evans. These are valuable biodiversity resources, and well worthy of conservation.

The glad tidings have been somewhat tarnished, however, by their scientific treatment at the hands of our colleagues in Ann Arbor, which (I fear) expose the rather shabby undergarments of the harlequin we conservation biologists too often seem to play. For both in their AMS presentation this past month, and in their recently published paper, O’Foighil and his colleagues assert that all three of their Rhodacmea populations “merit specific status” separately.

Of course, historically all the freshwater limpet species have been recognized entirely by shell morphological criteria. On that basis, Basch identified the Cahaba population as R. eliator. And Anthony’s (1855) type locality for R. eliator was the Green River of Kentucky. That is why, as I understand it, a directed search was undertaken there. And the formal morphometric study published by O’Foighil and colleagues returned no significant difference between the Cahaba and Green River eliator populations.

The level of CO1 sequence divergence between Cahaba and Green is also small, when compared to values these same researchers have obtained among conspecific populations of Ferrissia and Laevapex. Judging from the scale bar on their CO1 gene tree (click for larger) the O’Foighil group found perhaps 5-6% sequence divergence among all haplotypes sampled from all three Rhodacmea populations – Cahaba, Green, and Choccolocco. Compare this to the divergence shown among Laevapex fuscus haplotypes – easily in the 10 - 13% range. So given both negligible morphological difference and negligible sequence divergence (5) between the Cahaba and Green River Rhodacmea populations, how can our colleagues assert that they represent different species? 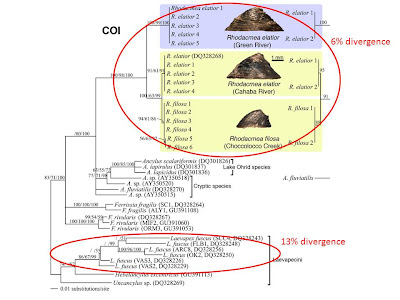 The reasoning offered by O’Foighil et al. to support their three-species hypothesis pirouettes about the Choccolocco population, individuals from which apparently bear sufficient ribs on their shells to support their identification as R. filosa. Our colleagues seem deeply invested in the proposition that this population cannot be conspecific with the previously-known Cahaba population, issuing press releases trumpeting their rediscovery of a unique species in Choccolocco Creek believed extinct for 60 years (6). So since Choccolocco must be a different species from Cahaba (at less than 1% sequence divergence!), the Green population (at 6% divergence) must represent a third.

They further reason that the Green River population must be the true eliator (since that is the type locality) and Cahaba must be a cryptic species Basch did not recognize. The old name cahawbensis seems conveniently available for rescue from synonymy.

But regarding the plasticity of shell characters in freshwater limpets, I can do no better than quote our Ann Arbor colleagues themselves (7): “Shell shape and sculptural features … are unreliable phylogenetic indicators, and they presumably (8) encompass a large ecophenotypic component.” I will also note that the morphometric analysis around which this entire commedia dell' arte turns included just N=2 bona fide individuals from Choccolocco, combined with N=6 museum specimens from a fourth (extinct) population of the author’s own choosing. And does crediting shell characters when they split Choccolocco and Cahaba, but discounting them when they lump Cahaba and Green, seem a trifle disingenuous to anybody else?

Perhaps there is some more profound reason that our colleagues have recognized three species of Rhodacmea, where they have seen only single species in Laevapex and Ferrissia, given similar evidence? A cynic would note that it is easier to get funding for three endangered species than one. But knowing our colleagues as I do, I feel sure that their motivation was the finest – to maximize the likelihood that these populations, by whatever names they may be called, will be conserved into the future. Their ends do not, however, justify their means.

(4) Although there are 1978 collections of R. filosa from Choccolocco Creek in the Florida Museum of Natural History.

(5) I will resist the temptation to preach my "gene trees are not species trees" sermon here. But sinners should prayerfully consider my post of [15July08].

(6) The news seems to have been picked up by Science Daily in early June, and spread to a variety of web-based outlets serving the conservation community, such as terradaily.com, redorbit.com, and batangastoday.com. The headlines in all cases are to the effect that a "Snail Long Thought Extinct Isn't." The Green River population is not mentioned in any of these secondary reports.

(8) Presumption is not necessary here. I reviewed our common garden experiments with ancylid limpets in my post entitled, “Just One Species of Ferrissia.” [10June09]
Posted by Rob Dillon at 10:45 AM No comments: