Editor’s Note: This is the fourth and final installment of a series on isolation by distance and barriers to dispersal within populations of pleurocerid snails.  The original research upon which this essay was based was published in Ellipsaria v22(2) [pdf], if you’re looking for something citable.

The modern era of American malacology dawned in 1934, on page 8 of the University of Michigan Museum of Zoology Miscellaneous Publication #286 [1].  For it was there that Calvin Goodrich first advanced his model of shell variation in the Lithasia geniculata population of the Duck River in Middle Tennessee.  Goodrich argued that that pleurocerid populations previously identified as Anculosa pinguis, Lithasia fuliginosa, and Lithasia geniculata were all variants in a 270 mile cline, lowering the first two nomina to subspecific status under the third.

This was not taxonomic bit-fiddling.  It was a throwing off of typological thinking, and an anticipation of the biological species concept eight years before Mayr hove it like Simba before the African host [2].  We first featured Goodrich’s model for the Duck River Lithasia on this blog way back in February of 2007, and have returned to it twice since then, in July of 2014 and September of 2019 [3]. 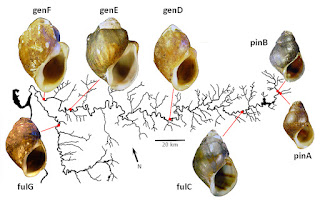 So when I opened an email from Paul Johnson in the summer of 2002, offering to ship me an extensive series of Lithasia samples collected down the length of the Duck, frozen and ready for allozyme electrophoresis, I jumped at the chance.  Paul was working with our good friend Steve Ahlstedt and a host of collaborators on a survey of the unionid mussel fauna of the Duck [4] and had sampled Lithasia as an ancillary.  This seemed like a marvelous opportunity to generalize some of the observations I had made on intrapopulation genetic variation in Pleurocera proxima during my dissertation years [5] and add a dramatic shell morphological component as well.

And I went straight to work, initially screening for allozyme variance at 17 loci, finding three polymorphic: Octopine dehydrogenase (Odh, 2 alleles), Mannose-phosphate isomerase (Mpi, 3 alleles) and Hexanol dehydrogenase (Hexdh, 2 alleles).  For those three loci, I cranked up the sample size to around 30 – 40 individuals for each of the 7 subpopulations.

The graph below shows the frequency of the most common allele [9] at the three polymorphic loci as a function of Duck River mile.  The similarity between this graph and the graph of Odh frequency in the P. proxima population of Naked Creek [12Oct21] is striking, both data sets showing a dramatic swing in allele frequencies between their most upstream sample sites. 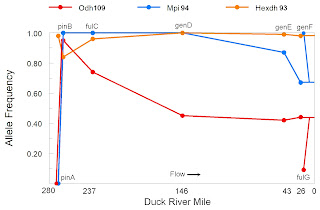 In Pleurocera proxima, this phenomenon was attributable to a barrier to gene flow at a corrugated metal pipe.  In Lithasia geniculata, the exactly analogous phenomenon is attributable to the falls of the Duck River – a bit more dramatic, but no Niagara.  The main Duck River and the Little Duck River drop over several named waterfalls in Old Fort State Park west of Manchester.  Judging from Paul’s collection data, the barrier between pinA and pinB may be Step Falls, a pretty little 30 ft drop, figured below.  That’s one small step for Man, one giant leap for Snail-kind.

Gene frequency variance was also significant down the remainder of the Duck River at the sample sizes tested, although less dramatic.  Subpopulations pinB, fulC and genD differed from each other at the Odh locus, while genD, genE and genF differed from each other at the Mpi locus.  Buffalo River subpopulation fulG differed significantly from genF at both Odh and Mpi [11].  Differences of these magnitudes seem attributable to isolation by distance, rather than any discrete barrier to dispersal.

But it was shell morphological variation that attracted us to the Lithasia geniculata population of the Duck River, and it is with shell morphological variation that we will conclude.  No keen-eyed 19th-century taxonomist has ever assigned different Latin nomina to the Lithasia above and below the falls of the Duck River.  The shells born by subpopulations pinA and pinB are indistinguishable, despite the fact that gene flow from the latter to the former is apparently negligible.

Taxonomists have, however, fallen over themselves racing to describe new species of Lithasia down the remainder of the Duck River, even though gene flow among the subpopulations inhabiting its lower 270 miles is apparently greater.  Such observations are consistent with the hypothesis that much of the shell morphological variation observed in the Lithasia geniculata population of the Duck River is ecophenotypic in origin.

It was the work of Calvin Goodrich that inspired me back in 2007 to propose the phenomenon ultimately re-christened CPP, cryptic phenotypic plasticity [12]. I never insisted that CPP must have its origins in the non-genetic components of shell morphological variance but results such those as I published in 2011, 2013 and 2014 have certainly pointed in that direction.  The Lithasia geniculata population of the Duck River does, too.

[3] I have explicitly featured Goodrich’s model for the Duck River Lithasia geniculata in three previous essays. The influence of that seminal work has been papable in many more:

See my 2007 essay for the L. geniculata detail of Goodrich’s Plate I, and my 2014 essay for a scan of the entire plate.

[5] My research project on gene flow in the Naked Creek population of Pleurocera proxima was ultimately published in three different ways.  The 1979 results, in their entirety, were published as Chapter 2 of my 1982 dissertation [6].  The barrier-to-dispersal portion of that 1979 study was combined with data from 1980 and 1985 and published in 1988 [7].  The isolation-by-distance portion of my 1979 study was published just last year in Ellipsaria [8].  For an overview of the entire research program, see:

[9] Weighted average over all seven sites.

[11] The Buffalo River Lithasia population has been described as a unique species.  Allozyme data do not support that hypothesis, however.  See:

[12] “Cryptic phenotypic plasticity” is defined as “interpopulation morphological variance so extreme as to prompt an (erroneous) hypothesis of speciation.”  For more, see: