Freshwater gastropods take to the air, 1991

Thirty years ago, when I signed my contract with Cambridge University Press to deliver the book that ultimately became The Ecology of Freshwater Molluscs [1] I had a larger project in mind.  The original title of the book was to have been, The Evolutionary Ecology of Freshwater Mollusca, and I planned to cover population genetics all the way up to speciation, as well as life history, competition, predation, communities, and the more traditionally ecological topics.  That was too much.

But before I realized that I had bitten off more than I could chew, I spent the summer of 1991 working on a chapter about freshwater mollusk gene flow.  It included subsections on straight-ahead crawling, drift, and “phoresy” under which I lumped all the cases where mollusks are carried passively by anything, including fish carrying the glochidia of freshwater mussels.  I even covered human-mediated invasions in that chapter, or at least tried.  Way, way too much!

I never submitted my gene flow chapter for publication.  But I rediscovered a hard copy again as I was moving out of my old office this past August, together with a bunch of raw data and tables and figures, and analyses on tractor-feed printer paper, and it re-awakened a dormant interest [2], and gave it a fresh slant.  How much has science advanced in 25 years?  The quick answer is that in some areas, progress has been Yuuuuge!  But in other areas, not so much. 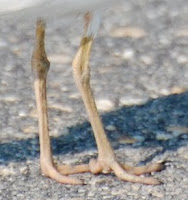 So for the next couple months we’ll focus on dispersal in freshwater gastropods.  Any study of which, in 1991 or in the present day, might well begin with the charming 1965 “presidential address” offered by W. J. Rees, “The aerial dispersal of Mollusca” [3].  Rees accumulated dozens of published references, notes, stories and anecdotes about both bivalves and gastropods, both terrestrial and aquatic, both pinched onto the feet and riding upon the shoulders of birds, bugs and bats, and even occasionally sucked up in cyclones and spat out on the bowlers of unsuspecting Englishmen.

Rees collected 10 reports of freshwater limpets on aquatic insects, and I found two additional cases published between 1965 and 1991 – van Regteren Altena (1968) reporting 6 ancylids on the elytra of an aquatic beetle in Surinam, and Rosewater (1970) reporting 2 Laevapex taken from the elytra of a dytiscid beetle captured in a Florida light trap [4].  Does that total surprise you as much as it surprises me?  Even I, who have devoted my entire professional life to malacology, think of freshwater limpets as among the most obscure of all God’s creatures.  They’re just tiny little brown bumps, for Heaven sake!  Would you have guessed 12 published reports of freshwater limpets on flying water bugs?  That’s probably more than the total number of papers published on all other aspects of ancylid biology in North America combined.

The overland dispersal of non-limpet families of freshwater gastropods seems to be significantly less common.  Rees conveyed the report of a single Australian worker, who on different occasions found 6 species of snails on the feet of ducks.  I caught one more – the report of Roscoe (1955) of juvenile Physa, Lymnaea, and Helisoma on the feathers of a white ibis collected in Utah [5].

The review of Rees was followed by a couple really cute experimental papers published between 1965 and 1991 – those of Boag [6] on floating feathers and Malone [7] on severed killdeer feet.

Malone simply shot a killdeer, mounted its legs on a pair of props, and moved them through shallow water where the birds had been observed feeding.  He inspected the legs frequently, never allowing them to remain stationary for more than three minutes.  Two resident snails, Lymnaea humilis (“obrussa”) and Promenetus exacuous [8] often attached passively, drawn by the surface film or dislodged from vegetation as the feet moved through.  Although adult Lymnaea clung no more than five minutes if the feet moved, Promenetus and juvenile Lymnaea remained attached indefinitely.  All snails fell off when re-immersed in water.  Malone reported that L. humilis could survive 2 – 14 hours out of water, and Promenetus 5 – 14 hours, although admittedly not in conditions designed to duplicate flight.

Malone also reported that mature Lymnaea attached to the feathers of a (presumably footless) killdeer body left floating in shallow water for only three minutes.  Continuing along these lines, Boag [6] reared populations of Lymnaea stagnalis, L. elodes, and Helisoma trivolvis from eggs to age three months, periodically floating a feather in each culture pail.  Feathers with adhering snails were removed and placed in an air jet simulating flight speed for up to 15 minutes.  He record the sizes of the snails attached, their detachment rates, and their subsequent viability.  All of the (many) hundred snails found attached to feathers were in the 1 – 3 mm size range.  Although Boag did not monitor the size distributions of the base populations, it seems certain that the volunteer aviators tended to be significantly smaller, especially as the months of his experiment advanced.  The figure below shows his results combined over the duration of the experiment for the population with the largest data set, L. elodes.

Although riding on a feather must at best be only a rough approximation of riding on a bird, it is safe to conclude that either experience is quite rigorous.  Factoring both attachment and survivorship together, Boag’s data show that 56% of the L. elodes would arrive viable after 1 minute of flight, 17% after 5 minutes, 16% after 10 minutes, and only 4% after 15 minutes.  Figures were comparable for L. stagnalis and suggested an even lower probability of successful colonization for H. trivolvis.
Three points emerge from the consideration of Malone’s data together with those of Boag.  First, it is clear that the attachment of snails to birds is the easy part, although perhaps only the smallest are likely to hold on.  And survivorship of these (typically small) individuals riding on birds is probably nowhere near the hours suggested by Malone, but more like minutes.  But finally, since the absolute frequency at which snails become attached to birds may be surprisingly high, even a 4% survival rate may be sufficient to render aerial dispersal a significant factor in initial colonization and subsequent gene flow among populations of freshwater snails.

In 1991 I also reviewed a second set of experiments published by Malone [9] assessing the likelihood of freshwater gastropod dispersal via gut transport.  It’s not great.  Malone fed caged ducks large volumes of aquatic vegetation, to which were attached the adults, juveniles, and egg masses of Physa and Helisoma.  Although he did not offer an estimate of the number of individual snails ingested, one can indirectly infer that this was surely in the thousands.  While no adults or juveniles were identified in the feces, Malone recovered 9 viable Physa embryos.  He also tried feeding about 500 – 1000 Physa egg masses and 200 – 400 Helisoma egg masses to killdeer, collecting feces in aerated water.  A total of 17 viable embryos were recovered.

Almost all of the material above was extracted from my 1991 chapter on dispersal.  So what progress have we made in studies on the aerial dispersal of freshwater gastropods since?  A fair amount, actually.  Tune in next month!

[2] This is the second essay I have posted on the subject of aerial dispersal in freshwater gastropods, the first coming way back in November of 2005.  I also invoked a gene flow mechanism I termed the “sticky bird express” just this past April.  See:
[3] W. J. Rees (1965) The aerial dispersal of Mollusca.  Proc. Malac. Soc. Lond. 36: 269-282.

[8] I’m a bit skeptical of this identification.  Perhaps Promenetus is significantly more common in NW Montana, where Malone conducted his research, than anyplace I have any personal observations.  But my guess would be Gyraulus parvus, not P. exacuous.

Posted by Rob Dillon at 9:27 AM No comments: