Georgia is just Florida, one state north and 65 million years back. During the Cretaceous Period, most of the land mass that constitutes the present Mobile Basin of Alabama would have been obscured by a shallow sea and the occasional shadow of a passing mosasaur. The exception would have been a peninsula in what is today North Georgia (1).

Atlanta sits in the middle of that Cretaceous peninsula, General Sherman notwithstanding (2). The low hills to its east drain through the Ocmulgee/Oconee/Altamaha to the Atlantic. The Chattahoochee River runs through the middle of the city, under the I-285 beltway and southwest to the Gulf. To its immediate north lie tributaries of the Alabama/Coosa, draining into the Mobile Basin. And just a bit further north, the waters of the Tennessee River flow into the Mississippi (below, 3). 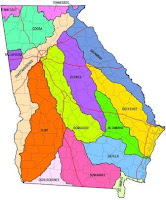 An appreciation of the complex drainage patterns of north Georgia will be important for an understanding of the hypotheses I am preparing to advance in this essay. If you are planning an earnest attempt to follow me, you will need to hold in your mind that the Coosa River is formed at the Georgia/Alabama line by the junction of two major tributaries, the (more northern) Conasauga/ Coosawattee/ Oostanaula and the (more southern) Etowah (4). And I do apologize for the drainage taxonomy. Subsequent to the departure of the mosasaurs, but prior to the arrival of Sherman, this part of the world was infested with dozens of Indian tribes, vying among one another in the unpronouncability of their names. After extinguishing each tribe, the European settlers named a local river in its honor, apparently careless of how, or even whether, any of these rivers might ultimately interconnect.

In any case, the diversity of the Goniobasis fauna of the Alabama/Coosa river system might aptly be described as "legendary." Goodrich (1936) recognized 24 species in the main river itself, and subsequently (1941) added about 11 species from "small streams." His final (1944) tally for the entire fauna of the Coosa River system listed, from rivers of all size, 29 species of Goniobasis, many with subspecies (5).

As patient and perceptive readers of this series of essays may have by now gathered, I myself have relatively little field experience anywhere in the Mobile Basin. What insight I have gathered regarding the pleurocerid fauna of the Oostanaula side of the Coosa has developed as a consequence of my work in east Tennessee on Goniobasis clavaeformis / Pleurocera unciale, as featured in last month’s (6) “Mobile Basin III.” When first I crossed the low hills that separate the Hiwassee system of the Tennessee River from the Mobile Basin in North Georgia, and peeked tentatively into the famously diverse waters of the Oostanaula subdrainage, I was shocked by the sight that met my eyes. WTF?!

This was the same pleurocerid fauna I had just spent the previous week sampling in Tennessee. In Cohulla Creek, one of the main tributaries of the Conasauga/Oostanaula east of Dalton, I recognized three old friends: Goniobasis simplex, G. troostiana (or "arachnoidea"), and G. clavaeformis – the same species widespread from southwest Virginia down the width of east Tennessee. The only difference was that clavaeformis was now called vestita, arachnoidea was now called striatula, and simplex was now called, well, I don't know (7). And the allozyme data I have subsequently collected seem to show that I was correct.

But it had happened before. My first “WTF moment” in the upper Mobile Basin actually occurred in the mid-1990s, kneeling beside the Etowah River. On that occasion I had been sampling west from the Atlantic drainages of central Georgia, crossed the broken Piedmont north of Atlanta, and found essentially the same G. catenaria I’d I had spent most of my professional career chasing through southern Virginia and the Carolinas, now re-named “Goniobasis caelatura” in the Etowah. And the DNA sequence data I have subsequently gathered with the help of my colleague John Robinson again seem to show that this impression was correct (8).

So we’ve now reached the point of a hypothesis – not just for this essay, but for all IV essays in this series. The endemicity of the Mobile Basin pleurocerid fauna has historically been much overstated. As the Cretaceous seas receded, the pleurocerid faunas that colonized the Mobile Basin were a mixture of the Atlantic (older) elements and the Tennessee (younger) elements, both previously inhabiting a peninsula in north Georgia. These faunas can still be seen today in the two major tributaries of the Coosa – the southern Etowah and the northern Oostanaula.

But don’t misunderstand me. There are bona fide endemic species of pleurocerid gastropods in the Mobile Basin. Dykes Creek is a lovely little stream running directly into the main Etowah River very near its junction with the Oostanaula. It is inhabited by (at least) three species: a G. clavaeformis-type from the Tennessee side (A), a chunky G. catenaria from the Atlantic side (B), and a species I'm going to call "WTF3" (C). Allozyme data show WTF3 to be genetically similar to G. catenaria, but reproductively isolated from it. My best guess is that Goodrich would have identified WTF3 as the subspecies Goniobasis caelatura sternsiana (Call 1886). But if so, that's the second of his caelatura "subspecies" that needs to be raised back up to the full species level (9). I am quite sure, in any case, that WTF3 is endemic to the Mobile Basin. And perhaps very rare. 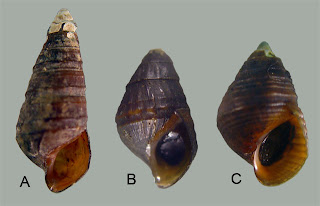 So to summarize. In late June the US Fish and Wildlife service proposed endangered status for two Mobile Basin pleurocerids species, "Leptoxis foremani" and "Pleurocera foremani" (Essay I, 24Aug 09 - see note 10). The former nominal species is likely a local population of L. picta, which is not protected in any way (Essay II, 15Sept - see note 11). The latter nominal species is likely a local ecophenotypic variant of the most widespread pleurocerid in the American southeast (Essay III, 12Oct - see note 6). Meanwhile genuinely endemic and probably rare species go entirely unrecognized by anybody.

Science and public policy are two entirely different things. What I have been demonstrating over this four part series is science - the construction of testable hypotheses about the natural world. This process, this vocabulary, this way of looking at the world, is entirely different from the process that brought the US Fish & Wildlife Service to propose its endangered species regulations in the 29Jun09 Federal Register. These two ways of looking at the world are not compatible, nor are they incompatible. FWS biologists play baseball, I play the banjo. Neither is better, neither is worse.

I am not suggesting that the FWS drop "Leptoxis foremani" and "Pleurocera foremani" like a pair of old girlfriends and drive Dad's Chrysler up to Dykes Creek with flowers and bonbons to court G. stearnsiana, or whatever TF it is. Everything I've offered in this essay is a hypothesis (12), and may change tomorrow. What I am suggesting is that if it is the genuine Will of the People that public resources be expended on science (13), all government agencies involved (regardless of mission) must support what has heretofore been marginalized as "basic research," such as that which produced the hypotheses I have advanced above, which is, after all, the only real Science there is. In other words - send me money, and leave me TF alone.

(1) The best treatment of this subject I've been able to find on the web is at NOAA, interestingly: Beach Nourishment, A Guide for Local Government Officials

(3) I've stolen this map from the "Southeast Watershed Assistance Network."

(4) And here's the map of the Mobile Basin drainage system that I stole for Essay I in this series. You might want to open it in a new window.

(7) This is actually one of the biggest mysteries in my mind regarding the Goniobasis of the Alabama/Coosa. What did Goodrich (and everybody else who has ever sloshed through these rivers) call plain old, ordinary, vanilla, dirt-common Goniobasis simplex? I can't match it to a synonym on anybody's list, over 150 years of surveys. Has it been missed?

(9) In the mid-1990s I also recognized Goniobasis georgiana in the Etowah, another older-Appalachian species ranging through the upper tributaries of the Hiwassee in the North Carolina mountains. Goodrich lowered this nomen to subspecific rank as "G. caelatura georgiana," but its co-occurrence in the Etowah with what (I suppose) he would have identified as G. caelatura caelatura, absent any evidence of hybridization, suggests strongly that G. georgiana is a distinct species.