A Remarkable Convergence of Goo, Or, The Perils of a Jpeg Naturalist

Editor’s Note.  This is the third in (what turned out to be) a series of four essays on the egg masses of freshwater pulmonate snails.  It will only make sense if you read my post of 17Oct14 first, and it would help to at least skim my post of 26Sept14 as well.  Most of what is written below turned out to be wrong.  So please do continue on to my essay of 8Jan15 for the denouement!

In the first episode of our saga, we met Mr. Tom Pelletier, the hardworking proprietor of askanaturalist.com.  It was a jpeg attachment that Mr. Pelletier sent me in the spring of 2014, as well as other correspondence I have enjoyed on the general subject of gelatinous blobs in recent years, that prompted me to post my review of pulmonate egg and egg mass morphology in September [1].  So I was not surprised to receive a second email from Mr. Pelletier this past August, with the subject line, “Another question about snail eggs.”

Mr. Pelletier wrote that he had recently received emails from two different readers bearing very similar attached jpegs depicting what might be snail egg masses, one from Nova Scotia and the second from Maine.  Here is what the Nova Scotia correspondent said: 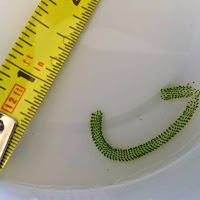 “We are finding these slimy strings of bright green eggs (?) in the lake. They can be found on the wharf poles but the ones in the picture were on the cord for the underwater thermometer. Any idea what they are from?”

And Mr. Pellatier’s correspondent from Maine wrote as follows:  “I found this jelly blob or loop (below) in the water on the ladder to my boat. I thought it was a round blob but it was more of a loop. These dots were bright green in clear jelly.” 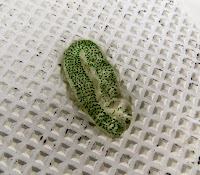 Well, thought I to myself, I can knock this ball out of the park!  These attached jpegs quite clearly depict the egg masses of Lymnaea (Bulimnea) megasoma, to which I devoted my entire essay of 17Oct14 [2].  They demonstrate exactly the same (very distinctive!) morphology, and have been collected from exactly the same habitat type, in exactly the same (chilly) range.  I congratulated myself that I might be the only person in the world who could, with any confidence, identify these peculiar blobs of goo as freshwater gastropod eggs with any authority.

But being the conscientious and thorough worker that he is, Mr. Pelletier had also sent similar inquiries to a herpetologist, an algae expert, and (cleverly) a researcher with expertise in chironomid midges.  And the next day, Mr. Pelletier reported to me that his chironomid guy “seemed pretty sure” that the peculiar blobs of goo in question were the egg masses of his favorite critter, not ours.

A chironomid midge, are you nuts?  I am not an entomologist, but I have waded through enough clouds of chironomids in my day to know that they are tiny little delicate things, maybe 6 – 8 mm in body length.  How could a 6-8 mm fly lay a 6-8 cm egg mass?

Well, in all candor, I had to confess to Mr. Pelletier that I had never actually laid eyes on an egg mass of Lymnaea megasoma either, nor do I have any significant field experience in lakes at any such northern latitudes, and that everything I think I might know about this entire category of question comes from second-hand reports and jpeg attachments.  So in the end, I concurred with the “chironomid guy” (some of whose correspondence Mr. Pelletier had shared) that somebody, somewhere, ought to hatch these things out.

So the results of the experiment came back in September, and my embarrassment was complete: 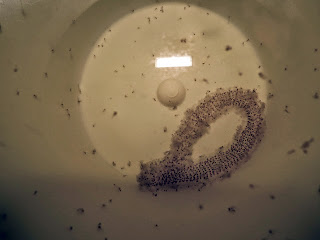 Although it may be difficult to identify that cloud of blurry specks emerging from the mysterious blob of goo depicted in the jpeg above, I am personally convinced that they are not hatchling Lymnaea megasoma.  The egg mass of a chironomid midge it would seem to be.

In retrospect, questions of scale have continued to dog me in my long running record of folly and failure as a jpeg naturalist.  When I opened Mr. Pelletier’s August email, I had in mind a 15 cm egg mass such as depicted in last month’s essay.  But the “slimy string of bright green eggs” depicted at the top of this essay is probably no more than about 4 cm long, and a much smaller diameter as well.  And since (it seems to me) both last month’s egg masses and this month’s masses seem to contain about the same number of embryos, I think this month’s embryos may be much smaller as well.  Had the two egg masses been sitting in watch glasses on my bench top, I don’t think I would have been confused.

So have two completely independent elements of the freshwater macrobenthic fauna of the higher latitudes of North America, an insect and a gastropod, independently evolved nearly identical egg mass morphology?  And has the same green algae evolved a symbiotic relationship with both?  Could biology be any more fascinating?

Well yes, it could!  In late August our good buddy Tom Pelletier also called my attention to a 1994 paper in the Journal of Experimental Biology on oxygen transport in amphibian egg masses [3].  The amphibian researchers reported that the eggs of both wood frogs and spotted salamanders up in Nova Scotia are “cohabited by Oophila ambystomatis, a green alga found specifically in association with amphibian egg masses.”  They reviewed a large and hoary literature (going back to 1888!) suggesting that such symbiotic algae may benefit from increased ammonia or CO2 concentrations inside the amphibian egg capsules, and confirmed that, under some conditions, O2 produced by the algae seems to be required for the development of the amphibian embryos.

So the same striking egg mass adaptation may have evolved not twice, but three times independently – bug, snail, and amphibian – all three adaptations depending on the same algal symbiosis.

The sentence above looks like a conclusion, but it is not.  There is yet one more episode in this saga, and it does not end neatly.  Rather, episode #4 will make you question some not insubstantial fraction of what you have read in episodes #2 and #3.  Stay tuned!