We are pleased to announce that a new web-based resource, the Freshwater Gastropods of Mid-Atlantic States by R. T. Dillon, M. A. Ashton, and T. P. Smith, is now available from the FWGNAwebsite.  Hit the big FWGNA logo at right, and click the Mid-Atlantic region for a tour!

This is the sixth region to be added to the FWGNA site since its debut in 2003, extending our coverage from Georgia to the New York line, raising the total species reviewed from 79 to 87. 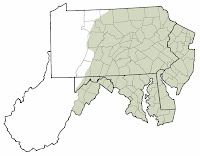 The new Mid-Atlantic site covers Delaware, Maryland, New Jersey, eastern Pennsylvania and the West Virginia panhandle.  Our database of 2,893 freshwater gastropod records was developed from the collections of the US National Museum, the Academy of Natural Sciences of Drexel University, the Carnegie Museum of Natural History, and the Delaware Museum of Natural History, the macrobenthic surveys of the Maryland DNR (Annapolis), the Pennsylvania DEP (Harrisburg), and the Delaware DNREC (Dover), and our own original fieldwork.  The new website features a dichotomous key and a photo gallery for all 41 species recovered from the five-state area, as well as range maps and notes regarding their ecology, life history, taxonomy and systematics.

Also new for 2013 is a page entitled “Synthesis,” which can be visited directly here:
In this analysis we combine our 2,893 Mid-Atlantic records with 8,568 data from Virginia, North Carolina, South Carolina and Georgia to generate a distribution of commonness and rarity over the entire 67-species Atlantic drainage freshwater gastropod fauna.   We suggest a new (nonparametric) system of “incidence ranks” as a supplement to, if not necessarily a replacement for, the subjective system of “conservation status ranks” currently in vogue with natural resource agencies [1].

All reference to conservation as a motivation or intent has now been removed from the FWGNA website, insofar as possible.  Henceforth the Freshwater Gastropods of North America project will restrict itself to science.

[1]  This is an expansion and refinement of the approach I first suggested for the 57 species of freshwater gastropods in: