I first met Dr. Cynthia G. Norton in 2005, at the AMS meeting in Asilomar, California.  And I was immediately impressed by her warmth, by her outgoing personality, and by the rigor of her scientific inquiry, which in my long experience, is a rare combination.  She was interested in the same sorts of research questions in Helisoma that Amy Wethington and I were working upon at that time in Physa: mating behavior, sex allocation, and the reproductive biology of simultaneous hermaphrodites generally.  And we have corresponded regularly ever since, cataloguing the similarities in our research findings we have uncovered over the years, which are many, as you might expect.  The most important differences are that Helisoma mate reciprocally, face-to-face, while Physa mate unilaterally, male on top of female, after which swapping may occur.  And quite unusually for basommatophoran pulmonates, Helisoma rarely seem to self-fertilize [1].

In 2009 I lured Cindy into a collaboration with me involving the European Planorbarius corneus, an unpublishable disaster that yielded the sum total of one post on the FWGNA Blog [2].  But I love the quote that Cindy has always used to close her emails, even unto the present day: "You will do foolish things, but do them with enthusiasm - Colette [3]." 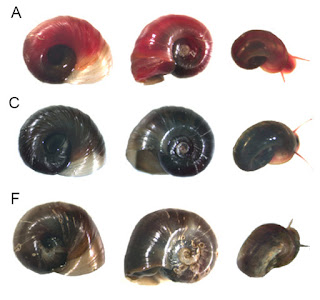 So in May of 2018 the mailman came knocking on my door with Volume 36(1) of the American Malacological Bulletin.  I was aware that Cindy had been working with an albino strain of Helisoma trivolvis for several years at that point.  So, I was not surprised to find her note confirming that albinism is inherited simple Mendelian recessive [4].  I think that has pretty much turned out to be true throughout the animal kingdom.  Amy and I had documented two non-complimenting albino loci in Physa back in 1992, which we used as a tool for all manner of interesting studies of reproductive biology [5].

Albino planorbids are much more spectacular than albino physids, however.  Planorbids have re-evolved hemoglobin as a respiratory molecule, and when albinism blocks their normal production of melanin, their bodies are rendered startlingly red [6].  Red-colored planorbids, universally marketed as “ramshorn” snails, may be the most commonly encountered aquarium snail in the world, that somebody actually wants to be in there [7].

The peculiar thing is this.  Nobody seems to know what that those commercially-available “ramshorn” snails actually are, or where they might have come from [8].  The most common speculation is that they are Floridian Helisoma duryi, although H. trivolvis is sometimes mentioned in this regard, and Asian Indoplanorbis exustus, and even European Planorbarius corneus.  And indeed, even the relationship between the two American species, H. duryi and H. trivolvis, has simply never been clear.

So the seed of an idea began to germinate.  Might Cindy Norton be lured into another foolish collaboration with yours truly?  In June I wrote her to propose a set of breeding experiments with the two sister Helisoma species, and in light of her motto, I should not have been surprised that she replied affirmatively, with enthusiasm.  Cindy and I roughed out an experimental design involving three lines: her albino H. trivolvis, a stock of Helisoma duryi that I would supply from Florida, and a control (pigmented) stock of H. trivolvis from Charleston [9].  And now you know what, exactly, I was doing dodging airboats in The Everglades in late October of 2018 [10].

Like most animals with internal fertilization, pulmonate snails can store sperm for a long time – probably their entire lives [11].  Most of the Helisoma I sent to Cindy from Florida in October of 2018 were juveniles and might not be inseminated, I suppose.  But the pigmented wild stock Helisoma I sent her from South Carolina immediately thereafter were adults, and most of Cindy’s albino line were adults as well.  So before experiments could begin, Cindy would need virgins from all three lines.  She put our Florida snails (F) in one tank and our Carolina snails (C) in another and waited for eggs.

And indeed, both the Florida experimental-snails and the Carolina control-snails survived their harrowing late-autumn flights to St Paul, and indeed, both lines began to lay eggs.  And Cindy began to collect and isolate hatchlings from those two lines, and from her already-established albino (A) line as well.  Helisoma reach sexual maturity about 70 – 80 days post-hatch in Cindy’s lab [1], so our experiment entered a second waiting phase.

Alas, Cindy wrote me in January that the Florida hatchlings did not survive.  And in fact, most of the wild-born Florida snails also gave up the ghost in their first couple months under Cindy’s experimental conditions, as well.  The Carolina and Albino lines thrived, as did their lab-born hatchlings, so she felt as though the problem was not temperature, water quality, or any other aspect of her experimental technique.  The Florida snails just did not seem to culture well.  Some snails don’t.

Yow.  When I read those results back in January of 2019, the first thing that jumped off my computer screen and landed in my lap was the similarity between the 5/8 outcross figure in the CxA control and the 4/8 figure in the FxA experiment.  Pigmented offspring from almost exactly half of eight matings, in both CxA and FxA, really?  And almost as amazing was Cindy’s discovery of mixed-phenotype egg masses from outcrossed mothers of both crosses.

Let me back up two steps and get a running start at this entire experiment.  As I mentioned at the top of this essay, Cindy’s previous research results seem to suggest that Helisoma rarely self-fertilize.  So exactly five of the eight albino snails she paired with Florida snails had previously mated with albino fathers, but nevertheless copulated with Florida snails, and bore some FxA hybrid F1.  And exactly four of the eight albino snails she paired with Carolina snails had previously mated with albino father, but nevertheless copulated with Charleston snails, and bore some CxA hybrid F1.  In mixed clutches [12].  The implied mating compatibility between a Helisoma trivolvis population from South Carolina and a Helisoma duryi population from the Everglades of Florida, bordering indeed on reproductive uniformity, is striking.

So were those hybrid F1 fertile?  Alas, we will never know.  In March Cindy regretted to inform me that all her hybrids expired – both the FxA and the CxA hybrids – which she attributed to problems with temperature regulation in the lab.

Ultimately, the 2018 collaboration that I talked Cindy into with Helisoma duryi ended up being only slightly less foolish than the 2009 collaboration I talked her into with Planorbarius corneus.  One, single oral presentation was the sum total yield [13].  I was not in the audience when she presented our results at the University of Salford in April of 2019.  But I feel sure that she did so enthusiastically.

But wait, there’s more.  About 7 – 8 paragraphs ago I mentioned that “most” of the adult H. duryi I sent Cindy back in October 2018 died in January.  But some did survive, to maturity.  And in fact, Cindy was able to carry a pure culture of H. duryi in her St. Paul laboratory for a couple generations, alongside her pure controls from Carolina.  Photographs of which have been assembled into the montage that opened this essay.

Most of Cindy’s lab-born snails, including the first lab-born generation of H. duryi from Florida, developed typical, planispiral shells.  And a few developed shells with a low apex.  Now look back at last month’s essay.  Their parents, collected from submerged macrophytes in The Everglades, bore that peculiar, elongated (“scalariform” or “physoid”) shell morphology typically associated with H. scalaris.  Let’s explore that phenomenon further, shall we?

[2] I wrote about my travails bringing Planorbarius corneus into the USA for Cindy’s 2009 experiments in:

[7] I feel sure that Physa acuta is found in more aquaria worldwide than Helisoma, but almost always as a pest.  I also see an awful lot of Melanoides tuberculata populations hiding in aquarium gravels … whether by accident or design is an interesting question.  See:

[8] I reviewed the gastropod fauna of local and online aquarium dealerships, including their planorbid component, in: