In my post of November 2004 I examined the phenomenon of gigantism in pulmonates, taking as a point of departure the population of Helisoma trivolvis inhabiting an ornamental pond near my Charleston neighborhood. This month I'll develop that theme in an entirely different direction, focusing not on the mean shell diameter achieved by populations of Helisoma in the lowcountry, but on the spire height. 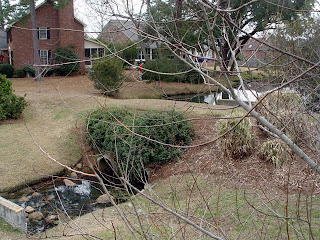 Across the Cooper River east of Charleston lies the suburb of Mt Pleasant, a bedroom community that has witnessed tremendous growth in the several generations since prosperity returned to the Carolina lowcountry. Among the scores of housing developments sprawling across this former patchwork of swampy forests is the subdivision of "Wakendaw Lakes." The photo above shows the low earthen dam constructed to retain the largest of the Wakendaw "Lakes." The nomen "pond" would be more descriptive of this shallow body of water, perhaps 1 - 2 hectares in extent, weedy and protected. It hosts the usual pulmonate fauna of the Charleston area, including a population of Helisoma trivolvis bearing shells that may tend to be a bit more narrow and compressed than we think of as typical (Below, right).
. 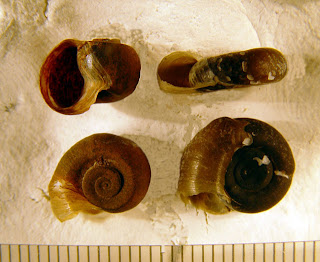 Excess water from the pond overflows a standpipe and exits through an open channel perhaps 2 meters wide at the base of the dam, then runs no more than 3 - 4 meters before disappearing into a culvert under the road. I gather that there must be substantial groundwater input to the pond, for the flow in the channel is mild but constant year round. Residents tell me that the current can be extreme in times of storm. The engineers who built this small work thoughtfully lined the entire four meters of channel with granite rip rap stones to forestall erosion.


Grazing on the stones in the moderate current one can find a population of Helisoma with the very peculiar shell morphology shown above left. The animals are often so obliquely coiled as to violate the definition of planispiral, effectively retaining the shell morphology normally associated with juveniles. But several years ago I ran a batch of allozyme gels comparing the populations above and below the dam, and was able to confirm that all the Wakendaw animals belong to a single randomly-breeding population of H. trivolvis.
.
Once again, I think the best explanation for this phenomenon lies in ecophenotypic plasticity. The planispiral shell borne by typical H. trivolvis in lentic waters enfolds an air bubble, which the snails use to regulate their buoyancy as they graze on floating or emergent vegetation. The narrow aperture of typical trivolvis may function as a defense against smaller predators (such as minnows) that might seek to snatch the snail's body from inside its shell. But a narrow, planispiral shell is worse than useless in a lotic environment. Thus individual H. trivolvis born on rocks in flowing water might retain a lower, broader shell to present less drag in the current, and a wide aperture enfolding a broad foot with which to cling. And again I emphasize, no genetic divergence need be involved.
. 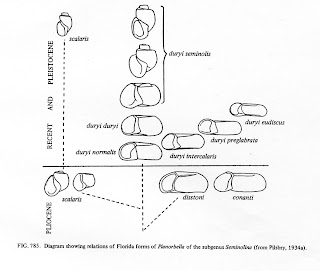 .
As all of us in this group are aware, the taxonomy of freshwater gastropods both here and around the world rests largely, if not entirely, on shell morphology. In Florida, the related species Helisoma duryi and H. scalare are characterized by a broad, "buliniform" shell morphology very much like the H. trivolvis population of the rocky channel at Wakendaw. Burch reprinted a lovely 1934 figure of H.A. Pilsbry's suggesting evolutionary relationships among duryi, scalare, and several other species of Florida planorbids with low, more typical spire heights back to the Pliocene (above). I hate to be cynical, but I can think of an easier explanation.