Fred Thompson, Elizabeth Mihalcik, and the Pleurocerids of Georgia

Science is a human enterprise, alas.  Last month [1] we reviewed the fitful progress of research into the systematic relationships of the Florida Pleuroceridae through the 1970s and 1980s, as a function of the personalities of two scientists, the late Dr. Fred G. Thompson and Dr. Steven M. Chambers.  In 1990 Steve Chambers published a malacological masterpiece, “The genus Elimia (= Goniobasis) in Florida and adjoining drainage basins [2],” correcting Clench & Turner’s 1956 seven-species model down to four.  He then shifted his professional interests out of the field.  Thompson, failing to cite the Chambers 1990 paper or indeed (almost) any of Chambers’ impressive body of research, published an update of his “Freshwater Snails of Florida” in 1999.  He was going in the opposite direction.

Thompson’s Second Edition [3] began with the Clench & Turner seven-species model but added an undescribed “spring Elimia” from Holmes Creek and three new species that “may occur in Florida” (Elimia taitiana, Choctawhatchee Elimia and Escambia Elimia), bringing his grand total up to 11 and foreshadowing things to come.  Simultaneously, Thompson was working with a committee of the AFS to publish a second edition of the Turgeon et al. “Common and Scientific Names of Mollusks,” which appeared in 1998 [4].  The Turgeon work was destined, in a perverse way, to become the Bible of American malacology.  Thus less than ten years after the publication of Steve Chambers’ landmark paper, the Clench & Turner model became gospel, and Chambers’ work forgotten.

Meanwhile, a new graduate student arrived at the University of Florida named Elizabeth L. Mihalcik.  She entered the laboratory of the noted herpetologist F. Wayne King, and was “introduced into the world of invertebrates through her mentor and friend, Dr. Fred G. Thompson.”  In 1996 she was awarded an EPA STAR graduate fellowship for her proposal entitled, “Analyzing morphological forms within southeastern river system species complexes.”
Elizabeth Mihalcik’s proposal originally focused on estimating gene frequencies at polymorphic enzyme-encoding loci in populations of what her mentor and friend referred to as “the Elimia curvicostata complex” of Central Georgia and the Florida drainages of Alabama.  And in fact, I did host Elizabeth at my lab in Charleston for several days in the late 1990s, and showed her everything I knew about allozyme electrophoresis.  But if she ever ran an allozyme gel independently, I never saw the data.

Elizabeth’s (1998) dissertation [5] focused primarily on shell morphometrics: 6 measures, 4 counts, spire angle and 8 ratios of the above in various combinations, blessedly naive of any inkling that any shell character might demonstrate any interpopulation variance for any reason whatsoever.  But the winds of change were blowing across systematic biology.  Her dissertation also included a little bit of mtDNA sequence data.

The first fully automated sequencing DNA machine had come onto the market in 1987, even as Kerry Mullis’ patent for PCR amplification was approved.  The Folmer et al primers to amplify the mitochondrial CO1 gene were published in 1994, and by the late-1990s what had been a trickle of DNA sequence data became a torrent.  Surely such data must be useful for systematic biology, if we could just settle on an algorithm to build our gene trees, yes?  The “phylogenetic species concept,” originally proposed by Cracraft in 1983, came into vogue.

So by the time Elizabeth published her dissertation with Fred Thompson in 2002 [6], her analysis was almost entirely based on mitochondrial CO1 sequence data.  She sequenced 25 individual snails from 24 Pleurocera populations scattered across Florida, Georgia and Alabama, with one individual P. catenaria from South Carolina thrown in to boot.  Her results (below) returned four clusters of roughly 5 - 7 individuals each, corresponding remarkably well to the four species that Steve Chambers documented in 1990. 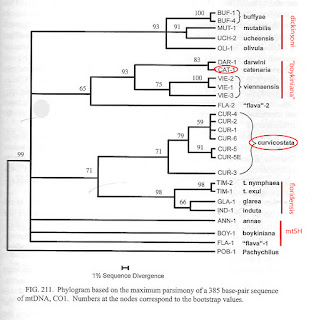 Mihalcik and Thompson also discovered at least three apparent cases of mitochondrial superheterogeneity (mtSH above).  I have very nearly beat this subject to death on the FWGNA blog, but see note [7] below if you need your memory refreshed.  MtSH may indeed have some utility in identifying genuine biological species, but only if the phenomenon is recognized, which Mihalcik and Thompson did not [8].  So setting aside their sequence data for those three individual snails, the remaining snails demonstrate four clusters neatly corresponding to the species Chambers called floridensis, curvicostata, dickinsoni, and “boykiniana*.”

Alas, Mihalcik and Thompson saw substantially more than four species in their gene tree.  They interpreted their 25 mtDNA sequences as evidence of 15 species and subspecies of Pleurocera in Central Georgia and the Florida drainages of Alabama, as follows.  Starting with baseline curvicostata, a catenaria reference from South Carolina and two flava references from Alabama, M&T resurrected four old Isaac Lea names from synonymy: induta, mutabilis, viennaensis, and ucheensis.  They raised Goodrich’s subspecies timida to the full species level, and described two new subspecies underneath it: exul and nymphaea.  And they freshly described five new species: exusta, glarea, annae, buffyae, and darwini, the last three of which Elizabeth named for her dogs.

When one steps back to consider that the authors did not even consider six of the seven Clench & Turner species as members of the “Elimia curvicostata complex” (albanyensis, athearni, clenchi, dickinsoni, floridensis and vanhyningiana), the Mihalcik and Thompson hypothesis constitutes a staggering multiplication of pleurocerid nomina [9] for the region.

I myself was not idly sitting by in Charleston, however.  Through most of the 1980s I confess that I became distracted by hard clam aquaculture, and by the 1990s Amy Wethington and I were beginning to work on Physa.  But I never forgot my first love, which was the pleurocerid snails.  And in 2002, just a few months prior to the work of Mihalcik & Thompson, an undergraduate student and I published “A survey of genetic variation at allozyme loci among Goniobasis populations inhabiting Atlantic drainages of the Carolinas” [10].

We estimated gene frequencies at 8 polymorphic loci in 12 populations, picking up in NW North Carolina where my dissertation left off and extending through South Carolina to touch eastern Georgia – 4 populations of P. proxima and 8 populations of P. catenaria, including the type locality 50 km W of Charleston.  Our most interesting result touched a very familiar theme on this blog [11], ecophenotypic plasticity in pleurocerid shell morphology.  Populations of P. catenaria bearing typical shells in the Piedmont of the Carolinas tended to lose their spiral cords and costae as they ranged into the coastal plain, independently developing the shell form associated with the subspecific nomen “dislocata” [12].

In 2004 Thompson published a third edition of his “Freshwater Snails of Florida,” this update strictly online [13].  From seven species of pleurocerid snails in 1984 and eleven in 1999, Thompson’s fresh online edition now recognized 12 species in Florida alone, the “Choctawhatchee Elimia” formally identified as buffyae, the “Escambia Elimia” now annae, and a new “Rasp Elimia” waiting in the wings, not as yet described.  None of Steve Chambers’ papers whatsoever were cited in Thompson’s 2004 online version.  Even the passing mention of Chamber’s 1980 paper had now disappeared.

So ten years ago, this was the situation:  Two morphologically variable species, P. proxima and P. catenaria, were understood to range from southern Virginia through North Carolina and South Carolina to the Georgia border.  At the Georgia border P. catenaria disappeared, to be replaced by over 20 rare and endemic pleurocerid species, each occupying single subdrainages, or in some cases single springs.  Does that model seem biologically plausible to you?
In 2011 John Robinson and I extended our allozyme survey across Georgia, linking at long last my intensive dissertation work in Virginia with my buddy Steve Chambers’ extensive dissertation work in Florida [14].  John and I sampled 14 populations, including populations identified by Mihalcik & Thompson as viennaensis, darwini, mutabilis, induta and timida nymphea, reaching down to the boykiniana and floridensis populations of Chambers.  We estimated genetic divergence at 11 polymorphic allozyme encoding loci, calibrating our observed values with three populations of P. proxima, the conspecific status of which is unchallenged.

We did not include any bona fide curvicostata or dickinsoni in our survey, because those two taxa seemed unambiguous to us.  But the bottom line was that all the Georgia populations we sampled were either floridensis (including induta and timida) or catenaria (including albanyensis, boykiniana, darwini, mutabiliis, and viennaensis).  There are exactly four species of pleurocerid snails in Central Georgia, Florida, and the Florida drainages of Alabama as hypothesized by Chambers: curvicostata, dickinsoni, floridensis and (*a minor correction) catenaria, all boasting extensive ranges.  And the most widespread of those species, Pleurocera catenaria (Say 1822) extends through five states, from Virginia through the Carolinas and Georgia to mimic P. floridensis at Ichetucknee Springs, bringing the discovery Steve Chambers first reported in 1978 [15] into a properly regional context.

I didn’t expect Dr. Thompson to embrace the four-species model in 2011 any more than he did in 1990.  His species concept was rooted in nineteenth-century typology, no different from such giants of American malacology as Henry Pilsbry and F. C. Baker.  Indeed, distinction of species by shell costations or spiral chords is not conceptually different from distinction by individual nucleotide substitutions, as do many of our colleagues in the present day.  But I confess, when I saw the species list published by P. D. Johnson and colleagues in 2013 [16], including as it did albanyensis, annae, athearni, boykiniana, buffyae, clenchi, darwini, exusta, glarea, inclinans, induta, mutabilis, taitiana, timida, ucheensis, vanhyningiana, and viennaensis, I was just a little bit disappointed.

[1] Fred Thompson, Steve Chambers, and the pleurocerids of Florida [15Feb17]

[7] Pleurocerid populations (and a variety of other gastropod populations as well) often demonstrate “mitochondrial superheterogeneity,” where two or more members demonstrate 10% sequence divergence or greater for any single-copy mtDNA gene, not sex-linked.  For more see:
Mihalcik and Thompson only sampled single individuals from almost all [8] of their populations, so (strictly speaking) mtSH cannot be recognized.  But based on my personal experience with many datasets of this sort, the cases labelled flava-1, annae, and boykiniana all look like mtSH to me.

[8] The only population from which M&T sampled more than one individual was their reference “flava” from Alabama, the two individuals sequenced from which apparently demonstrating more than 20% sequence divergence.  They might have been the first researchers ever to discover mtSH in the Pleuroceridae, had their eyes been open.  Dillon & Frankis didn’t formally document the phenomenon until 2004 [PDF].

[9] Here’s something even more remarkable, if you stop to consider it.  The 15 populations M&T identified as being members of the “Elimia curvicostata complex” (explicitly excluding floridensis, dickinsoni, or boykiniana) apparently represented all four of the Chambers species (curvicostata, floridensis, dickinsoni, and boykiniana) about equally.   Shows you the value of shell morphology, doesn’t it?

[10] Dillon, R. T. and A. J. Reed (2002)  A survey of genetic variation at allozyme loci among Goniobasis populations inhabiting Atlantic drainages of the Carolinas.  Malacologia 44: 23-31. [PDF]

[11]  Much more on cryptic phenotypic plasticity in pleurocerid shell morphology:
[12] More about the pleurocerid subspecific nomen “dislocata” and its treatment by Turgeon [4] can be found at:
[13] Thompson, F. G. (2004) on-line edition: An identification manual for the freshwater snails of Florida. Florida Museum of Natural History, Gainesville, FL [html].