The Most Improbable Invasion?

Editor’s Note – This essay was subsequently published as: Dillon, R.T., Jr. (2019d)  The most improbable invasion?  Pp 33 - 40 in The Freshwater Gastropods of North America Volume 4, essays on Ecology and Biogeography.  FWGNA Press, Charleston.


I've just returned from southeastern Pennsylvania, where I have seen, with my own eyes, the most improbable invasion in the history of malacology.  I think.  But before diving into the specifics, let’s review what we know about the biology of invasive species, shall we?

All this has been a staple of the ecological literature at least since the days of Robert MacArthur’s “r and K selection” [1].  I myself developed a “USR” model of life history adaptation for my (2000) book, extending MacArthur’s two points to three, inspired by the triangular theory of J. P. Grime [2].  The most recent review of the biology of invasive species, from a malacological perspective, is that of Cowie and colleagues [3]. 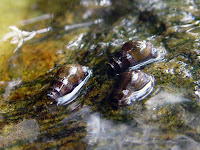 But no matter how you slice life histories, two ways or three, Pleurocera proxima must be the most unlikely invader in the entire North American freshwater gastropod fauna.  Populations of P. proxima are adapted to small, isolated, softwater streams of the southern Appalachians and upper Piedmont – harsh and poor in nutrients, but stable and predictable.  Females demonstrate very low reproductive efforts relative to their body mass, laying small numbers of small eggs annually, but are long-lived (perhaps ten years?) and iteroparous.

The dispersal capability of P. proxima is so poor that significant gene frequency differences have been documented over distances of only a few meters [4].  Populations simply do not move, and may not have moved for hundreds of millions of years [5]. When I first conceived of the USR model of life history evolution in freshwater mollusks, it was P. proxima I had in mind as the archetypical “S” species – a stress tolerator, the 180-degree opposite [6] of an “R.”  It’s a cactus, not a weed.

So I was shocked – as shocked as a snail guy can be – when I opened an email from Dr. Willy Eldridge of the Stroud Water Research Center in December of 2010.  The Stroud Lab is located in rural Avondale, PA, on a small tributary of the Delaware River called White Clay Creek.  And attached to Willy’s email was a photo of P. proxima.

I have dedicated much of my professional career to the study of P. proxima [7], logging thousands of miles on the back roads of the southern Appalachians to map its distribution.  And I knew, for an absolute fact, that the northernmost population of P. proxima reaches a tributary of the Roanoke River just south of Lynchburg, in central Virginia [8].  Here was a photo of my snail – the study organism for my dissertation, the coverboy of my book – snapped 400 km northeast of anywhere it could possibly be. 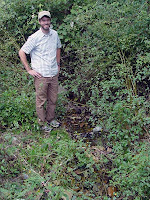 So it took me almost two years, but last month I sojourned to Pennsylvania to see this thing which has come to pass.  The population Willy showed me near the Stroud Lab [right] does not inhabit White Clay Creek itself, but rather a tiny tributary – a groundwater trickle – not a meter across.  And Willy reported that in the last couple years he has documented nine additional populations in similar little trickles, extending across 20 km of southeastern Pennsylvania through three tributaries of the Delaware – White Clay Creek, Red Clay Creek, and the Brandywine River.

My initial reaction was that it looked as though a 15 x 20 km rectangle of North Carolina had been transported three states north.  If anything, Willy’s ten Pennsylvania populations seemed even more isolated than typical P. proxima populations in the home range.  If this were North Carolina, I would have found a population in the (main) White Clay Creek, a couple hundred meters downstream from the trickle where the photo above was taken.  But I did not.

So Willy’s hypothesis is not that he has discovered an artificial introduction, but that he has discovered a natural extension of the range of P. proxima, however subsequently fragmented it may have become. Willy thinks that the absence of the snails from White Clay Creek (and 150 km of Maryland, and 250 km of Virginia?) may be due to road salt and other modern perturbations and disturbances.  Perhaps harsh agricultural practices over the last couple hundred years throughout the region? Or perhaps something bigger, over the last couple hundred million?  Hmmm.

I blame the DuPonts.  Nestled in the green, rolling hills approximately 10 km east of the Stroud Lab is Longwood Gardens, the estate of Pierre DuPont (1870-1954).  DuPont purchased the 1,077-acre property in 1906 [9] and over the course of thirty years developed a lavish horticultural complex of greenhouses, conservatories, gardens and farms, which he opened to the public on a regular basis.  And in his will he established the Longwood Foundation Inc, a charitable organization which continues to administer the grounds today as a public arboretum for “exhibition, instruction, education and enjoyment.”

Longwood Gardens is especially renowned for its fountains, pools, canals, and elaborately engineered water features.  As early as 1876, DuPont was “mesmerized by the huge display of water pumps in action at the Philadelphia Centennial Exposition,” and in 1893 he was “astounded” by the grandiose fountains at the Worlds Columbian Exposition in Chicago [10].  At Longwood he oversaw the construction of lavish “water gardens” which he seems to have stocked with a variety of aquatic vegetation from around the world.  I don’t actually understand the plumbing of the system, but I suspect that DuPont’s water works may bridge both the Brandywine River and Red Clay Creek. 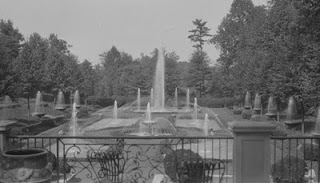 Did Pierre DuPont import aquatic vegetation, rock, or other substrate from some stream in the southern Appalachians or upper Piedmont to stock his elaborate water gardens?  If so, how might P. proxima have spread from a Longwood focus, even if it does bridge the Brandywine and Red Clay systems, to the little tributary of White Clay Creek 10 km west where I snapped Willy’s photo last week, skipping (as it apparently has) a great many perfectly suitable little streams in between?  I do not know.

But I do know that the most important predictor of success in an invasive species is none of those I listed in the second paragraph of this essay.  Invasive species must be different.  Successful invaders exploit different resources, inhabit different habitat patches, and conduct their ecological business in a different fashion from native species.  And indeed all the successful invaders of the modern North American freshwater gastropod fauna - Pomacea, Bellamya, Viviparus, Bithynia, and Potamopyrgus – look strikingly different from any element of our native community, just as Corbicula and Dreissena look strikingly different from our native freshwater bivalves.  There are no cryptic invasions [11].

All of the life history adaptations I listed in paragraph two apply to species naturally adapted as invaders, which (as a general rule) they are always doing, naturally.  So focusing (as we are) on artificial introductions, the most important criterion for success becomes competitive ability – whether a potential invader is ecologically different enough to find an “empty niche” it can exploit upon its unexpected arrival [12].  And Pleurocera proxima is most certainly different from any other element of the freshwater gastropod fauna in southeastern Pennsylvania.  Or most of the world, actually.

Or perhaps Willy is right, and P. proxima is native to southeastern Pennsylvania?  And my paragraph two is complete as it stands, and the last five paragraphs I’ve written are wrong?  Willy tells me that he’s collecting genetic data that he expects will shed some light on this fascinating question.  We’ll keep you posted.

[4] Dillon, R.T. (1988) The influence of minor human disturbance on biochemical variation in a population of freshwater snails. Biological Conservation 43: 137-144  [pdf]

[6] Although Grime’s CSR model of life history evolution in plants was (quite literally) triangular, my USR model put U in the middle between S and R.  Hence there’s a full 180 degrees between S and R, not a mere 120.

[7] See my P. proxima page on the FWGNA site for the (N=16!) papers my colleagues and I have published on this fascinating species over the last 35 years.  [Pleurocera proxima]

[8] Setting aside the populations I myself introduced into a tributary of the Shenandoah in 1982.  See Dillon, R.T. (1986) Inheritance of isozyme phenotype at three loci in the freshwater snail, Goniobasis proxima: Mother-offspring analysis and an artificial introduction. Biochemical Genetics 24: 281-290.  [pdf]

[9] To be fair, the estate was originally developed as an arboretum by John and Samual Pierce as early as 1798.  By 1850 the Pierce brothers had “amassed one of the finest collections of trees in the nation” according to Wikipedia, and the property was already open to the public as “Pierces Park.”  So I suppose the introduction of exotic fauna (such as P. proxima) along with the flora might predate the DuPont era.

[10] I got most of this historical background from the (really quite lovely) Longwood Gardens website.

[11] Although invaders are never cryptic under native faunas, they are often cryptic among themselves.  So there are two more-or-less cryptic species of Asian Bellamya in North America, and two South American Pomacea, and two Eurasian Dreissena, and two east Asian Corbicula.  I think this tends to support my point, but I’m not sure how.

[12] This is the third time I have confessed an embarrassing predilection for the “empty niche hypothesis” on this blog.  Also see:
"Invaders Great and Small"  [19Sept08]
"Community Consequences of Bellamya Invasion"  [18Dec09]
Posted by Rob Dillon at 11:33 AM No comments: