Word reached us last week that a population of Pomacea has become established in the vicinity of Myrtle Beach, SC, extending the range of this invasive pest north about 500 km. The South Carolina Department of Natural Resources is currently studying options for control.


At this time the introduction seems localized to a single pond in a trailer park in the town of Socastee, about 10 km W of Myrtle Beach. The area was quite poorly drained prior to development, and ditching and filling operations have resulted in the creation of several retention ponds in the neighborhood. The population of Pomacea was discovered by SCDNR personnel investigating complaints of excessive algal growth in these bodies of water. 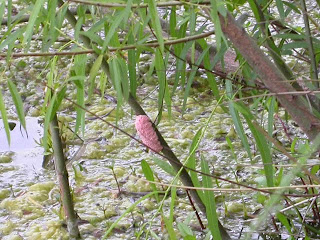 On May 6 our colleague David Knott of the SCDNR reported "lots of P. insularum egg clutches (above) and three snails (two were copulating) in one of several ponds." Thanks to David for the photo below. 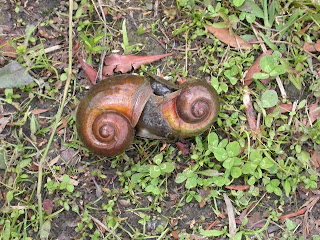 Most of us in this group are all too familiar with the damage to aquatic crops and macrophytic vegetation caused by populations of Pomacea introduced worldwide. The pest has spread throughout Florida since its initial introduction in the 1980s. In 2005 it appeared in South Georgia (Post of 11/05), where attempts to control it have not been notably successful.


Although we do not have any evidence regarding the origin of the South Carolina population, we speculate that the initial introduction may have come through the release of unwanted pets. Pomacea (of several species) were readily available in local aquarium stores until a few years ago, and hobbyists traveling up from Florida might easily transport wild-collected animals.


The pond inhabited by the South Carolina population drains through underground culverts toward the Intracoastal Waterway, a degraded habitat that would not suffer terribly from the release of molluscicides. But upstream just a few kilometers is the mouth of the Waccamaw River, still lovely in spots, leading north to Lake Waccamaw, the pristine home of several endemic species. 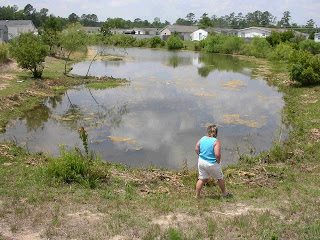 Come on, boys! Are we going to take back-sass from a bunch of fat snails in a scum pond (above)? This is South Carolina - let's nuke 'em!

Posted by Rob Dillon at 4:08 PM No comments: