The Type Locality of Lymnaea elodes

Editor’s Note.  This is the fourth installment of what I think will turn out to be a five-part series on the tangled species relationships of the North American stagnicolines.  It’s not essential, but you might find it helpful to read my essays of [22June15], [14July15], and [29July15] before proceeding onward.

Last month I noted that Thomas Say described two “stagnicoline” lymnaeids in 1821, the (pale, fat) Lymnaeus emarginatus from “lakes of Maine” and the (dark, skinny) Lymnaeus elodes [1].  Say was much more precise about the type locality of the latter species, specifying that it “Inhabits Canandaigua Lake.”  And apparently he considered his Lymnaeus elodes so distinct that he did not feel called to distinguish it from any other North American freshwater gastropod [2].  The figure below was scanned from Say’s 1830 “American Conchology” [3].

So as the vagaries of my 2012 field season played out, late July was scheduled for an extensive survey of northern Pennsylvania, home ported at the University of Pittsburgh’s Pymatuning Laboratory of Ecology [4].  And I calculated that at least one of my excursions out of PLE might take me within striking distance of the elodes type locality on Lake Canandaigua.

And once again I had done some homework – this time, a bit more thoroughly.  Digging around in the older literature I was pleased to unearth a charming paper written in 1932 by my hero [5] F. C. Baker: “The Ecology of Say’s Limnaeus elodes [6].”  Regarding the type locality, Baker wrote:

“It is obvious that a pond or swamp-inhabiting snail would not live in the waters of a large lake like Canandaigua and its exact ecological station must necessarily be sought in a normal habitat near the lake.  No specimen of elodes has ever been found living in the lake.  Many years ago the north end of the lake, where the outlet discharges its surplus waters, was an extensive swamp or marsh inhabited by elodes and other mollusks.  This area has now been drained for building purposes.  The southern end of the lake is also marshy.  It is probable that the specimens from which Say drew up his original description came from the north end of the lake, either in the marshy tract bordering the outlet, or from a beach pool or pond bordering the upper (southern) end of the lake.”

So I arrived at the upper end of the Canandaigua Lake in the late morning of 27July12, launched my kayak from the Woodville Access, and paddled south to prospect for a possible “beach pool or pond bordering.”  My goodness, it was swampy in there, with luxuriant growths of floating and emergent macrophytic vegetation.  I can rarely remember seeing larger populations of Physa acuta or Lymnaea columella.  I also netted a few Gyraulus deflectus and Valvata tricarinata, both of which were interesting to my southern eyes.  But I was looking for elodes habitat, which should be isolated and essentially fishless.  And to quote my own field notes of 7/27/12 verbatim, “If there are any vernal ponds isolated in this vast sea of cat-tails and swamp forest, one could not find them from a kayak.  The only way to find stagnicoline habitat here would be by helicopter.”

So I paddled back to the truck and drove along the western shore of the lake, a distance of perhaps 15 miles, noting (as Baker’s paper had led me to expect) a “very precipitous” shoreline featuring essentially zero habitat for freshwater gastropod populations of any sort.

And when I arrived at the lower (northern) end of the lake, I again found it as Baker described in 1932, “drained for building purposes.”  More so today, I feel sure.  I did enjoy a lovely stroll in what probably represents the vestigial remains of Baker’s “extensive swamp or marsh inhabited by elodes,” now maintained (rather nicely) by the City of Canandaigua as “Lagoon Park.”  And I was impressed by the aquatic vegetation in the shallow ponds protected within the park, as well as by their large populations of bream, bluegill, and panfish of all sorts.  Pleasant to the eye of the visitor, certainly, but most inhospitable for Lymnaea elodes. 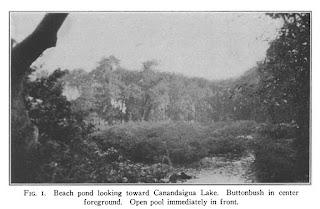 Fortunately I had an ace up my sleeve.  The occasion of F. C. Baker’s 1932 paper was not to lament the absence of L. elodes from the southern, western, and northern shores of Canandiagua Lake, but to rejoice in their abundance on the eastern.  He wrote:


“A few years ago, while exploring the east side of the lake, a large beach pond was discovered in which were living many large pond snails of the form known as elodes.  These shells are exactly like Say’s types deposited in the museum of the Philadelphia Academy and like his figures in the American Conchology… The pond (Fig 1) is situated about three miles south of the City of Canandaigua… near a group of summer cottages erected on higher ground southward.”

Baker’s Figure 1 is reproduced above.  What a lovely spot, even in black and white!  Baker described the open pool as covering about three acres, with perhaps two additional acres of “surrounding vegetation” (which he cataloged in detail), ten “species and races” of freshwater gastropods, and three species of pisidiid clams.

So leaving The City of Canandaigua and driving approximately three miles south on the eastern shore of the lake, I encountered, in this order: a “Deep Run Park,” a “Crystal Beach,” and a “Cottage City.”  Deep Run Park was a nice public beach administered by Ontario County (NY), with picnic facilities and plenty of free parking, but no habitat for stagnicoline lymnaeids in evidence.  Cottage City turned out to be a modest community of (primarily) vacation homes dating back to the Victorian era, perched (as Baker indicated) “on higher ground southward.”  And what about that “Crystal Beach” in the middle?

Google Earth does indeed suggest a wooded depression (or vernal pond?) in the region of my map marked “Crystal Beach.”  But alas, I could find no public access.  Here is a photo I downloaded from the Facebook page of the Crystal Beach Betterment Association: 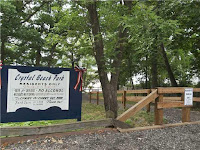 I didn’t see any images depicting marshy or swampy areas on the CBBA page, but comparing the location of their private property to Baker’s (1932) description, it seems likely to me that his pond is (or was) in there somewhere [7].

It also seems likely that with a properly-directed telephone call or two and sufficient lead time, an interested scientist such as myself might wrangle an invitation from the CBBA to explore their property for that elusive topotypic population of L. elodes.  But staring at “No Trespassing” signs as the sun set on Friday evening, 27July12, this particular interested scientist was clean out of luck.

I filed my sad report with Samantha upon return to the Pymatuning Lab that next afternoon.  She did not respond, but perhaps no response was called for.  And in fact, over a year would pass before I heard from Samantha again.  I felt sure that she was very busy up there in Ann Arbor somewhere, cranking out a forest of gene trees, or whatever it is that the young kids do these days.  Coming next time, “The Secret Thesis of Samantha Flowers.”  Stay tuned!

[2] But it is interesting to note that Thomas Say did realize that his North American elodes was quite similar to European L. palustris, from which he could not, apparently, distinguish it.  At the bottom of his description of L. elodes, Say noted: “This species was found by Mr. A. Jessup; it bears the most striking resemblance to L. palustris.  The variety was found by the same enterprising mineralogist at Morristown, New-Jersey.  I have subsequently received specimens from Mr. S. B. Collins, of New-York, who procured them in a marsh near the Saratoga springs.”  So if (as I fear) the Canandaigua elodes population has subsequently gone extinct, I think a case could be made for either Morristown or Saratoga Springs as a “substitute” type locality.

[4] A public acknowledgement of gratitude is here extended to my good friends at The Pymatuning Laboratory of Ecology – Andy Turner, Aaron Stoler, Rick Relyea (who has since moved on) and Chris Davis (currently in charge).