Editor's Note. This essay was subsequently published as Dillon, R.T., Jr. (2019b)  The Lymnaeidae 2012: Stagnalis yardstick.  pp 51-56 in The Freshwater Gastropods of North America Volume 2, Essays on the Pulmonates.  FWGNA Press, Charleston.


Bengt Hubendick was a genius in the way Picasso was a genius.  It’s not that he didn't make mistakes.  They just didn't matter, because that wasn't the point.

At left [1] is a “mean photograph” of Lymnaea peregra from Hubendick’s 1951 monograph.  Here he has photographed 20 shells from a single population in Sweden, overlain the negatives, and developed a single print.  Hubendick’s point here is variance.  Variance is the stuff of evolution.

And what has become of our science today?  In April [2] we touched briefly on the 2010 paper by Ana Correa and her colleagues, synthesizing 15 years of research on molecular evolution in the Lymnaeidae [3].  Essentially every one of the 53 tips on Correa’s tree was labeled with a different specific nomen. There was no estimate of intraspecific sequence variance whatsoever.

Nor am I able to find any such estimate anywhere in the entire heap of 21 papers on lymnaeid molecular phylogenetics stacked like cordwood on my desk this afternoon [4].  All 21 seem to adhere strictly to what might be called the “U1s2nmt3 Rule.”  Workers usually sequence one individual per population, sometimes two, and never more than three.  And they usually sequence one population per nominal species, sometimes two, and never more than three.  Apparently there has been some international conference of bonehead tree jocks where a U1s2nmt3 Rule was proposed and adopted without debate, to which I was not privy.

But gene trees are (at best) weak, null hypotheses of population relationships [5].  They require control and calibration, no different from any other measurement technique in the toolbox of evolutionary biology.  When applied to estimate the genetic relationships among a set of populations unknown to us, we first need an estimate of the variance within populations, and then between populations within species.

So in April I asked the rhetorical question, “Do we know enough about the biology of the lymnaeid snails to make sense out of all the sequence data published in recent years by Remigio, Bargues, Mas-Coma, Pfenninger, Streit, Jarne, Pointier, and others?”  The answer is, “Maybe we know enough about Lymnaea stagnalis.”

Back in the Glory Days of the Modern Synthesis, Hubendick suggested that the lymnaeid fauna of North America might share as many as three species with that of Europe. And much less problematic than L. palustris, about which we have obsessed during the months of April and May, was Lymnaea stagnalis.

In the 20th Century L. stagnalis became a popular laboratory model for neurobiologists, parasitologists, and physiologists of all stripes, to the point that my simple search of the NCBI PubMed database (for example) yielded 1,344 hits.  Lymnaea stagnalis may surpass Biomphalaria glabrata (1,222 hits) for the mantle of “best known freshwater gastropod.”

So I went fishing in GenBank for L. stagnalis sequences in an effort to calibrate the Correa gene tree.  My initial hope was to analyze the same set of genes used by Correa and colleagues – 16S, ITS1 and ITS2 – but I found no ITS sequences for L. stagnalis from the American side of the pond.  The eight sequences for 16S in GenBank (from four sources) included four Canadian and four European, I think [6], but there were some irregularities in those data, which gave me pause. 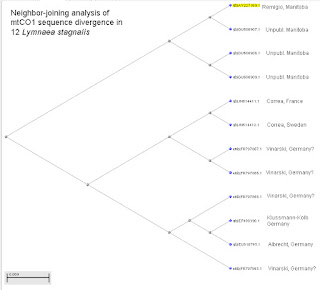 The best dataset in GenBank seemed to be that for CO1, in any case, with four Canadian and eight European sequences from six different sources, all over 600 bp in length, so that’s what I focused on.  The figure above shows a neighbor-joining tree based on simple percent sequence differences among four CO1 sequences from Manitoba, six from Germany (I think) and one each from Sweden and France (Click for larger).  The scale bar is a bit misleading, but divergence within continents ranged up to about 5%, with divergence values between continents in the 7-9% range.

That’s sort-of consistent with the 16S situation, but the 16S sequences were only in the 400-450 bp range, and the divergence didn’t look nearly as clean as in the CO1 data I’ve figured.  The GenBank accessions suggested that Correa and colleagues may have obtained a 16S sequence in an L. stagnalis sampled from France that matched one of Remigio’s Manitoba sequences at 100%.  Meanwhile the maximum divergence across the whole set of eight was between Remigio’s Canadian and Italian sequences, at 13%.

In any case, if we re-examine the Correa tree using 5% expected sequence divergence within-continent [4] and 10% between, we obtain the groupings I’ve labeled on the right margin in the figure below (Click for larger).  From North America (that yellowish color in Correa’s figure, hard to distinguish) we see one group comprising nominal catascopium, emarginata, elodes and the “occulta” sample from Poland we mentioned in April.  We also note that individual samples of caperata, megasoma, and columella were distinctive – no surprises there.  And there’s evidence for a “Radix” population up in Canada matching Eurasian luteola – that’s interesting. 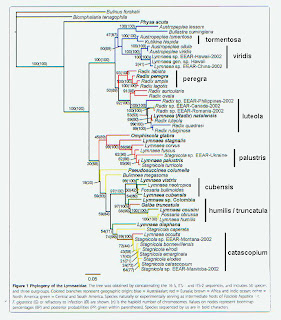 The two other North American groups suggested by Correa’s gene tree include the little mud-dwelling lymnaeids we here tend to call “fossarines.”  The situation with L. humilis and L. cubensis will, I think, bear closer examination.  But I’m clean out of patience with this subject for today, and I suspect the attention of my readership may be wearing thin as well.  So let’s sign off with what should be a standard disclaimer for inquiries of this sort.

A species is a population or group of populations reproductively isolated from all others.  Gene trees may or may not reflect reproductive isolation [7].  So the N = 8 groups (and N = 11 singletons) I have marked on Correa’s gene tree are not “species,” even though I have labeled them that way.  There’re just gene sequences.  More about which next time…

[4] In fairness, Correa and colleagues (Infection, Genetics & Evolution 11: 1978-1988) published a “DNA barcoding analysis” in 2011 similar in spirit to the L. stagnalis study I have developed above.  Their combined analysis of sequence divergence across multiple studies and multiple species yielded a “barcoding gap” (presumably marking the boundary between intraspecific and interspecific variability) around 6%, quite consistent with my within-continent estimate.  Correa et al. (2011) did not examine an intercontinental subset, however.

[6] Most of the sequences I inspected in GenBank were missing locality data! A few authors supplied information regarding the site of collection in the “source” field.  But most just entered “source = mitochondria.”  Duh.