Last month I enjoyed one of the grander adventures of my professional career, an expedition in search of the (nearly-endemic) cave snail of southwest Virginia, Holsingeria unthanksensis (1). The essay that follows is a travelogue of my experiences and observations. In addition, as an innocent-abroad newly introduced to cave biology, I picked up a couple unexpected insights of a more general ecological nature on the expedition, which I humbly offer here for your interest.

Unthanks Cave, with about 7.3 miles of mapped passages, was purchased by The Nature Conservancy several years ago and has recently been deeded over to the Commonwealth of Virginia. The leader of our expedition was Wil Orndorff, coordinator of karst protection for the Virginia Department of Conservation & Recreation (DCR). There were two other DCR personnel on the trip with us, Carol Zokaites and Bill Dingus, as well as Brian Watson and Melanie Stine from the Virginia Department of Game & Inland Fisheries and myself. Melanie took the photo (below) of me, Brian, Wil, Bill, and Carol.
. 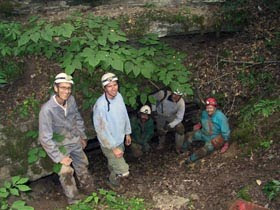 The cave is roughly Y-shaped (about as rough as the letter Y could possibly be) with a base of perhaps 100 meters, a right prong extending perhaps a mile to pools wherein the Holsingeria dwell, and a left prong extending many miles, intersecting along its course a small underground stream. No Holsingeria were previously known from this left prong.

The six of us entered the cave through a locked gate, descended a rocky slide, and headed down the right prong about 10:00 one steamy mid-July morning, half climbing over boulders and half crawling in the mud. It was real exciting. Some of the wetter rooms featured lovely stalactites, aprons, flowstones, and all manner of classic cave formations. But most of the rooms were dry(ish), and hence the walls and ceilings were bare, although often towering to great height or falling to inky darkness.

Closer to the mouth of the cave we saw a couple species of very pretty salamanders and cave crickets with long, spidery legs. As our journey progressed we saw blind isopods and amphipods, planarians, and beetles. None of these populations was large - all seemed to be sparse inhabitants of tiny habitat patches in a vast expanse of black nothingness.

Around noon we arrived at the end of the right prong of the cave, and a series of small shallow pools of crystal-clear water. I don't think there were more than 10-12 such pools, some just a few feet long, generally no more than a few inches deep. And on the small cobbles in these pools, if one got on one's knees and made a careful inspection, very occasionally

one could spy tiny white snails no more than perhaps 4 mm in maximum dimension - Holsingeria unthanksensis. The photo at left was taken by Wil.

My first impression was that, surely, this can't be the entire habitat, nor all the snails. My general experience has led me to expect hydrobiid populations, especially in springs, to look like grains of sand on the beach. But I'd guess that the six of us spent 15 - 20 minutes on our knees just observing, and I don't think we saw more than 20 - 30 animals in total. Wil collected three.

I was also impressed, oddly enough, by the shells of dead land snails scattered about this particular little region of the cave. I do not know how far we were under the surface at this point, but I don't think we were very deep. After our initial descent through the cave mouth our journey was more-or-less horizontal, and occasionally the ceilings were quite high, 30 meters or more. I should guess that the energy input to this system comes from fine organic debris raining from the surface. And I think land snails quite often, burrowing deeply into the rocky hillside above, slip and plummet to their deaths on the cave floor below.

Wil had visited this particular spot on at least two previous occasions, and his strongest impression was that the water levels were strikingly low. Southwest Virginia had been suffering a drought for many weeks, with the Powell River at about 10% of its historic daily flow. Wil was also surprised not to find any of the second species of hydrobiid documented from this site, Fontigens nickliniana. Bob Hershler's original description of the environment mentioned that Holsingeria was found together with Fontigens, a much more widespread taxon, locally very common in above-ground springs. Wil had also noticed the Fontigens on his earlier trips. But on this day, no Fontigens were in evidence.

These observations led me to the first of what I should characterize as an "unexpected revelation." Yes of course, cave environments are generally more stable than surface environments. But that doesn't mean that caves don't change. There was plenty of evidence in the cave of water levels much higher than those we observed - some levels lasting long enough to form "rimstone" around the pools, and some levels simply evidenced by damp marks. It can't be too many years before any such tiny population of aquatic snails must go extinct, right?

We next decided to walk back almost to the entrance of the cave and explore the left prong, our objective being the small river about a mile further down this second passage, from which no aquatic gastropods have ever been observed, by John Holsinger (2) or by anybody else. It was Wil's hypothesis that snails do not inhabit this river because the environment is too flashy - perhaps too variable in temperature or too closely in contact with the surface. But about 10-15 minutes of searching by four of us did uncover one (individual!) Holsingeria at the left prong river. A range extension!

In fact, Holsingeria unthanksensisis not endemic to Unthanks Cave. The species has been collected in at least four other caves scattered about southwest Virginia, with an enigmatic population (3) documented from Skyline Caverns as well, perhaps 300 miles north down the Shenandoah Valley. These caves all lie in Ordovician Limestone that reaches the surface in ribbons and patches through the ridge and valley province that extends from Tennessee to Pennsylvania.

So the second "unexpected revelation" I took away from my big adventure to Unthanks Cave was that what we were doing, essentially, was dropping a tiny bucket dredge on the bottom of splattery ocean many hundreds of miles long. My colleagues in the marine biology community understand that, if they find 30 snails in dredge #1 and zero snails in dredges #2 - 10, it doesn't mean that the snails were endemic to site #1, and that their total population size was 30. Rather, they interpret such data as the consequence of a patchy distribution, the degree of apparent patchiness being a function of sample volume (4). And the snails may not be rare, nor their extinction imminent.

Our stalwart party emerged from Unthanks Cave around 4:30 that afternoon, blinking in the light, baking in the heat, exhausted, muddy, and sore. What a great day! My special thanks go to Wil Orndorf (VaDCR) and Brian Watson (VaDGIF) for directing and producing this, our brief peek through a tiny window, into another world.

(2) I should like to meet Dr. John R. Holsinger, the cave biologist who first brought Bob Hershler's attention to the little snails that bear his name. Holsinger, who has a tremendous reputation in the local caving community, was the primary author of the cave map Wil used to guide our expedition.

(3) The taxonomic status of the Skyline Caverns snail is unsettled at this point. Hershler considers it "a probable congener" of H. unthanksensis.

(4) I'm not sure that ecologists are as conscious of sampling as we once were. My favorite reference on dispersion patterns and spatial distributions is an older one - Chapter 4 of R. W. Poole's (1974) Introduction to Quantitative Ecology (McGraw-Hill).
Posted by Rob Dillon at 3:50 PM No comments: