Kudos to our good friend Bruce Stephen for his thorough review of the freshwater gastropod fauna of Nebraska, just published in the most recent issue of the American Malacological Bulletin.  A pdf download is available from the link below [1].

The surface waters of Nebraska drain entirely to the east, primarily through the broad, sandy Platte River, as well as through the Niobara and Republican Rivers, all tracing slow, braided paths toward the Missouri.  Glaciers extended over the greener, eastern quarter of the state about 10,000 years ago, although the western half of the state seems to have remained a bit too dry.  Today about 40% of the state is planted in row crops, dependent largely on the miracle of modern irrigation.  The other 60% of Nebraska is sand hills and semi-arid plains, typically given over to ranching. 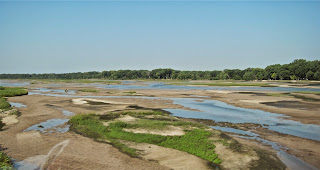 I am sure that there are many nice things that could be said about Nebraska and its fine citizenry, but the state does not strike me as especially rich in habitat for freshwater gastropods.  So I was mildly surprised to see that our buddy Bruce’s list extended to N = 31 species, from three primary (and hoary!) sources: Tryon 1866, Aughey 1877, and Walker 1906, a scattering of more recent references, and the collections at the University of Nebraska Sate Museum [2].

Actually, the starting number of species exceeded 80.  The biggest challenges faced by our good buddy were the pruning of over 40 synonyms from the 19th-century taxonomy, and the weeding of around 8 - 10 valid nomina apparently introduced to the fields by error.  The taxonomy of the 31 species that emerged from Bruce’s intensive efforts with hoe and hook was neat, clean, and modern [3].

Loyal followers of this blog may remember my post of 20Apr06, entitled “Surveying the Heartland” [4].  That essay was prompted by our good friend Tim Stewart’s review of the freshwater gastropods of Iowa, very similar in scope and methodology to the present work by Bruce Stephen.  And in my post of 23Jan09, I compared the (46 species) fauna of Iowa to that of Indiana in the east and Missouri in the south, identifying 20 species shared by the three boxy Midwestern states, 15 uniquely shared with the former and 6 uniquely shared with the latter [4].

The FWGNA readership may also remember my post of 26Nov08 reviewing a popular guidebook on the freshwater gastropods of Colorado, based on the (1989) work of Shi-Kuei Wu [4].  So with the publication of the present review of the Nebraska fauna, we have available an unbroken transect, extending 1,000 miles from the banks of the Mississippi River at Davenport, across the Great Plains and over the Rocky Mountains to the Colorado River at Grand Junction.

Should we expect to discover that any of our buddy Bruce’s 31 species are unique to Nebraska?  Or might we find the Nebraska fauna perfectly transitional between those of Iowa and Colorado?  The figure at left is a Venn diagram of boxy western states, composed using the same convention I pioneered in my essay of 23Jan09.  The areas of the states are adjusted relative to their freshwater gastropod faunas – the 44 species documented from Iowa [5] rendering it over twice the size of Colorado (with 20 species, ref. 6), Nebraska in the middle.

And we do indeed see a rather smooth malacological transition (perhaps “attenuation” would be more descriptive) moving west from the relatively rich fauna of Iowa to rather poor Colorado.  Setting aside the 16 cosmopolitan species shared by all three states, Nebraska shares 12 uniquely with Iowa and just one with Colorado (Lymnaea bulimoides).  But again perhaps surprisingly, Nebraska does seem to boast two freshwater gastropod species found in neither Iowa nor Colorado: Physa pomilia and Gyraulus crista.

Our buddy Bruce was a bit dubious about the Physa pomilia records, as am I.  The 15 records from S-K Wu (2004-05) predate our modern understanding of the taxon [7].  But the single G. crista record (from Taylor 1960) appears to be bona fide, this (rather boreal) species being documented from Wyoming to the northwest.

Science is the construction of testable models about the natural world.  This definition I am in the habit of repeating once a week to my Genetics Lab 305L students, 14 weeks per semester.  Historical reviews such as the work just published by our buddy Bruce Stephens serve the important function of providing models, which we malacologists of the present day really ought to test.  The job most certainly is not over in Nebraska, or in Iowa, or indeed in most of the United States of America, sea to shining sea.  But it is well begun.

[2] The author’s online queries of the collection databases at the USNM, ANSP, UMMZ, and several museums of more regional character field to yield a single freshwater gastropod record from Nebraska.

[3] Well, there are a couple smudges here and there, but I won’t quibble.

[4] My previous posts relevant to the biogeography of Western and Midwestern states, in order of appearance, have been:
[5] The fauna of Iowa has decreased by two species in nine years, due to taxonomic progress.  The lymnaeid nomen emarginata now seems to be a junior synonym of L. catascopium, and the ancylid nomen parallela a junior synonym of F. rivularis.