We should begin this essay by reminding our readership of the very precise (and perhaps rather peculiar) definition of the adjective “rare” adopted by the FWGNA project, as developed in our essay of last month [1].  We have defined a species as “rare” if the number of samples in which it has been recorded ranks it in the lowest 25% of all species in the fauna under study.  We call this “incidence rarity,” to distinguish it from “abundance rarity,” which is the other way in which rareness is commonly defined [2].

We should also remind our readership that in the present discussion of rarity we have been led by a prominent authority of the subject, Prof. Kevin J. Gaston.  And point out that immediately after Prof. Gaston concluded sections 1.1 and 1.2 of his 1994 book [4] on the definition of rarity, he set his pen to several sections on scale-dependence, and the methods by which a biota might be circumscribed for study.  Because the first explanation for the phenomenon of rarity that occurred to Prof. Gaston was, in his own words, that:

“at local and regional scales, many (species) are not permanent members of the assemblage, do not breed, or do not have self-sustaining populations in the area of interest.  Such species have been variously termed accidentals, casuals, immigrants, incidentals, strays, tourists, transients and vagrants; I shall refer to them as vagrants.”

Prof. Gaston then went on to describe what he termed “the problem of vagrancy.”  Vagrants are typically over-represented in the fraction of the biota that workers in the field identify as “rare.”  Most of the bird species regarded as rare in Britain are vagrants, for example.  But such vagrants are (quite often) not rare elsewhere.  They are what Gaston calls (later, in Chapter 2) “pseudo-rare.” 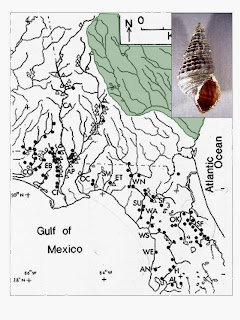 The data we have gathered for our “Synthesis” of freshwater gastropod incidence in the Atlantic drainages of nine US states [5] do indeed demonstrate a phenomenon rather closely analogous to Gaston’s “problem of vagrancy.”  Our database contains only 4 records of Pleurocera floridensis, for example, ranking P. floridensis well down in the bottom quartile of the 67 freshwater gastropods listed in Table 1 [6].  But there is strong (albeit indirect) evidence suggesting that P. floridensis populations are not rare elsewhere.  The distribution map of S. M. Chambers at left [7] shows almost 100 populations of P. floridensis (as black circles) in the springs and rivers of western Georgia and Florida.

Pleurocera floridensis is not a “vagrant” as Gaston has defined that term, however.  Populations of pleurocerid gastropods do not blow in and out of our study area like birds [8].  And there is no reason to think that the 4 populations of P. floridensis we have documented (shown as green circles above) are not permanent or “self-sustaining.”  Rather, the reason that that P. floridensis appears rare in Table 1 but almost certainly is not actually rare is that our study area (green) has (by chance) only touched the northern edge of the P. floridensis range.  Pleurocera floridensis is not (literally) a “vagrant,” it is “peripheral.”

So our fauna of 67 freshwater gastropod species includes 34 demonstrating incidences below the median of 23 records in our database.  To determine which of these 34 are peripheral in our study area will admittedly require some speculation on our part, because no data are available from outside our study area comparable in quality to those available inside.  But based on our reading of the literature [10] it would appear that exactly half – 17 – are peripheral.  Although Table 1 shows that these 17 species demonstrate below-median incidence in our study area, the published literature contains evidence suggesting that they may demonstrate above-median incidence elsewhere.

That subset of 7 peripheral species appearing in the bottom quartile of Table 1 are, to borrow Gaston’s term, “pseudo-rare.” And here is another remarkable insight brought to us by the good Professor Gaston.  There must also exist a condition he calls “non-apparent rarity,” which is the situation where species are indeed rare, but their rareness is not revealed in the data available.  Non-apparent rarity is the opposite of pseudo-rarity.  And:

To summarize.  All 10 of the species marked in Table 1 as I-1 and I-2 (simply, without a suffix of “p”) are most certainly rare.  The 7 species marked I-1p and I-2p are pseudo-rare.  Then moving up Table 1, the 7 species marked I-3* demonstrate non-apparent rarity, deserving to have been ranked in the bottom quartile, but displaced by the 7 peripheral species occupying their spots.

I hate to draw a line here, but (once again) I sense I may be nearing the maximum length this peculiar format can comfortably contain.

I will close by noting, however, that we have barely “touched the periphery” of the question we have undertaken to address, the “why” of rarity.  The second explanation that occurred to Prof. Gaston, actually better described as a class of explanations, would be sampling error.  Species may appear rare because they are small or cryptic, clumped or aggregated, undersampled by the gear, and so forth.  The related sins of "conservation-biased oversampling" [11] and trash-snail undersampling occurred to me as I read this section of Gaston's book.

Professor Gaston does not begin to explore the causation of bona fide rarity until Chapter 6, which he divides into two subsections:  “environmental factors” and “colonization ability.”  And it is not until page 126 (in 163 pages of text) that it occurs to Prof. Gaston that human activities might have some effect on rarity, or that rarity might be anything other than a perfectly ordinary phenomenon of nature.

Yes, rare species are more likely to become extinct than common species.  And it is toward the subject of conservation that Prof. Gaston ultimately turns, in his Chapter 7.  But as he does so, this is his observation:  “Considerations of rarity lead almost ineluctably to the topic of conservation.  Indeed, it seems a popular belief that the two issues are inseparable.  Previous chapters should have established beyond any doubt that this is not so.”  Amen.

[2] Actually there is a third way in which rarity can be understood – high habitat specificity.  This sets up a 2x2x2 classification by geographic range, local population size, and habitat specificity, with eight cells in the box.  Only species in one of these cells (demonstrating a wide range, large population sizes and low habitat specificity) will be considered common by everybody.  The other seven cells contain species that are rare, in some sense [3].  See Rabinowitz, A. B. (1981) Seven forms of rarity.  Pp 205 – 217 in “The Biological Aspects of Rare Plant Conservation” (Ed. H. Synge) Wiley, NY.

[3] Honestly, it is very easy to explain why species are rare.  The more difficult question would be “Why is anything common?”

[8] Which is not to imply that aerial dispersal of freshwater gastropods is unimportant!  See [17Nov05]

[11] Toward the Scientific Ranking of Conservation Status - Part III [19Mar12]
Posted by Rob Dillon at 4:38 PM No comments: