Megapetitions of the Old West


There's a new posse riding the plains, and they're aiming to make the American West safe for all its law-abiding citizens, including the malacological ones. And on their hips, they're toting sawed-off scatterguns.

The Center for Biological Diversity (CBD) is celebrating its twentieth anniversary this year. There's a beautifully-formatted booklet available for download from their web site packed full of dramatic tales such as "A bare-knuckled trio takes on Big Timber" and "Sprawl Showdown." With a main office in Tucson, and field offices in eight other states, their staff of 60 (including 17 lawyers) works "to secure a future for all species, great and small," with a "vision and a solar-powered fax machine.

"Their efforts thus far have been impressive. In recent years CBD gunslingers have prevailed in shootouts over Pyrgulopsis roswellensis, Juternia kosteri and Assiminea pecos in New Mexico, as well as P. morrisoni in Arizona. Their web site (accessed 10July09) catalogues 86 listing petitions, 5 critical habitat petitions, and 9 species status reviews along with scores of "research papers."

The 2008 volley, weighing in at 85 pages, proposed 17 freshwater snails of three familes for protection: 14 hydrobiids (11 Fluminicola, 3 "Lyogyrus"), 2 pleurocerids (Juga), and one planorbid (a Vorticifex), as well as 15 land snails of diverse groups. The taxonomy was a complete mess, and the document an embarrassment (1). The causes of three valid species (Fluminicola seminalis, F. potemicus, and Colligyrus convexus) were buried under the weight of 14 spurious taxa proposed in various unpublished reports by the late Terry Frest. I hope that the poor FWS biologist sitting behind the desk on which this dead coon is currently stinking can find it in his heart to forgive us. 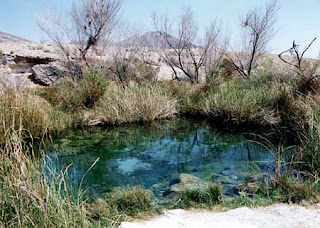 So the 2009 petition, tipping the scales at 133 pages, could only be better. The 42 hydrobiid species it proposes for protection include 37 Pyrgulopsis and 5 Tryonia, all endemic to single springs or sets of springs in Nevada or closely adjoining regions (For example, the spring at Point of Rocks figured above, in the Ash Meadows National Wildlife Refuge, NV). All 42 species have been recently monographed by (in fact, mostly described by) Bob Hershler (2). I don't have any personal experience in this part of the world, but from my seat on the corral fence, if these diminutive citizens of the Old West don't need a bit of protection, I don't know who does.

The advantage of a megapetition approach ought to be in speed and efficiency. The 2009 petition features just one (collected) section entitled "Natural History and Ecology" for the entire list of 42 species, and I think this is justifiable. Treating all these populations together where possible ought to yield substantial savings in time and manpower for the CBD to research, and the FWS to process - savings which should translate into quicker results.

But on the downside, weakness in any element of a megapetition may translate to the whole. It's hard to sell a bag of 17 apples and 15 oranges, when 14 of the apples are rotten.

Both the 2008 and 2009 petitions called the attention of the Secretary of the Interior to laws "placing definite response requirements on the FWS and very specific time constraints on those responses." Apparently federal regulations require that the FWS respond to petitions such as these in 90 days. Well, I don't think anybody actually expected that to happen. The FWS simply does not have the staff or the expertise to evaluate documents of this heft at time scales marked in days. I understand that it generally requires a minimum of 15 months to obtain a 90-day finding, 15 months being the earliest point at which a "timeline suit" can be filed.

So it looks like our little snails will be holding off the development desperados by themselves a little bit longer. In the meantime, we'll keep an ear to the rail, and an eye toward the sunset.

(1) I am not criticizing the CBD here. Their proposal can only be as strong as the science on which it is based.