Bryant Walker was a lawyer.  It is difficult for us to comprehend, looking back on his distinguished career in malacology, which extended over 50 years and 155 publications, that he never held a formal position at any scholarly institution.  And that the second word under Walker’s entry in R. Tucker Abbott’s Directory of American Malacologists [1], after the word lawyer, is “amateur.”

He was born in Detroit in 1856 and died in Detroit in 1936, and will ever be linked most closely with his alma mater, the University of Michigan.  Indeed 25 of Walker’s 155 publications were regional surveys – directed toward the molluscan fauna of the Wolverine State [2].  But he corresponded widely throughout North America, developing especially close friendships with Ortmann in Pittsburgh, Pilsbry in Philadelphia, and such prominent collectors as J. H. Ferriss, A. A. Hinkley, and H. H. Smith.  And he became an international authority on freshwater limpets, publishing important contributions on the ancylids of South America and Africa, as well as revising our own continental fauna here at home [3].

According to Calvin Goodrich [4, 5], whom he recruited to the University of Michigan in 1929, the first entry in Walker’s personal catalog of shells was “made in the back part of a university notebook on physics” in 1874, while he was yet an undergraduate.  He published his first paper in the year of his graduation from Michigan with an A. B. in 1876, and his second paper the year he graduated from the Michigan Law School in 1879.  Thereafter he entered private practice as an attorney in Detroit, turning his “three-storied, high ceilinged, mansard-roofed house” into a museum, “the ground floor dedicated to gastropods, the upper to bivalves.”  Again according to Goodrich, “When the collection was moved in June [of 1936] to the University of Michigan at Ann Arbor, a great pile of boxed shells was discovered in the attic rooms, others on shelves in the basement where some were partly buried under coal.”

Walker’s research interests favored the freshwater gastropods (56 papers), but did not neglect the unionid mussels (29 papers).  In his day he was probably best known for the “Mollusca” chapter he contributed to the first (1918) edition of Ward & Whipple’s influential “Freshwater Biology.”  He expanded that work into a stand-alone “Synopsis of the Classification of the Freshwater Mollusca of North America,” augmented it with “A catalog of the more recently described species, with notes,” and published it as a 213-page “Miscellaneous Publication” of the University of Michigan [6].

I keep a reprint of Walker’s 1918 “Miscellaneous Publication” on the shelf next to my desk, and refer to it often.  The work grew from an extensive system of note cards that he compiled for his personal use over many years, recording not just the descriptions of new species as they were published, but indeed any note or comment regarding any species of North American freshwater mollusk to appear in the literature over several decades.  In cases such as the Physidae, where no monographic treatment was published between Binney’s of 1865 and George Te’s of 1975, Walker’s “Miscellaneous Publication” provides an indispensable bridge from the ancient to the merely old.

Bryant Walker had a lawyer’s sense of fairness.  As the 20th century dawned, the larger and showier freshwater gastropods, such as the lymnaeids, the planorbids, and especially the pleurocerids, had all received more than their fair share of attention.  Thus he focused his research efforts on the smaller and plainer taxa – the hydrobiids, the valvatids, and especially the ancylid limpets.

Among the hydrobiids, the plainest genus is arguably Somatogyrus, which bears a relatively heavy but otherwise nondescript shell and a simple penis.  All the other hydrobiid groups – the Amnicolines, the Nymphophilines, the Fontigentines – have an elaborate penial morphology with accessory lobes and glandular crests and extra ducts and were already, by Walker’s day, split into scores of regional species.  It did not seem fair to Walker that there should be dozens of species of Amnicola in New England, and hundreds of species of pleurocerids in Alabama, but just four species of Somatogyrus, simply because they were so plain.

So in 1904 he described 11 new species of Somatogyrus, including the regional taxa S. pennsylvanicus, S. virginicus, and S. georgianus, as well as 8 species from the Mobile Basin of Alabama [7].  And between 1906 and 1915 he described 14 additional species, most from the Tennessee River and its tributaries in North Alabama [8, 9, 10]. 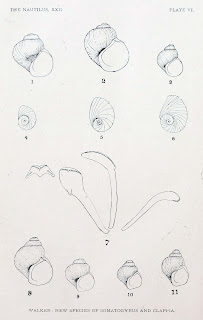 Almost all 25 of these species were, quite plainly speaking, indistinguishable.  Walker described the shell of Somatogyrus virginicus, for example, as “small, globosely conic, and imperforate,” and that of S. pennsylvanicus as “small, obtusely conic, narrowly umbilicate, sometimes imperforate [7].”  The only exception was his Somatogyrus umbilicatus from the Coosa River of Alabama, about which Walker enthused, “This species is remarkable for its depressed, valvata-like form and round, deep umbilicus, which readily differentiates it from all other known species of the genus.”

By 1909 it was beginning to seem unfair to Walker that the genus Somatogyrus should include 21 indistinguishable species (by that point, see note 11) and one that looked different.  So he removed his S. umbilicatus to a separate genus, Clappia, and redescribed it as Clappia clappi, to doubly-ingratiate himself with G. H. Clapp, then curator of mollusks at Harvard’s MCZ [Plate above, see ref 9].  The genus remains valid to this day, although the specific nomen “clappi” was dead aborning [12].

It was Calvin Goodrich’s opinion, however, that Walker’s 25 papers on the Ancylidae “will probably stand as his best work.”  While essentially all of the 16 species-level ancylid taxa he described from North American waters have now disappeared into synonymy [13], Walker's genera Ferrissia, Laevapex, and Rhodacmea survive to this day, albeit with approximately one species each [14].

But with the advantage of 100 years’ perspective, I would suggest that Bryant Walker’s best work was “Malacology at the University of Michigan.”  If there was any interest in mollusks at Ann Arbor prior to Walker, I can find no evidence of it [15].  But after Walker came Goodrich [5], and after Goodrich came van der Schalie, and under van der Schalie trained W. J. Clench, A. R. Solem, P. F. Basch, J. B. Burch, W. H. Heard, and many, many others, including (full disclosure) my own Ph.D. advisor, G. M. Davis.

Absent the Malacology Department at the UMMZ, the landscape of our discipline in America today would present a far more desolate aspect.  Although I have never seen him accorded the honor, let’s bestow upon Mr. Bryant Walker, lawyer, amateur, the title “Father of Malacology at Michigan,” shall we?  It’s only fair.

[4]  All the anecdotes in paragraph three of this essay come from a very sweet and personal obituary published by Goodrich (1936) in Nautilus 50: 59-64.

[5] Calvin Goodrich ranks very high on my list of professional heros, just behind Darwin, Mendel, and Morgan.  For my personal tribute, see:

[11] Actually there were approximately 30 species of Somatogyrus by 1909, including 8 described by authors prior to Walker.

[12] The specific nomen "clappi" (Walker 1909) immediately became a junior synonym of umbilicata (Walker 1904).  How did the great H. A. Pilsbry, who edited The Nautilus from 1889 to 1958, let Walker make the rookie mistake of naming the same species twice?

[13] The only exception may be Rhodacmaea hinkleyi (Walker 1908), which even if it is distinct, is probably extinct.

[14] I have posted updates on all three of these genera in recent years:


[15] The first curator of malacology at the University of Michigan was Miss Mina Winslow, whom Walker had some hand in “encouraging” to the job, according to van der Schalie (Bulletin of the AMU 1980: 1 – 5).  I cannot discover when Miss Winslow actually assumed her position, but the date of her first “Occasional Paper” was 1917, a couple years after Walker’s first.
Posted by Rob Dillon at 9:39 AM No comments: