What I Thought I Knew About Goo


Editor's Note.  This is the final essay in my four-part series on the egg masses of pulmonate snails.  But this was not to be the end of research interest in enigmatic, string-like gelatinous masses of bright green embryos.  Mr Trevor Vanatta, whom you will meet in paragraph #4 below, continued to work on the question through the field season of 2015, and by September had obtained some rather definitive results.  See Tom Pelletier's blog of 19Dec14 for the (absolutely!) last word.

When I posted my first essay on the egg masses of pulmonate gastropods [1] way back in September, I imagined that I was embarking on a very short series, offered as a service to the larger community of generally-trained aquatic biologists and interested amateurs who might be googling about the internet, trying to identify gelatinous blobs.  I had no idea that the series would extend into the New Year, and turn into a parable plumbing the depths of our collective ignorance regarding fundamental aspects of the biology of even the most commonplace bugs and slugs in the most mundane environments.  Or that I would expose my own personal hubris to imagine that I am somehow exempt from the folly.

In the second installment of this series, I presented evidence from Quebec suggesting that the large pulmonate gastropod Lymnaea megasoma might lay string-like gelatinous egg masses of bright green embryos.  But in my third installment, I was forced to conclude that photos depicting string-like gelatinous egg masses of bright green embryos from Maine and Nova Scotia did not illustrate the egg masses of L. megasoma.  I shared my jpeg correspondence with Mr. Tom Pelletier of askanaturalist.com, who sent me the initial photos from Maine and Nova Scotia in June, and then followed up with additional photos showing a cloud of fuzzy specks emerging, decidedly unmolluscan in character.  Mr. Pelletier hypothesized (at the time) that those specks might represent the larvae of a chironomid midge.  One might think that this would conclude the matter.

But just as I was placing a period at the end of my third installment in November, I received yet another email from the extraordinarily conscientious Mr. Pelletier, containing yet another set of jpeg attachments which would call into question even that tiny little bit I thought I knew about goo.

In late November Mr Pelletier introduced me to Mr. Trevor Vannatta, a graduate student working on a parasitological survey at the University of Minnesota in Duluth.  And Mr. Vannatta, by happy fortune, had spent his summer collecting a variety of local lymnaeid snails, including L. megasoma.  And at some point during captivity, possibly as a consequence of shifting into the refrigerator, one of Mr. Vannatta's L. megasoma laid an egg mass in the Petri dish in which it was contained. 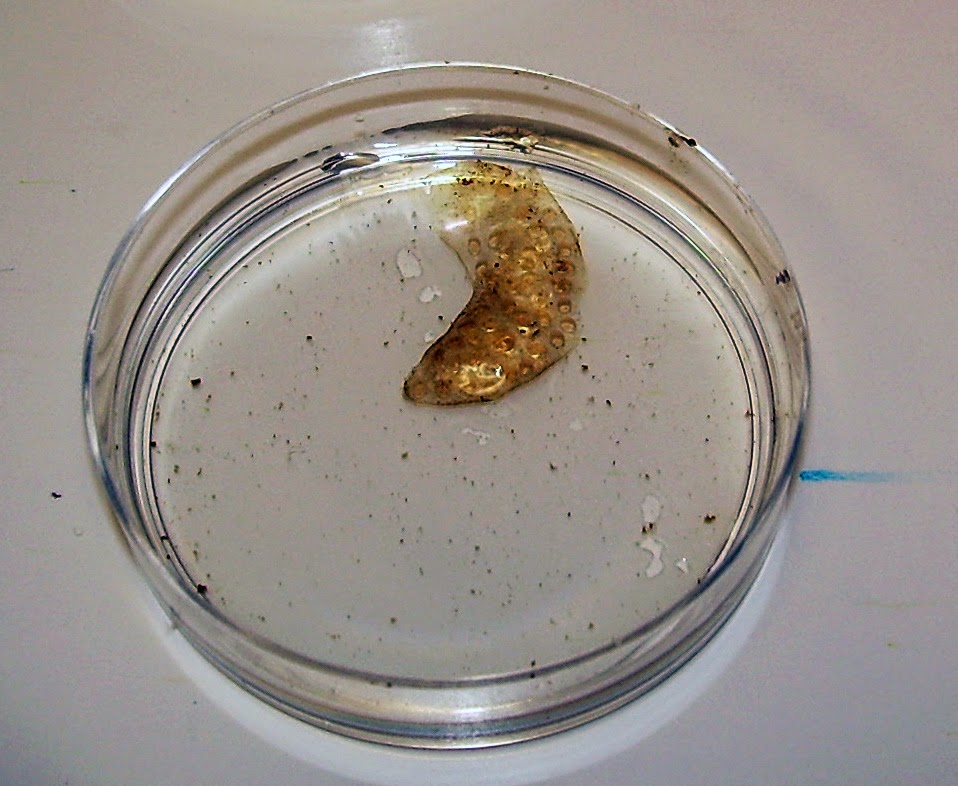 It is hard to imagine anything less string-like than the gelatinous mass shown above.  The bona fide L. megasoma egg mass depicted in Mr. Vannatta's jpeg attachments, as forwarded by Mr. Pelletier, is large but otherwise indistinguishable from typical lymnaeid egg masses of the sort we figured back in September.

Is it possible that L. megasoma lays dimorphic egg masses, stringy-green in lakes and flat-typical in Petri dishes?  At 15 cm, the Quebec egg masses we depicted in October do still seem significantly larger than the insect masses we illustrated in November.  In any case, the egg mass morphology of L. megasoma needs confirmation.

And meanwhile, I have found some consolation [2] watching from the CC line as our hero, Tom Pelletier, has continued his mighty struggles to figure out exactly what did lay those gelatinous masses of bright green embryos from Maine and New Brunswick we featured in November.  After exploring the chironomid hypothesis at great length he ultimately turned to a caddisfly hypothesis, specifically large-bodied species of the genus Phryganea or Agrypnia, which lay egg masses in loops, rather than linear strings [3].  Mr. Pelletier posted his essays #2 and #3 on the entomological side of this gooey mystery at askanaturalist.com in mid-December, which make most interesting reading, from the links below [4].

What has stricken me through this entire 5 month and 4 + 3 = 7 essay saga is the insularity of all the research communities involved.  Not only are we freshwater snail people completely ignorant regarding the egg masses of aquatic insects, I don’t think the caddisfly community is especially aware of the chironomid midge community, and vice versa.   And I don’t think that the algal symbiosis community knows anything about any of us.

In November I cited a 1994 paper on the symbiotic association between algae and amphibian egg masses authored by Pinder and Friet.  A couple of excellent works [5] have been published more recently, however, including a very thorough review by Kerney in 2011.  And although the algae/amphibian symbiosis seems to have attracted a great deal of attention over 120 years of study, the (identical? analogous?) symbiotic association between algae and aquatic invertebrate eggs (of all sorts) seems to have remained completely undocumented in the primary literature.

Is the same algal species, generally identified as Oophila ambystomatis in frog and salamander eggs, involved in all these symbioses, invertebrate and vertebrate?  How do the algae become so tightly associated with all these diverse embryos, inside their diversity of gooey matrices?  And is the symbiosis mutualistic in all these cases?  Obligately?  And why do we spend billions of dollars bouncing satellites off comets when such profound mysteries quietly float at the end of the docks in our own backyards?  Mystery on top of wonder, upon wonders.

[1] Our series thus far:
[2] Perhaps this is schadenfreude.  I confess.

[3] These large, gelatinous egg loops are typically attached to debris and vegetation several feet below the surface of northern lakes.  But wait, don’t adult insects have wings?  Are female caddisflies diving into cold, northern lakes like cormorants?  Wonder on top of wonders.