Albinism and Sex Allocation in Physa

Last month we reviewed, in personal and anecdotal fashion, the events leading up to (what has turned out to be) a thirty-year research program on the North American Physidae [1].  And when we left the story, in the summer of 1989, the entire second floor of the College of Charleston Science Center was in danger of being overwashed by a sea of 10 oz disposable cups of snails.

On July 25, 1989, our good friend and former student Amy Wethington wrote this in her research notebook: “Found albinos (or what at least thought was albinos) in the following cups.”  She then went on to list six culture vessels, some prefaced by the number 15, others prefaced by the numbers 27 and 29.

The snails were entirely unpigmented, body and shell, with unpigmented eyes.  Amy’s discovery opened an entirely new research direction for us, which extended over ten years and ultimately yielded her MS degree from The College and six papers in peer-reviewed journals.  These papers were not directly relevant to the question that had nagged me since my high school days, the actual identity of the snails now covering every square inch of benchtop in the College of Charleston genetics lab.  But they armed Amy and me with important insights into the biology of our study organism – insights that would become vital as our research program unfolded.

Pop quiz everybody!  What is a complementation test?  Most of you probably heard that term in your undergraduate genetics class, and figured you’d never need it again.

A complementation test is a genetic cross conducted to determine whether phenotypic variants are allelic.  So for example, Amy had discovered albinos in three different lines of Physa, each founded by single isolated females collected some weeks previous from a neighborhood pond – Number 15, Number 27, and Number 29.  In late August, she found albinos in isofemale line Number 7 as well.

Are all of these snails albinistic for the same reason?  In other words, do they all have mutations at the same step in the biochemical pathway leading to pigmentation?  Then the best hypothesis would be that they are all “allelic,” homozygous recessive for alleles at the same locus.  Or might they have mutations at different steps in the pigment pathway?  In which case they are non-allelic; more than one locus is involved. 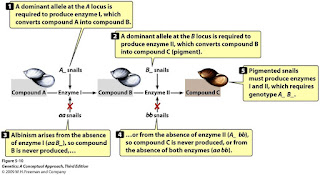 So Amy was ultimately able to develop pure albino cultures from all four isofemale lines: 7, 15, 27, and 29.  And by the time school was starting again in the fall of 1989, we had begun our complementation tests.  And – how cool is this – one of those lines turned out to be fixed for an albinism gene different from the other three.  When we crossed line-7 albinos with any other albino culture, they “complemented” each other – we obtained wild-type F1.

And here’s another little dose of your old genetics professor kicking in. During the second week of my Junior-level Genetics class, we review the phenomenon of epistasis – where one locus masks a second.  When Amy and I intercrossed the F1 offspring from our 7 x 15, 7 x 27, or 7 x 29 hybrid lines, we obtained a 9:7 ratio of pigmented to unpigmented F2, the classic signature of reciprocal recessive epistasis.  Amy and I published that paper in the Journal of Heredity in 1992 [2].

I’ll never forget the morning in the fall of 2002, ten years later, when a colleague brought a copy of the brand new textbook by B. A. Pierce, Genetics: A Conceptual Approach, into my office.  Pierce had selected our results on albinism in Physa to illustrate the concept of epistasis.  Just to see the diagram reproduced above, reproduced as Figure 5.10 in a genetics textbook used by thousands of college students, was the biggest thrill I have ever enjoyed with my pants on.

Amy and I used the albinism genes as tools to study a broad swath of reproductive biology in Physa, ultimately yielding the papers footnoted [2] through [7] below.  The most interesting study, I think, is the one on protandric hermaphroditism which we published in the Proceedings of the Royal Society in 1993 [3].  The experimental setup was as clever as I can get.

Imagine two individual Physa fixed for albinism at different loci – call one “7-experiment” and the other “29-challenge.”  The 7-experiment snail is a mature adult; he has been reared in isolation, and is now self-fertilizing, yielding (of course) albino progeny.  The 29-challenge snail is a hatchling… maybe just a couple weeks old – still very juvenile. 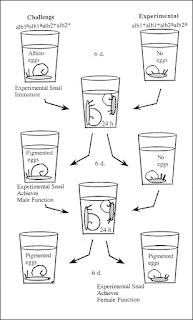 The experiments that Amy and I conducted according to this design ultimately showed that Physa are “protandric hermaphrodites.”  Male reproductive maturity was reached at mean age of 5.7 weeks in our culture conditions, with female reproductive maturity added at a mean age of 7.3 weeks.  And reared in isolation, our Physa delayed self fertilization to a mean age of 22 weeks; certainly at a significant cost to fitness in the wild.

At our sample sizes we were also able to detect low frequencies of all sorts of wonderful reproductive variance, including autosterility, outcross male-sterility, outcross female-sterility, and outcross double-sterility.  Although most snails matured first as male and then as female, we discovered a few cases of simultaneous development, a couple female-first snails, and some snails that passed through brief periods of self-fertilization before outcrossing as females.  It’s amazing that anybody knows this.  Or cares, come to think about it.

We completed several other interesting studies involving those complementing albino lines from 1990 to 1992, when Amy graduated and left Charleston - our (1996) study of gender choice and gender conflict (Amy’s MS thesis, footnote 5) and our (1997) estimates of lifetime fitness and inbreeding depression [6].  And we still had at least one or two cool experiments mapped out on the Genetics Lab chalkboard.  But alas.  After a couple years in culture, all our albino lines seemed to quit outcrossing.  And by the mid-1990s, they had died out, victims of inbreeding depression, I feel sure.

But a couple nice young undergraduate students and I published one last albino paper in 2005 [7], which I still remember with considerable fondness.  Walking along the edge of our pond at Charles Towne Landing in September of 2002, I happened to discover an adult albino Physa – the first I had ever seen in many years of observation.  Assuming (what must be) a very low background frequency of albinism in the wild population, it is reasonable to guess that that this single albino snail had already been wild-inseminated by a homozygous pigmented partner.

All the experiments we had done in the previous 10 – 12 years had involved lab lines in culture.  So Tommy McCullough and Charles Earnhardt and I isolated this single snail, whom the students named “White Fang,” in a 10 oz cup [8].  She laid 109 eggs over the next week, which hatched into 30 viable pigmented offspring, and 6 albinos.  We advanced her to a second cup and got similar results.  And so forth, on until February of 2003, when White Fang finally went up to Fort Yukon.

Totaled over our 20 weeks of observation, White Fang laid 1,566 eggs, which hatched into 550 viable hatchlings, of which 35 were albinos, for an effective self-fertilization rate of 6.4%.  This is the best estimate of self-fertilization in any (mixed-mating) population of pulmonate snails of which I am aware [9]. 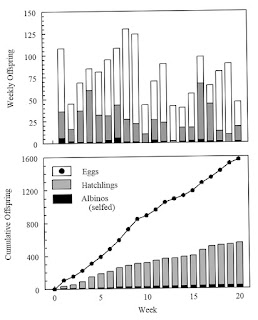 And as of week 20, White Fang was still laying pigmented and albino eggs at the same frequency that she was producing them at week 1.  Finally we had answered the sperm-storage question that had prompted this entire research program, back when Amy and I got our start in 1989.  Arbitrary adult Physa sampled from wild populations apparently do not ever run out of allosperm, even if isolated.  They are inseminated for life.

Well, by 2005, our Physa project had diverged in all sorts of fresh directions.  Which brings us back to the main theme of this series of essays.

Notice that in all those papers Amy and I published using our albino lines in the 1990s, we were still referring to our study organism as “Physa heterostropha pomilia.”  But by 2005, White Fang was identified as an individual “Physa acuta.”  What happened?  To be continued!

[8] Had one of the undergraduates recently read Jack London’s (1906) novel?  I don’t know.  But I am pretty sure that the name “White Fang” was supposed to be ironic.

[9] Yes, two undergraduates and I got a paper published in an international journal with 20 plastic cups, a teaspoon of fish food, and one, single snail.  You really don’t need big grants to do good science.  You don’t need any money at all.  That’s what I have always told myself, pretty much every year over my entire career, as my grant proposals have been rejected.