The Cryptic Pleurocera of Maryville


Editor's Note.  This is the first installment of a three-part series on the discovery of a cryptic pleurocerid species in East Tennessee.  The present essay was published in the FMCS Newsletter Ellipsaria 18(2): 15 - 16 [pdf] if you're looking for something citable.


"endless forms most beautiful and most wonderful have been, and are being, evolved."

I like to imagine that, as Charles Darwin wrote the poetic final clause of his masterwork, he may have been gazing over some well-curated systematic collection of molluscan shells [1].  Shells are captivating things, aren’t they?

This month’s installment in my long-running fascination with The Shell began in 2007, when I first glimpsed the phenomenon we ultimately christened “cryptic phenotypic plasticity" [2].  Using a survey of gene frequencies at a pair of highly polymorphic allozyme-encoding loci, John Robinson and I had just discovered that the pleurocerid populations we were identifying as Goniobasis acutocarinata, Goniobasis clavaeformis, and Pleurocera unciale on the basis of their strikingly different shell morphologies apparently constituted a single biological species [3].  Our samples had come from Indian Creek, a tributary of the Powell River on the Virginia/Tennessee line.  And I was curious to see if these intriguing results might extend generally through East Tennessee and into North Georgia, implying that the shell morphological distinction historically used to distinguish the pleurocerid genera Goniobasis/Elimia from Pleurocera might have no heritable basis.

So I picked three fresh study areas – the Little River drainage in the vicinity of Maryville (TN), the Conasauga drainage east of Etowah (TN), and the Coahulla near Dalton (GA).  And from each of these three regions I sampled three populations from the acutocarinata-clavaeformis-unciale-carinifera continuum to analyze together with my original data set from the Powell drainage.  And from each of these (now four) regions I also needed a control – a population of some common, widespread pleurocerid that everybody recognizes, the specific status of which nobody doubts.

Populations of Pleurocera simplex are very nearly omnipresent in small streams throughout Southwest Virginia, East Tennessee, and North Georgia.  They are also rather distinctive, with their dark, smooth, teardrop-shaped shells and strikingly black bodies.  Thomas Say described “Melania” simplex in 1825 from “a stream running from Abingdon to the Salt Works, and from the stream on which General Preston’s grist-mill is situated, as well as in a brook running through the salt water valley and discharging into the Holstein River.”  The eighteenth-century salt mines to which Say must have been referring are still identifiable in modern day Saltville (VA), and (indeed) snail populations matching Say’s small figure and description still inhabit streams in the vicinity.  And Say’s nomen “simplex” is among the oldest names available for any American pleurocerid [4], so is in no danger of being synonymized under anything else.

I included two populations of Pleurocera simplex (as “Goniobasis simplex”) in the first allozyme study I ever published, way back in 1980 [5], and added five fresh simplex populations to control that 2007 gray-literature report with John Robinson I referenced to open the present essay, extending west from the Saltville type locality across the Holston, Clinch and Powell drainages of SW Virginia [6].  Clearly Pleurocera simplex would be the perfect control for my follow-up study of the acutocarinata-clavaeformis-unciale-carinifera continuum now extending south, through East Tennessee and into North Georgia.  Am I right?

And so it was that on 7May08, I came to stand on the banks of Pistol Creek in Courthouse Park, Maryville.  What a lovely little city is Maryville, Tennessee!  Spreading like a cool oasis between the county courthouse and historic Maryville College I found a shady park full of happy picnickers and laughing children.  And Pistol Creek is chock full of Pleurocera clavaeformis acutocarinata, which was the focus of my attention on that sunny spring afternoon, mixed with a population of good old familiar Pleurocera simplex, the perfect control.  I was probably there no more than 30 minutes.  In my field notes I wrote, “Very pretty spot!  Friendly girls drove me off.”

The genetic analysis would, of course, take somewhat longer.  I started running the gels for the study that was ultimately published as “Robust shell phenotype is a local response to stream size in the genus Pleurocera” [7] later that month, extending through the summer.  I pulled the first sample of 7 individuals from the bag labelled “Maryville simplex S6” on July 9, with another 15 individuals on July 11.  The PowerPoint slide below [8] shows photos of two of the nine gels I ran on 7/11/08 – one stained for octanol dehydrogenase (Octl), the other stained for octopine dehydrogenase (Octp).  The 15 Maryville simplex (labeled “S6”) were interleaved that day with ten simplex individuals from someplace else and six P. clavaeformis – don’t worry about those other 16 samples. 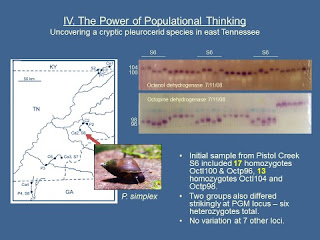 Much to my wondering eyes, the 15 “simplex” from Maryville S6 proved to comprise 9 homozygotes for Octl104 and Octp98, and 6 homozygotes for Octl100 and Octp96, with no heterozygotes in evidence at either locus.  There were also striking differences between the set of 9 and the set of 6 at the PGM locus.  I wrote in my lab notebook, “News Flash!!  There are TWO species inside Maryville S6.  Criminy!”

Over the course of the next several runs, the sample of 30 snails I had collected from Maryville on the afternoon of 7May08 ultimately proved to include 17 of the one species and 13 of the other.  And almost immediately an important follow-up question began to nag me.  Might there have been some subtle morphological difference between these two sets of snails I had initially lumped together as Pleurocera simplex?  What about the shells?  Were they absolutely indistinguishable?  Alas, I had cracked the shells and thrown them all away when I froze my “Maryville simplex S6” sample back in May, following my standard practice.

So in August of 2008 I returned to Maryville Courthouse Park for a second sample.  And on this second visit, I examined the shells much more critically.  Standing ankle-deep in Pistol Creek, I developed the impression that significant variation might exist in the simple shell proportions of the snails I had previously lumped together as P. simplex, particularly with respect to the relative heights of their body whorls.  Although the differences were slight – indeed negligible in juveniles and subadults – it seemed possible to me that the creek might be inhabited by an admixture of two snail populations with dark, smooth, teardrop-shaped shells and strikingly black bodies, one with “fat” shells and the other with “skinny.”

So, for the 71 Maryville snails I carried back to Charleston the next day, I measured the maximum shell dimension (or "shell height"), and body whorl height (B), defined as the length of the final 360⁰ of whorl, along the axis of coiling. I then defined apex height (A) as shell height minus body whorl height, and analyzed the relationship between body whorl height and apex height by analysis of covariance using the separate slopes model (JMP version 7).  I then classified my fresh sample of 71 individuals by their phenotype at 10 allozyme-encoding loci using standard methods.

A total of 20 snails proved homozygous for Oldh100, while 51 were homozygous for Oldh104, with no putative heterozygotes again in evidence. Differences were also very marked at the Opdh and PGM loci, although a few heterozygotes were observed in both groups.  The combined sample of 20 August snails plus 17 snails from the May sample showed Opdh96 = 0.946 and Pgm96 = 0.946, and the combined sample of 51 + 13 showed Opdh98 = 0.953 and Pgm102 = 0.852.  Again no variation was detected at the seven additional genetic loci examined. 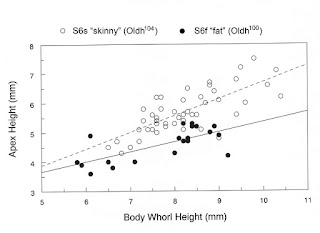 One of these populations must surely match Thomas Say’s bona fide simplex from that “brook running through the salt water valley and discharging into the Holstein River,” I should hope!  But which one?  And what might be the identity of the other population?  Tune in next time!

[2] I originally christened the phenomenon “Goodrichian Taxon Shift” in February of 2007, focusing entirely upon freshwater snails.  Stephen Jacquemin, Mark Pyron, and I broadened the concept into “cryptic phenotypic plasticity” in a (2013) paper we published in Hydrobiologia [PDF].  Most of the (now 17) blog posts filed under “Phenotypic Plasticity” in the blog index at right above touch upon the pervasive phenomenon of CPP in freshwater gastropod shells.  But see particularly:
[3] Dillon, R. T. & J. D. Robinson (2007b)  The Goniobasis ("Elimia") of southwest Virginia, II.  Shell morphological variation in G. clavaeformis.  Report to the Virginia Division of Game and Inland Fisheries.  12 pp.  [PDF]

Posted by Rob Dillon at 8:33 AM No comments: