Editor's Note.  This is the second in a series of four posts on the egg masses of freshwater pulmonate snails.  Almost everything written below turned out to be wrong, except that bit of paragraph #3 where I said, "that most certainly is NOT the egg mass of a lymnaeid snail."  I considered deleting this entire essay.  But it has occurred to me that, when read together with the contents of my posts of 11Nov14 and 8Jan15 following, the entire set constitutes a rather vivid illustration of the scientific method at work, with all its faults and failings.  So please do read the November and January installments of the series!

I characterized last month’s essay [1] as an “introductory course” in the egg masses of freshwater pulmonate snails.  That post featured photos and morphological observations comparing eggs and egg masses from typical representatives of the four major pulmonate families inhabiting the waters of North America.  This month we will explore “advanced topics.”

So in July of 2011 I received an email from Dr. Julie Moisan of the Quebec MDDEP [2] bearing the subject line “strange gelatinous mass.”  She inquired whether the image below might depict “gastropoda eggs (Lymnaeidae).”  She estimated the length of the mass as “3-5 cm” and was especially stricken (as was I) by the color of the embryos: 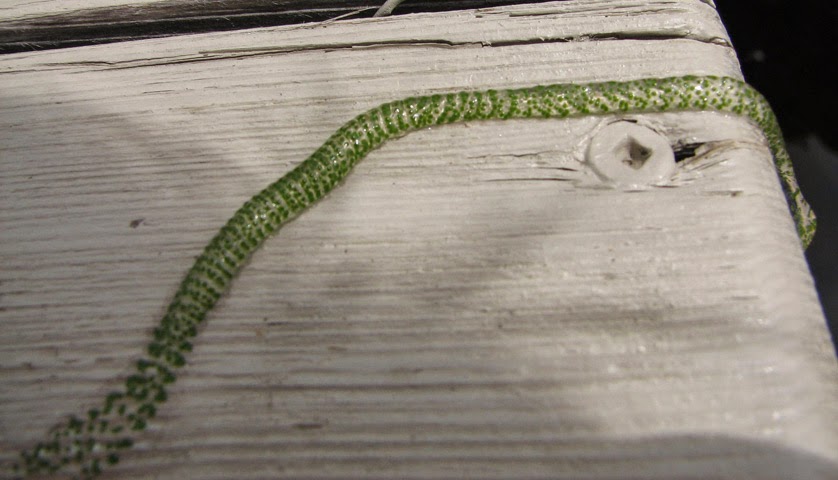 This was my reply: “No, that most certainly is NOT the egg mass of a lymnaeid snail, or indeed of any mollusk.  The mass is much too large, and each individual embryo is much too large.  And all the freshwater snails cement their egg masses firmly onto solid substrates.  And embryos are not green.”

My personal guess would have been amphibian eggs, but the herpetologist down the hall did not recognize the spawn depicted in that particular image either.  So ultimately I confessed my ignorance to Dr. Moisan, wished her luck, and sent her off with a request that if she ever did identify her strange gelatinous mass, to drop me another line for the sake of my own curiosity.

Imagine my great surprise (and not insubstantial embarrassment) when I opened a second email from Dr. Moisan in August 2011 containing the jpeg below. 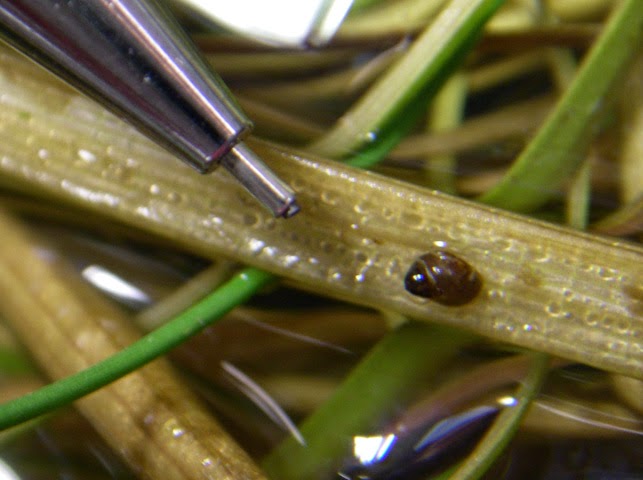 This is clearly a hatchling Lymnaea (Bulimnea) megasoma.  I have never personally seen a living L. megasoma on the hoof, adult or juvenile, although they were not uncommon in a batch of preserved samples I got from northern Wisconsin [3] a few years ago.  F. C. Baker [4] gave the range of the species as “Northern New England, west to Minnesota, Iowa and Manitoba; northern Ohio (latitude 41⁰) northward in British America to latitude 57⁰.”  Clarke’s [5] range map confirms Manitoba, Ontario, and Quebec.  Both Baker and Clarke report broad habitat usage for populations of L. megasoma within this chilly range, “In rivers, lakes, sloughs, and ponds.”  The observations sent to me by Dr. Moisan came from Lac Vaudray and Lac Labyrinthe in the Abitibi-Temiscamingue region of Quebec, about 48⁰ N.

Dr. Moisan also sent me several additional photographs of the egg masses in August 2011, together with some additional natural history observations. 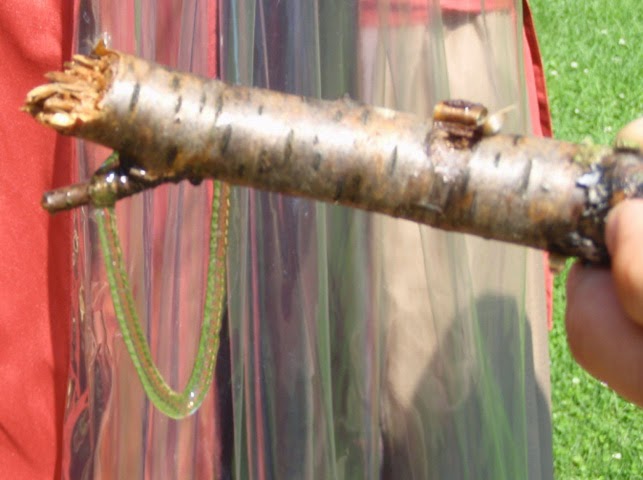 She estimated the egg mass depicted above at a whopping 15 cm length, and reported that such masses are typically attached to the substrate by their ends, to form a loop.  (I think her July estimate of “3-5 cm” may have been too low.)  She also reported that the embryos are not always green, but can vary in shades of black or brown.

This is all quite remarkable biology, but perhaps not difficult to rationalize, in retrospect.  The body mass of typical adult L. megasoma might indeed exceed the body mass of typical adult L. columella by an order of magnitude.  So an order-of-magnitude scale-up from the 11.5 mm L. columella that laid the typical (12.0 mm) egg mass we figured last month might reasonably yield the 15 cm gelatinous mass figured above. That’s my 11.5 mm L. columella at left, inspecting the (38.7 mm) shell of an L. megasoma from Wisconsin.

And what of the bright green color assumed by the embryos?  That must be chlorophyll a, which would seem to indicate a symbiotic association with algal cells, I suppose.  Is the symbiosis merely commensal – the algae finding a congenial home nestled safely inside the clear matrix of the pulmonate egg mass, the snail receiving nothing in return?  Or might the gastropod half of the association be receiving some mutualistic benefit as well?  It seems possible to me that the algae might provide oxygen to the developing embryos, in an otherwise potentially low-oxygen environment.  And possibly an initial source of food?  Is it possible that momma-snail actively provisions her embryos with an algal culture, which her newborn hatchlings might subsequently harvest for breakfast?

And aren’t we blessed to be biologists?  As far as I can determine, nobody has ever, in the history of malacology, described the egg masses of Lymnaea megasoma.  We biologists don’t need millions of dollars and superconducting supercolliders to push the boundaries of our science.  Off the end of a dock in rural Quebec, floating quietly, there lies the utter unknown.

[2] We gratefully acknowledge Dr. Julie Moisan of the Ministere du Developpement Durable, de l’Environnement et des Parcs in Quebec City for bringing this remarkable phenomenon to our attention, and for subsequently answering our repeated requests for additional information with great patience and care.