Editor's Note.  This essay was subsequently published as: Dillon, R.T., Jr. (2019b) The egg masses of freshwater pulmonate snails.  Pp 107-111 in The Freshwater Gastropods of North America Volume 2, Essays on the Pulmonates.  FWGNA Press, Charleston.

Like blobs of jelly.  Earlier this year, for example, I received an email from Mr. Tom Pelletier of askanaturalist.com, bearing the subject line “gelatinous mass.”  And the attached image was (pretty clearly) a Physa egg mass, sent to Mr. Pelletier by a correspondent who had photographed the underside of a river rock in West Virginia.  I was (of course) pleased to help Mr. Pellatier, and he wrote a very nice essay on the askanaturalist.com website [1], featuring a lot of excellent general information on the life history of Physa acuta, as well as photos and a couple video links as well.

So it has come to my attention that reliable information on the egg masses of freshwater pulmonate snails is a rare commodity on the web.  I tried a google search on a variety of terms and combinations, and was only able to find our colleague Kathryn Perez’ dichotomous key (which is good), but which features drawings, rather than photos, and might benefit by attention to scale [2].

So welcome to “Basommatophoran Pulmonate Egg Masses 101.”  This is an introductory class.  If you are a sophomore or higher in the freshwater gastropod curriculum, feel free to take the rest of this essay off, and I’ll see you next month.

For those of you still with me.  Last week I went down to my local pond and collected adults from the three most common pulmonate populations in the Charleston area – Lymnaea (Pseudosuccinea) columella, Physa acuta, and Helisoma trivolvis.  I isolated individual snails in my standard 10 oz. plastic drinking cups, fed them green flake food, and over the following 48 hours, quite a few laid eggs.  I allowed the eggs to mature for five days, dumped the water from their cups, and trimmed representative egg masses out with a pair of scissors, still attached to their cup walls.  I then photographed one image directly down through each mass, and a second image obliquely (dewatered, propped up in a little finger bowl) to give a feeling for third-dimension thickness.

The photo above shows a typical lymnaeid egg mass about five days old.  The clear, colorless, elongate, sausage-shaped mass depicted is approximately 12 mm in length, each of the 25 - 30 embryos it contains approximately 0.7 mm in diameter.  It is covered with a relatively tough membrane.  The standard shell length of its mother was 11.5 mm.

The second photo in this series shows a typical planorbid egg mass, also about five days old.  The 25 - 30 embryos are very similar in size to the lymnaeid embryos depicted in the first photo, but the mass is irregularly ovoid in its outline, with a maximum dimension of about 7 mm.  This mass is also covered with a relatively tough membrane.  Its mother bore a shell 13.2 mm in diameter.

Notice, interestingly, that the planorbid egg mass is tinged slightly brown or orange, in contrast with the entirely uncolored lymnaeid mass.  Planorbids are famous for their serum hemoglobin, and it seems likely to me that the slightly orange cast may indicate a bit of heme in the matrix.  The development of Helisoma embryos also seems a bit more advanced at day five than lymnaeid embryos.

The third photo in this series depicts a typical physid egg mass, similar in size and age to the lymnaeid and planorbid masses.  The matrix in the Physa egg mass is obviously much more gelatinous in its character, however, missing the relatively tough outer membrane.  The standard shell length of the mother of this brood was 9.1 mm. 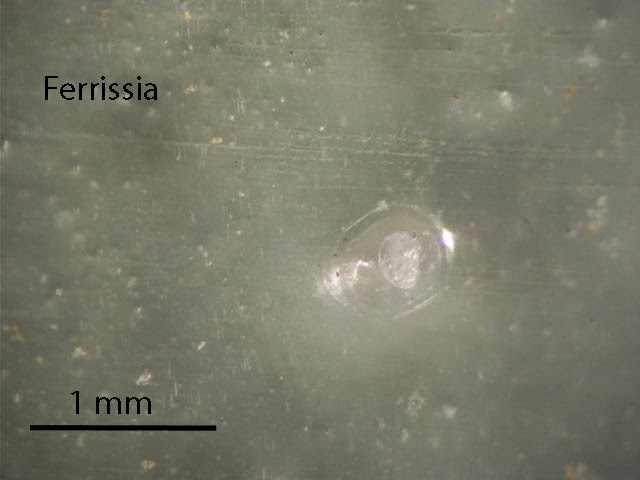 To be complete, I might add a fourth image to the gallery, depicting a singleton egg of the ancylid limpet Ferrissia fragilis [3].  Ferrissia reaches maturity at a much smaller size than Lymnaea, Helisoma, or Physa, and hence one might not be surprised to discover they do not lay an egg “mass” at all.  The singleton embryos of Ferrissia are a bit smaller than the embryos of the other pulmonates as well, approximately 0.60 mm diameter, and surrounded by a rather spare capsule.

I will conclude this lesson by noting that the size of freshwater pulmonate egg masses is a function of their number of embryos, which may vary greatly.  In culture it is not uncommon to see Physa egg masses with 60-80 embryos, for example, roughly comparable in total volume to that of their mother.  And production of one such egg mass every 24 hours is not unusual.

Even casual observations such as these cannot fail but impress the student with the potential for great reproductive output mounted by freshwater pulmonate snails.  Might pulmonates “over-reproduce” and expire, like spent salmon?  Readers interested in a comprehensive review of life history strategy in freshwater gastropods generally, together with a consideration of spent-salmon semelparity, are referred to my (2000) book [4].

Thus ends the introductory lecture on the egg masses of freshwater pulmonates.  Coming up next month – advanced topics!