Dispatches From The Viviparid Front

The notes, emails, and news items that our many friends send us from around the Americas often include interesting tidbits about the progress of freshwater gastropod invasions. But it occurs to me that it's been a few years now (1) since we've shared any of these updates with the group. So below is a sample from the old mailbag regarding the invasive viviparids, offered for general edification.

Citizens' Watch. Earlier this year our good friend Joan Jass of the Milwaukee Public Museum called my attention to a citizen-based invasive species monitoring program in Wisconsin. The Wisconsin "Citizen Lake Monitoring Network" (2) involves (the rather more ordinary) water quality and remote sensing components as well as a formal watch for a variety 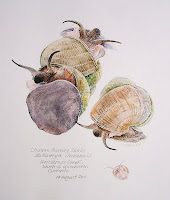 of invasive weeds, zeebs, the rusty crayfish, spiny waterfleas, jellyfish, Potamopyrgus (not arrived in Wisconsin as yet) and the invasive viviparids. Chapter 7 of the WI-CLMN Training Manual is a genuinely impressive 18-page "Mystery Snail Monitoring Protocol" (3) packed with good info on both Bellamya and Viviparus georgianus, which our good friend Pieter Johnson (4) seems to have been involved in developing.

Although many states apparently sponsor citizens' monitoring programs of their aquatic environments, it is my impression that invasive species components may be very unusual. Joan sent me links to the programs of Minnesota, Iowa, Illinois (5) and Michigan, but I didn't see invasive species specifically mentioned in any of them. And here in The South, the artificial impoundments into which viviparids have been introduced are inhabited almost nothing but invasive species, including us. It would be easier to tally the native species in South Carolina lakes, and monitor the invasive species by subtraction.

The image of the pretty watercolor above (6) comes to us from artist Aleta Karstad by way of Frederick Schueler, her husband and colleague at the Bishops Mills Natural History Center in Bishops Mills, Ontario.

Citizens Arise! A couple weeks ago our good friend Fred Schueler (7) reported to us that he had joined a small band of citizens from the vicinity of Winchester, Ontario, in an attempt to "control" a population of Bellamya chinensis inhabiting a three kilometer length of stream by dint of hand collection. Actually Fred tended to refer to this small tributary of the South Nation River as a "drain" in the extensive field notes he sent me, as it is managed by the municipality to drain land for agriculture. Although its large Bellamya population seems to have come to the attention of the South Nation Conservation Authority (which organized the event) only in 2010, subsequent conversations with the landowners suggest that the invasion itself may have occurred as much as 15 years ago.

The field conditions that Fred and his colleagues encountered were most trying. The accessible portions of the stream were apparently quite marshy or muddy, and a substantial fraction of the snail population apparently burrowing. The weather did not cooperate. Fred described the two-day event as "bound to be a token effort." Nevertheless, the team hand-collected, removed and measured a total of 1,260 adult B. chinensis from eight sites along the 3 km "drain." The fate of the Winchester 1,260 was still to be determined at last report. I suggested to Fred that he might mark at least some fraction of his catch, return them to the drain, and repeat the process next year. Fred was looking for recipes. We'll keep you posted.

ITIS Irritation. Last month I also swapped a couple emails with a Sea Grant outreach specialist at the NOAA Great Lakes Environmental Research Laboratory. It is the duty of this particular public servant to track invasive species for the Great Lakes region, and I was sent a couple photos of B. chinensis to confirm, which I was happy to do. So when I replied with my identification, I was informed that, "We are currently listing Chinese mystery snails as Cipangopaludina chinensis malleata (Reeve 1863). We use ITIS as our primary authority for nomenclature - ITIS does not accept the shift to Bellamya."

I certainly do understand why the Gubmint finds it expedient to maintain an "Integrated Taxonomic Information System," I really do. And I also understand why, once a name is assigned to a thing, they don't want to change it. And I understand that ITIS follows the Turgeon et al (1998) AFS Special Publication #26 (8), which in turn follows the freshwater gastropod names current in the 1980s, when Burch's work was published. But I hope our colleagues at ITIS don't go home at night and tell their children that mommy or daddy is a scientist. Because the names that evolutionary biologists assign to populations of organisms are scientific hypotheses, and to "not accept" a new hypothesis is worse than unscientific, it is anti-scientific.

Barbarians at the South Gate. Back in June of 2010 I got a nice email from our good friend Gabriela Cuezzo at the Universidad Nacional de Tucuma'n in Argentina. She reported that she had discovered a population of large snails that might be Bellamya japonica in th

e central Argentinian province of Cordoba, and as gastropods of the family Viviparidae are entirely absent from the native fauna of South America, she was anxious to have her identification confirmed. Her small shipment took over a month to arrive here in Charleston via "snail-mail," but when I unwrapped the specimens I was surprised to discover neither of the big Bellamya species that have spread over so much of North America, but rather a somewhat smaller-bodied viviparid I think is probably Bellamya (or Sinotaia) quadrata (above). Gabriella reported this invasion at the VIII CLAMA meeting in Puerto Madryn in June of 2011 (9).

I suppose it's only a matter of time until there is but one single, homogeneous, worldwide biota, zoned identically from pole to equator, mirrored north and south. When all the local faunas are outcompeted and extinct, our friends at ITIS should be pleased to find many fewer species to "not accept" research on.

Notes
(1) Our last news bulletin on viviparid invasion was "Bellamya (Cipangopaludina) News," way back on [6Oct05]

(2) Wisconsin Citizen Lake Monitoring Network
(3) All the chapters are conveniently downloadable as separates directly from the WI-CLMN publications page [here], including the "Chinese and Banded Mystery Snail" Chapter 7, which is indeed impressive, once you get beyond the sinistral stylommatophoran on the cover page.

(4) Pieter played a leading role in the research group who elucidated the "Community Consequences of Bellamya Invasion" [14Dec09].

(5) Actually, the Illinois Ecowatch Network website seems to have been taken down recently, and a lot of Minnesota links seem to be missing as well. State budgetary woes, perhaps? Minnesota does seem to fund Invasive Species Prevention "Grants and Partnerships," however.

(6) Karstad Biodiversity Paintings: Adventures in the Color of Canada [29Aug11]

(7) Fred Schueler seems to be a fellow-traveller in the blogosphere. He also made a guest appearance in Aydin Orstan's post "Cepaea nemoralis at Bishop's Mills." See Snail's Tales [24Aug11]

(8) To some extent, I blame myself for the Turgeon debacle. I vividly remember when the American Malacological Union was approached about collaborating with the AFS on the 1998 "Common and Scientific Names" of mollusks publication. I did not participate, largely because I thought it absurd for a bunch of PhD scientists to fabricate "common" names. But had I realized that AFS Special Publication #26 would become enshrined as the sacred list of all allowable names, scientific as well as common, for the entire American mollusk fauna forever, I would have done more than sit idly by. I would have fought the entire concept itself tooth and nail.

(9) VIII CLAMA - Congreso Latinoamericano de Malacologia 2011, Puerto Madryn, Argentina. Gabriella's abstract is on page 226 of the "Libro de Resumenes" available from the site.
Posted by Rob Dillon at 11:35 AM No comments: