When Art and Science Collide

Last fall I received an unusual email from Mr. Mark Wentzel, a sculptor living in the Atlanta area, bearing the subject line “L. columella.” Mr. Wentzel explained that he was working on an art exhibition for the Rollins School of Public Health at Emory University, and inquired whether there might be “a source for ordering Lymnaea columella shells,” or if not, advice as to “a good method (or locality) of obtaining one. I was intrigued. 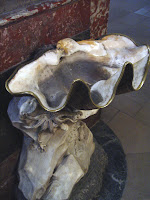 Connections between the Mollusca and the visual arts have a long and lavish history. Seashells, in particular, become decorative items almost untouched by the hand of man, save for a good cleaning. Entire coffee-table books have been dedicated to seashells as adornment in the primitive peoples, seashell motifs in the works of the renaissance masters, sailor’s valentines, X-ray photographs, and so forth. Upon entering the church of St. Sulpice in Paris, one finds the holy water contained in a massive pair of Tridacna valves, gifts from Venice to Francis I. How they got to Venice in the early 16th century, God knows.

Freshwater gastropods, however, are not decorative. One could certainly fashion the image of a freshwater snail into a logo and put it on a tee shirt. But I cannot (off the top of my head) think of any works of visual art, intended to stand alone, featuring our favorite creatures.

So I struck up an email correspondence with Mr. Wentzel to learn more about his project. Fishing for a connection to public health, I asked if his interest in L. columella might be somehow tied to the potential of lymnaeids to host fascioliasis. He replied that “Fascioliasis comes into play, but mostly as a metaphor.” More directly, the work he was contemplating “involves water, a Vietnam era Mk2

hand-grenade, a four-gallon Mason, lead drinking cups, and the unfamous (sic) L. columella, an indirect nod to Lucius Junius Moderatus Columella, the Roman author of De Re Rustica, including significant early contributions to the field of food preservation.”

The exhibition opened in December, under the title “4 Fields: Science and Environmental Health from a Creative Point of View.” [Click the image above to read the flyer.] I have not been to Atlanta to view the works first hand, but my overall impression, judging from the brochure, is that it is complicated. The title was “borrowed from the concept of the four sub-fields of anthropology” which turn out to be (according to Wikipedia) physical anthropology, cultural anthropology, archaeology, and linguistics. The connection between anthropology, sculpture, and environmental health is obscure to me. As well as many other things. 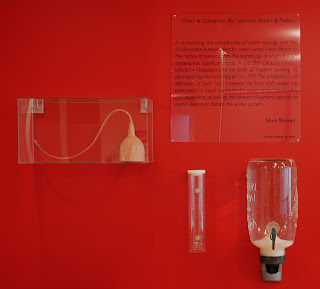 The figure above shows Mark Wentzel's entire work [click for enlargement]. Our Lymnaea columella shells have been given rubbery little bodies and affixed to the tip of a Pasteur-style swan-necked flask at the far left. The hand grenade appears as a spigot for the 4-gallon mason. A close-up of the most exciting part of the piece is shown below. 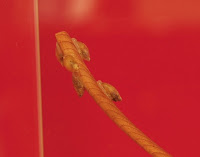 The next paragraph is going to be boring and obvious, but bear with me. I’m getting ready to make a point.

Art and Science are two entirely different things. Mark Wentzel works in a world with its own unique language, culture, and set of values that are entirely different from, no better and no worse than, the world in which I live. This does not mean that artists and scientists cannot work together. Our worlds are not incompatible. But neither are our worlds compatible in any sense, either. They are just completely, utterly different.

Now scratch out the word "art" in the paragraph above, an insert the phrase, “law and public policy.” The paragraph will remain just as true. Science is no more compatible with public policy than it is with fine art.

Last month I got a (rather routine) email from a DNR biologist working on a revision of the South Carolina priority conservation invertebrate species. He wanted to know what freshwater gastropods in our state might be “of conservation concern.” So I pointed him to Table 1 on the Freshwater Gastropods of South Carolina website, where all 32 of our species are ranked by their abundances at many hundred sampling sites. My own (completely subjective) opinions regarding which of those species might warrant some conservation concern are to be found under "Recommendations" on that same site.

But in a larger sense, the concept of "conservation concern” in law is no more scientific than the concept of “beauty” in the fine arts. Neither can be measured, and hence science has nothing to say about either.

I was happy to send data to our DNR biologist, just as I was happy to send Mr. Wentzel some shells of L. columella. But I would never dream of pretending that science figures into my interactions with the latter world. Why do we continue to imagine that science can enter into the former?
Posted by Rob Dillon at 6:23 PM 5 comments: