The rate of scientific advance on the invasive species front always seems to far outstrip the (rather languid) research progress we seem to log on any of our native freshwater gastropod fauna.  Thus it has become our occasional custom to publish batches of news to catch us up on particular invasive species, bundled for convenience.  So here, for the general edification of the readership, are four news items featuring Pomacea.

Clarifying the Identities
A laurel, and hearty thank-you are due to our friend Ken Hayes and his colleagues at the University of Hawaii (and elsewhere) for their contribution published late last year in the Zoological Journal of the Linnean Society, “clarifying the identities of two highly invasive Neotropical Ampullariidae” [1].  This is research from the old school, emphasizing comparative anatomy, histology, biogeography, and traditional taxonomic scholarship to resolve a problem that has bedeviled the Pomacea community for 200 years, both North American and South.  I am persuaded that the most common invasive species here in the southeastern United States is best identified as Pomacea maculata (Perry 1810), rather than P. insularum (d’Orbigny 1835) as most workers have previously supposed, and have updated the FWGNA page accordingly [2]. 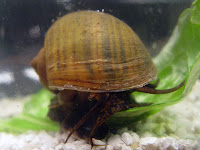 Ken’s primary focus is the distinction between P. maculata (previously insularum) sampled from Florida and the other common invasive species of global import, Pomacea canaliculata, sampled from Hawaii.  If I have any quibble with his study [3], it would be that no mention is made of P. canaliculata in Florida, which leaves me wondering about the reliability of reports by Florida natural resource agencies [4] that both species co-occur widely in The Sunshine State.

And do P. maculata and P. canaliculata hybridize?  In the final paragraph of their discussion Hayes and colleagues mention “possible hybridization events,” although we are offered no details.  Then what is the basis of the reproductive isolation between them?  There have been several nice descriptions of mating behavior and sex pheromones in Pomacea [5] – mate choice tests would appear to be low-hanging fruit.  Any students out there looking for a good thesis research topic?

Modeling the Invasion
Kudos are also due to Jeb Byers and his colleagues at the University of Georgia for their paper published in PloS ONE this past February, “Climate and pH predict the potential range of the invasive apple snail (P. insularum) in the southeastern USA” [6].

Jeb based his model on Pomacea records from the USGS Nonindiginous Aquatic Species Database (accessed in late 2009) cast onto a presence/absence grid of 1x1 km plots.  The (N=68) such plots where invasive Pomacea was present were primarily Floridian, but extended into six other states: TX, LA, MS, AL, GA and SC.  Jeb and colleagues also pre-screened 19 climate variables from BioClim to pick two of temperature and three of rainfall, and downloaded pH data from the USEPA Storet database.

The weakness of inferences based on any such model are fairly obvious – if the vast majority of the 1x1 km plots are suitable, but still have no invasive Pomacea, how strong can be the inference on absence?  But I do think the author’s prediction that the pH may prove too low for Pomacea in the Okefenokee Swamp should be robust, which is good news.

Dispatches from the Front
And indeed, our good friend Maj. Alan Covich has just returned from a scouting expedition to the Okefenokee Swamp at the head of a large detachment from the Society for Freshwater Science.  No enemy activity is reported in the area.

Meanwhile, reports from the Department of South Carolina are mixed.  On the positive side, the northernmost population of Pomacea does not seem to have advanced beyond its beachhead at Socastee [7].  A colleague and I canoed the Intracoastal Waterway downstream from the site of introduction last summer, finding no evidence of Pomacea at any point in our trip.  It was our impression that the habitat may prove unsuitable.

The tidal fluctuation in the Intracoastal Waterway at Socastee is at least two feet (as witnessed from the photo below) to which one must add over a foot of slosh for the wake of passing motorboats.  The water is quite darkly stained and the cypress canopy generally dense throughout the shallows, both of which tend to keep aquatic macrophytes at negligible densities.  We simply did not see much food or habitat for Pomacea in that particular part of the world.

On the negative side, however, the Socastee population itself still appears quite healthy in the weedy ponds and ditches where it was first reported in 2008.  This despite the fact that the winter of 2009-10 was one of the coldest recently experienced in South Carolina [8], with a low of 18 degrees F recorded on January 11 at Conway, 10 miles to the north.  From the standpoint of climate, I am afraid that Jeb Byers’ map may prove a robust predictor, as well. 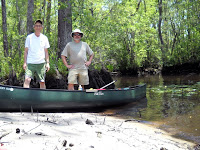 And also on the negative side, in August of 2010 word reached us of a second introduction in South Carolina, this at Lake Marion just south of the I-95 bridge.  Our friend Larry McCord of Santee Cooper (the utility that administers the lake) reported that “the population has been treated with a low level of copper in hopes to avoid spread to other areas.”

With large populations of invasive Viviparus georgianus, V. subpurpureus [9], and Bellamya japonica jostling each other for grazing room on its dense beds of Corbicula, Lake Marion was already wearing the yellow jersey in this year’s “Tour de Malacological Infestation.”  Now Pomacea is threatening to eat all the invasive waterweed as well.  Bummer.

Poisonous eggs
I long ago ceased trying to understand why particular odd little snippets of scientific trivia find their way into the popular press.  But in early June a PLoS ONE paper by M. S. Dreon and an international team on toxic Pomacea eggs [10] was selected for feature by the AAAS online organ “Science Now" [11] and then propagated around the world by e!Science News, Reddit, Facebook, and what have you.

The “hook” used by Science Now was that the composition of Pomacea egg neurotoxin is “unusual for animals” and that “the apple snail creates it in an unprecedented way.”  But were I the editor of some popular science outlet, or indeed one of the authors trolling for popular attention and looking for bait, I would have emphasized the weirdness that any toxin should be found in any egg at all.

Embryos are edible.  Somewhat counter to the statement of Dreon and colleagues that “many invertebrates defend their eggs by endowing them with deterrent chemicals,” across all of evolutionary biology, plants and animals alike, the phenomenon is stunningly rare [12].  It is easy to observe that a mother-ampullariid must value her (relatively large) eggs much more highly than a mother-physid or a mother-pleurocerid, but when we expand the comparison to a mother-hen, a simple adaptationist explanation becomes more difficult to sustain.  Although Orians & Janzen punted their original 1974 article with “it is possible to be toxic if one is an embryo, but under most circumstances it isn’t worth the price,” they ultimately concluded, “We think that refining this answer is worth the price.”  Are we any closer to refining this answer if, now 40 years later, we have forgotten the question?

[2] The (revised) Pomacea maculata page on the FWGNA site [html]

[3] Actually, it would appear that I have listed more than one quibble above.  And add this nasty clinker from page 744, “Molecular data confirm that P. maculata and P. canaliculata are two distinct species.”  Hayes and colleagues are referring to mtDNA sequence divergence here!  Good grief.