The Duck River is our Galapagos, and Calvin Goodrich our Darwin.  Or possibly our inverse-Galapagos, and our anti-Darwin, I’m not sure.  For the brilliant evolutionary insight that Goodrich glimpsed in 1934 through the lens of this rich, fresh waterway coursing through the heart of middle Tennessee was not more species, but less.

It’s an old, old story [1], but let’s tell it again.  Prior to the dawn of the modern synthesis, North American freshwater malacology recognized at least 12 – 15 species of pleurocerids in the Duck River, probably more.  The lower reaches of the Duck (e.g., Wright Bend site E) were inhabited by heavily-shelled, “obese” populations identified as Lithasia geniculata, distinguished by their shells with prominently-shouldered whorls.  The slightly-less-obese, smooth-shouldered populations of the middle reaches (e.g., US41A, at site C) were identified as Lithasia fuliginosa.  And the headwaters of the Duck River (e.g., Old Fort site B) were inhabited by Anculosa pinguis, lightly-shelled populations without any shoulders on their whorls at all.

In 1934, Goodrich published his “Studies of the Gastropod Family Pleuroceridae I,” in which he synonymized all these forms as subspecies under L. geniculata [2].  He just did it, at the top of the section, without making any sort of declaration, or using any form of the noun “synonym,” as though his unique insight were already an article of established malacological doctrine [3].  He then meticulously documented, town to town and bridge to bridge down the length of the Duck, the gradual transition of the three subspecies from one form to the next.

Even to me, his latter-day apostle, Goodrich’s 1934 intuition about the plasticity of shell phenotype in freshwater gastropods was startlingly profound.  His “Studies in the Gastropod Family Pleuroceridae” series inspired me to coin the term “Goodrichian taxon shift” in his honor in 2007, subsequently generalized to cryptic phenotypic plasticity (CPP) by Dillon, Jacquemin and Pyron in 2013 [4].
So, six years later, Goodrich published a paper reviewing the taxonomy and distribution of the pleurocerid fauna of the Ohio River drainage in its entirety, not just the Lithasia of the Duck River but all species in all seven genera in a vast region touching 14 states [5].  And the only other population of Lithasia geniculata pinguis of which he was aware inhabited the Caney/Collins drainage of the Cumberland River, the headwaters of which interdigitate with the Duck immediately to the east, in the vicinity of McMinnville. 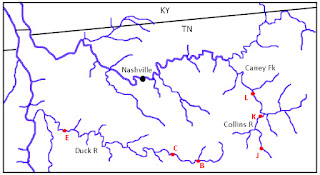 But alas, even in Goodrich’s day the diverse pleurocerid fauna of the Tennessee/Cumberland was rapidly disappearing in the face of impoundment, canalization, and widespread development for navigation and hydropower across the southern interior.  The Caney/Collins system was terribly impacted by the impoundment of Center Hill Lake in the late 1940s, and the same almost happened in the Duck River in the 1970s, themes to which we shall return.  Motivated by longstanding conservation concerns, in 2003 our colleagues Russ Minton and Chuck Lydeard undertook to construct a gene tree for the North American genus Lithasia [7].
Russ and Chuck a good job rounding up samples from 11 of the species and subspecies of Lithasia listed by Goodrich/Burch, 25 populations in all, sequencing in some cases as many as 6 individuals per population.  From the Duck River Russ and Chuck sequenced one population of L geniculata geniculata (1 individual), three populations of L. geniculata fuliginosa (1, 3, and 3 individuals), and one population of L. geniculata pinguis (6 individuals).  And they also included 2 individuals of nominal Lithasia geniculata pinguis from a Caney/Collins population.  And here is their gene tree:

To completely unpack the message being telegraphed to us by the enigmatic arboreal specimen figured above would require at least 6 – 8 blog posts of standard length [9].  But for the present let us focus on just the two little branches labelled “geniculata pinguis” that I have circled in red.  The two sequences obtained from the 6 individuals sampled from the Duck River, D1 and D2, cluster with all the other Lithasia.  And the two sequences obtained from the Caney/Collins system, C1 and C2, are way off with pleurocerids of other genera.  To quote Minton & Lydeard verbatim: “Further work needs to be undertaken to determine the identity and placement of the Collins River taxa.”

Thanks, Captain Obvious! If Calvin Goodrich had enjoyed access to collections from the Caney/Collins system of the same quality and detail that he enjoyed for the Duck, he might well have recognized a gradual progression in the shell phenotype of Pleurocera simplex quite analogous to that he documented for Lithasia geniculata in 1934.
Most of the headwaters of Caney Fork and its tributaries (e.g., site J) are inhabited by rather typical-looking populations of the widespread Pleurocera simplex simplex, no different from those one might find in tributaries of the Holston River around Saltville, VA, from whence the species was described by Thomas Say in 1825 [11].  We featured the P. simplex population inhabiting Pistol Creek at Maryville, TN in a series of essays published in 2016 [12], and the P. simplex population inhabiting Gap Creek, TN, last month [13].  All of these populations are darkly pigmented, and bear gracile, teardrop-shaped shells such as shown in figure J below.
And all those populations inhabit small creeks and streams primarily of groundwater.  In East Tennessee, populations of Pleurocera simplex do not typically extend into larger rivers [14].
But in tributaries of the Cumberland, Kentucky, and Green Rivers, Pleurocera simplex populations often do extend into rivers of substantial size – as long as the currents are good and the rocky substrate they require does not entirely give way to mud.  Here their shells become heavier, chunkier, and more lightly-pigmented.  Goodrich [5] identified paler, heavier-shelled populations such as are found in the Collins River at site K as “Goniobasis ebenum (Lea 1841).”
And in the largest rivers of the Caney/Collins system (e.g., site L), populations of P. simplex are so robustly shelled that they can easily be confused for Lithasia geniculata pinguis.  I speculate it may have been a sample of P. simplex that Minton & Lydeard collected from the Collins River back in 2003, demonstrating intrapopulation morphological variance so extreme as to prompt an (erroneous) identification of Lithasia.
To be clear.  Bona fide populations of Lithasia geniculata pinguis do indeed inhabit the Caney/Collins system, as Goodrich stated.  But they are typically sparse, and often swamped by dense populations of P. simplex.  Pleurocera simplex populations do not range west into the Duck River drainage, however, and so confusions of this sort did not complicate the story Goodrich told us in 1934.
So broadening the subject out through the rest of Middle Tennessee and into Kentucky.  What is this enigmatic taxon described by Isaac Lea in 1841, "Melania" (aka Goniobasis, aka Elimia, aka Pleurocera) ebenum?  Goodrich [5] identified ebenum populations through most of the Cumberland River drainage, from “Cumberland River above the falls” through “Smith’s Shoals, Pulaski County, Kentucky” west beyond Nashville to “springs and small streams” in Dickson County, Tennessee.  Could all these populations that Goodrich called "Goniobasis ebenum" be pale, triangular, robustly-shelled P. simplex?  Stay tuned.

[1] The best entry into this literature would be to purchase FWGNA Volume 3 [html] and read pages 1 – 10 and 93 – 99.  Or you could click through it piecemeal:
Both of those latter two essays feature scans of Goodrich’s Plate 1, showing the Duck River Lithasia.

[3] This is actually a bit frustrating.  Looking back on Goodrich’s body of work, there is almost never anything quotable – some “Aha moment” where the fullness of his vision is revealed.  Like Charles Darwin.

[6] This is a difficult work to cite.  J. B. Burch's North American Freshwater Snails was published in three different ways.  It was initially commissioned as an identification manual by the US EPA and published by the agency in 1982.  It was also serially published in the journal Walkerana (1980, 1982, 1988) and finally as stand-alone volume in 1989 (Malacological Publications, Hamburg, MI).

[8] The best entry to this complex and long-running theme would be to read FWGNA Volume 2 [html] in its entirety.  Or for a quick lick at the problem, see my essays:
[9] Actually, I’ve already dedicated one blog post [10] to exegesis of the obovata1/obovata2 branch way down below the Caney Fork sequences.  And maybe in a few months we’ll come back to the geniculata/fuliginosa/duttoniana problem in the Duck River and look at that in more detail.

[12] I explored the complex relationship between Pleurocera simplex and P. gabbiana in East Tennessee in a series of three blog posts in 2016:
[13] We opened our series on CPP in Pleurocera simplex last month with:
[14] Rocks and riffles in the mid-sized rivers in East Tennessee are often covered bank-to-bank by dense populations of Pleurocera clavaeformis and Leptoxis praerosa, neither of which ranges into drainages of the Cumberland.  I wonder if East Tennessee populations of P. simplex are restricted to smaller creeks and streams by grazing competition?

Posted by Rob Dillon at 8:07 AM No comments: